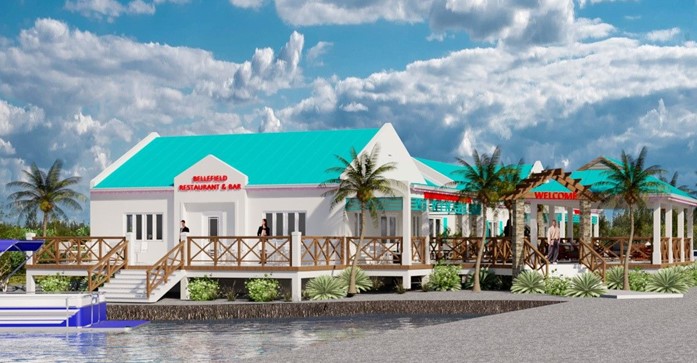 On signing of the contact Chairman Francis stated,  “We’ve worked hard towards this, it is good to see our hard work paying off, the people of North and Middle Caicos would be pleased for this, it will improve not only tourism on these Islands but the whole destination.” Chairman Francis also indicated he was pleased that Mr. Higgs, ‘an island boy was awarded the contact’.  Mr. Higgs expressed his delight on being awarded the contract, he said “I am happy to be working with the Ports Authority again, I pledge to deliver the best possible product.”

Bellefield Landing is the hub for agriculture and craft exports and bourgeoning tourism developments on North Caicos and Middle Caicos, centered around for day trip visitors from Providenciales.

The Port Office/ Welcome Center will consist of a restaurant, space for rental as shops, a port office, car park, gazebo and other tourism amenities. The project should commence immediately and has a construction duration of one (1) year. A date for project ground breaking ceremony will be announced shortly.

Director of Ports Delton Jones indicated “the Welcome Center project is part of plan for the phased development of Bellefield Landing. The plan is for Bellefield Landing to become a community port; catering to tourism traffic and regular trade and shipping to support prosperity on North and Middle Caicos.”

The project for the development of Bellefield Landing begun with the clear-up of Bellefield Landing earlier in 2021, to improve the aesthetics of the port facility. Other projects which should commence in the new financial year include preparation of a master plan; clean-up (to remove sunken vessels) and dredging of the turning basin, coastal structural improvements and installation of safe boating slips.

THE RITZ-CARLTON DEBUTS IN TURKS & CAICOS, BRINGING THE ULTIMATE IN SEASIDE LUXURY TO THE WORLD-RENOWNED GRACE BAY