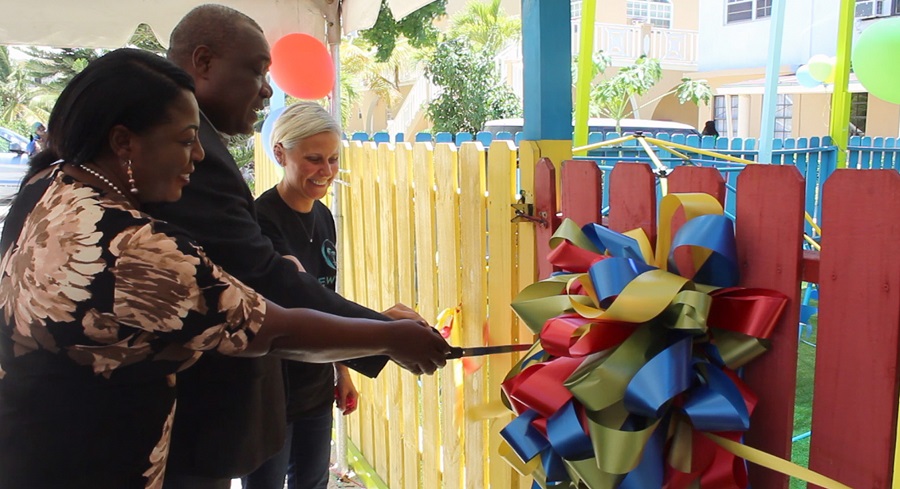 Electoral District Seven, which is Cheshire Hall and Richmond Hill is starting a trend which the Constituency managers and its Member of Parliament, Sammy Been hopes will catch on; they are working with corporate TCI to build more playgrounds and a beautiful, practical, colourful one was unveiled on Friday at Ashley’s Learning Center.
The new play spot, yet again, raises the profile for the need of more play areas for the children of the country and throws even more loving support behind the most vulnerable of the most vulnerable as it is for Special Needs youngsters.

There were lots of thank-yous for the project which was taken on by Graceway Communities, the charity arm of Graceway Supermarkets and high level attention as Cabinet Ministers and Members of Parliament turned out in fantastic numbers to see the space opened for the 20 students of Ashley Learning Center.

Angela Williams, founder of ALC explained the previous playground was destroyed in the hurricane four years ago. She talked about how ALC came to life when she needed a place for her own daughter and realised there were many other families who required a quality, specialised learning center for their special needs children. Six years later the dream lives on and numerous residents and companies continue to shower the school with necessities; this now includes Sammy Been, Member of Parliament for Electoral District 7 (ED7 Cheshire Hall & Richmond Hill) and Graceway Communities.

Children now have a plush faux lawn; in the event of any falls they would be well cushioned. There are swings, climbing wall, trampoline, jungle gym and park bench.

The area is also shaded, so the harshness of the UV rays are kept out.
Bringing remarks were Temel Seymour of Graceway Communities; Hon Jamel Robinson, All Island Member of Parliament; E. Jay Saunders, Deputy Premier and Minister of Health and Sports; Angela Williams of Ashley’s Learning Center; Hon Samuel Been MP for the district and the children – who sang beautifully, presented tokens of appreciation and gave the vote of thanks.

The Ashley’s Learning Center playground had the ribbon cut in an official opening on June 3, 2021. Cutting the ribbon were the Member of Parliament; the school’s founder and Sophie Stanbrook of Graceway Communities.