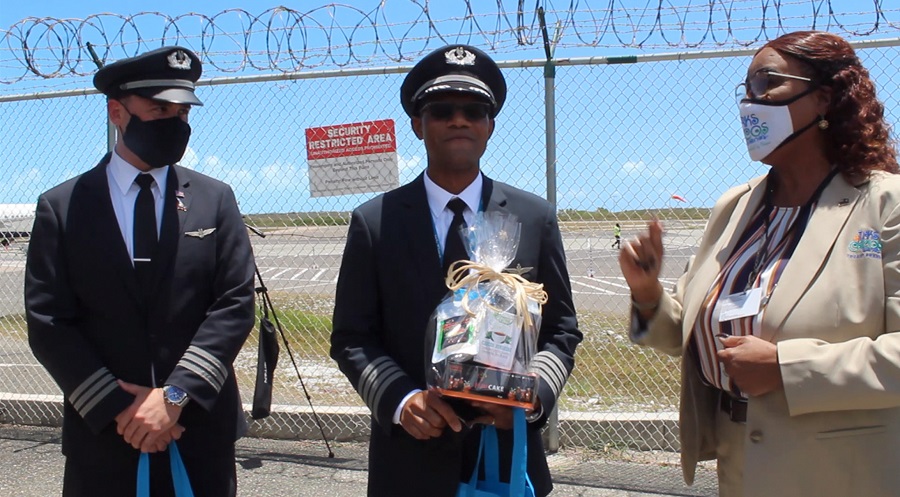 #TurksandCaicos, May 3, 2021 – It was the second time Captain Gregory Glinton has captained a commercial flight to his home country, Turks and Caicos; his fourth trip home as a pilot overall.

Thursday, marked that second time as captain… and it was to a gleeful audience of family, friends, TCI Tourist Board and Aviation officials.

Two pilots, three flight attendants and 130 passengers belonged to our Capt Glinton for one hour and twenty minutes… it was a full American Airlines flight from Miami, landing 12:53pm at the Providenciales Intl Airport.

A water canon salute greeted the plane on the tarmac; the TCI Airports Authority terminal manager, John Deveaux, making sure the pomp and pageantry befitting the accomplishment were in place.

A son of the soil, Grand Turk’s soil to be exact was happy to see so many.  He was also thrilled to receive gifts including a luxury basket loaded with TCI goodies, a golden TCI crest for his lapel and a chance to share a message with the youth.  His advice is never to give up on your dream; trust that God will place the right people in your life to help in overcoming obstacles and that you will get there in the end.

Co-pilot, Brandon Lozano said it was a smooth flight, perfect landing by the captain after travelling 525 miles over some of the most picturesque waters of the Atlantic Ocean.

Captain Glinton has been flying since the age of 22, with 27 years of piloting under his wing.