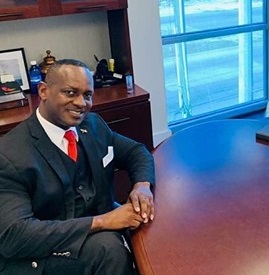 #TurksandCaicos, May 3, 2021 – Former Health Minister Edwin Astwood told members of the House of Assembly on Thursday April 29 that he does not agree with making the Covid-19 vaccine mandatory.

He compared the situation to Christianity, where salvation through Jesus is offered as lifesaving by Gospel believing Pastors; still it remains an individual and free choice.

Astwood, now the leader of opposition business in the House of Assembly for the Opposition People’s Democratic Movement informed that a negative for the virus upon entering the TCI and regular testing of work permit holders should be sufficient evidence that a migrant worker poses no threat to public health.

Hon Astwood believes public education about vaccination should have been ramped up instead, adding that civil servants should not be subjected to the more highly intrusive testing method of swab in the nasal passage on a weekly basis.

A simplified testing method should suffice, he offered, in addressing the Speaker, Hon Gordon Burton.

Assuring that it was something he would never have recommended for the people of the TCI no matter what the Centers for Disease Control (CDC) or Public Health England, (PHE) said.

His colleague, appointed member Alvin Garland did not agree however; Hon Garland publically praised the controversial, new policy of vaccination for all work permit holders.

Edwin Astwood believes given the lowered case numbers of Covid-19, it is also time for the national curfew of 11pm to be lifted.