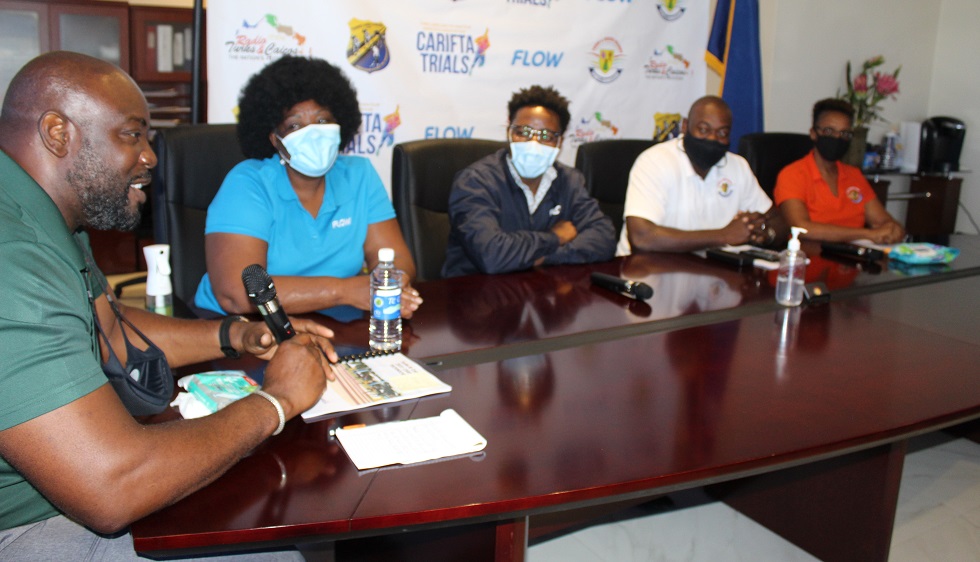 #TurksandCaicos, May 5, 2021 – TCI is set to hold the first national sporting event (CARIFTA Trials) since the suspension of all sporting activities in March last year and uniquely the athletics meet will be held to the widest audience ever but without fans in the arena.

The CARIFTA Trials scheduled for May 7-8th, 2021 in Providenciales at the National Stadium includes 57 top athletes and will be powered by Flow, with the entire competition televised for adoring fans in a first of its kind effort.

Streaming live from the National Stadium in Providenciales, the coverage will include real-time commentaries via live audio streaming on RTC 89 FM. The real-time video streaming will be on Flow TV Ch 104, Facebook Live & the TCI Sports Commission’s YouTube channel.

Briefing the country on the just one day away  CARIFTA event, the President of TCAAA, Edith Skippings, expressed her joy to watch TCI kids come out and take part.  It will welcome athletes representing all islands including some competitors travelling home from Jamaica in a bid to make the National CARIFTA TEam.

I’m so excited about these trials, saying that we will be bringing them live for the first time to you, the people of Turks and Caicos, and to the wider Caribbean. I can hardly speak, where I’m just so excited, most of all, for our kids, and so much looking forward to this event,” said Ms. Edith Skippings, expressing her joy for the return of sports actions.

The CARIFTA Games, the region’s premier junior athletics meet, is scheduled for August in Bermuda.  The CARIFTA Games were cancelled in 2020, and were delayed from Easter due to the threat of the considerable risks to public health posed by the Coronavirus Pandemic.

Some of the athletes are vaccinated, however Covid-19 vaccination is no requirement for participation in the trials.  What is required, informed Jarrett Forbes, TCI Sports Commission Director, is PCR testing for the virus.

Ms. Skippings assured parents that the protocols will afford children absolute safety as they are given the opportunity to compete and make the national team.  This means, popular elements like the relays were scrapped, though 15 events are still scheduled to delight fans.

Further, the TCAAA president revealed that every island had at least one female athlete taking part in the competitions.

Fans of athletics, family and friends of the athletes were admonished to tune in to the CARIFTA trials this weekend; cheer despite and show support to the athletes who have been training, made sacrifices and prove Turks and Caicos is blessed with talent.

Bronze Bust of Marcus Garvey to be placed at African Union Headquarters, Ethiopia