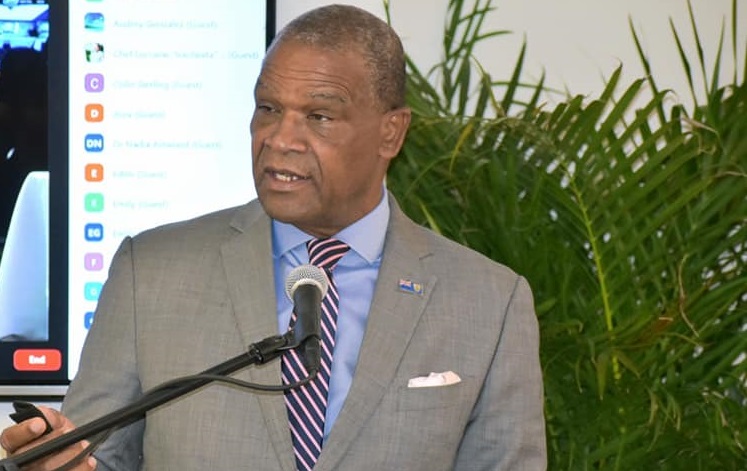 #TurksandCaicos, April 21, 2021 – It was an announcement long past due for thousands of Turks and Caicos Islanders who learned on March 1 they would benefit from the millions of dollars which had been set aside for cash support during the Coronavirus pandemic.  No hurdles to hop, no rivers to cross because the only qualification this time around was being a citizen of the country.

It was a landmark move and a rare occasion which gave the indigenous people of the territory a feeling of advantage; and it was credited to the quick work and empathy of the newly elected Washington Misick administration of the Progressive National Party.

“Less than six (6) weeks since taking office and four (4) weeks since approving this program, I am pleased to say that over twelve thousand (12,000) persons have been able to benefit from this programme with cheque distribution having begun on Friday, 26 March, 2021.

This was no small undertaking as it required the careful consideration, time and effort of a number of key stakeholders across government including the support of my Cabinet and House of Assembly colleagues, but most importantly the operational support of my Finance Team that did an excellent job in the roll-out delivery of this programme,” said Hon Washington Misick, Premier and Minister of Finance, Investment & Trade in a statement on April 9.

On the two month anniversary of winning 14 of 15 seats at the polls, Misick and his team would have another popular announcement reach the masses, via a government issued media statement. It extended the Citizen’s Relief $1,000 cash grant programme from wrapping up on April 25, to instead conclude with cheque distribution and delivery of some cheques to the end of June.

“To ease the congestion at the various TCI Treasuries and reduce the wait time for collection, approved citizen relief stimulus recipients are advised of the following amendments that have been made to the cheque distribution process: Extension of the date for collection of grant payments.  The final day for collection of Citizen Relief Stimulus cheques will be on 30th June 2021,” informed the Ministry of Finance.

The requirement for in-person collection of cheques made the already super-sized undertaking, a mammoth venture logistically and it got complicated for the Finance Team when the in-person requirement during cheque distribution could not be met by qualified and approved applicants.

For some individuals, they were trapped abroad caught in the UK lock down.  For others, medical treatment and urgent matters out of country prevented an in person pick up of the waiting cheque within the given timeframe.  In the case of the inmates at Her Majesty’s Prison, a system had not yet been agreed on how those qualified would secure their cheques and others who were simply unable to bear the long lines due to health constraints or illness; all of which represented reasonable scenarios which left hundreds out.

The PNP Administration went on record to say the purpose of the cash stimulus was to get the $1,000 into the hands of citizens of the country, to exhaust the approved $14.5 million to support residents who suffered economically over the pandemic.

“Recognizing the negative impact that the global COVID-19 pandemic has had on our islands over the last year, my government in its second but first substantive Cabinet meeting on 1st March 2021 approved the payment of one thousand dollars ($1,000) to all eligible Turks and Caicos Islanders and British Overseas Territories Citizens (BOTC) that have been residing in these islands during the last twelve (12) months,” said Premier Misick in that April 9 statement commending his finance team.

“For this, I express my profound thanks to the leadership of the Ministry of Finance, the Permanent Secretary of Finance, Mrs. Athenee Basden and Deputy Secretaries, Mrs. Shonia Thomas-Been and Mr. Stuart Taylor; the Director of ITT, Mr. Andre Mills and his team for leading on the development of the application portal and all technical requirements; the Director of Statistics and his team for providing review and vetting support; the Accountant General, Mr. Hemant Sinanan and his team for their work on the payment and distribution system, as well as support provided from the Deputy Governor Her Excellency Anya Williams, the staff of Revenue Control Unit and Customs Department on the roll out of the programme.”

Despite these efforts, there continues to be extreme lines at the Treasury’s Office in Providenciales and the department has now publically acknowledged the need to make some allowances.

“For applicants who are seeking medical treatment overseas (along with persons who accompanied them), subsequent to their citizen relief grant being approved, the cancelation of the stimulus cheque will be delayed up to the earlier of the applicant’s return to the island or three months from the date the cheque was printed.

Applicants who fall within these criteria would be required to submit a written request along with supporting documentation to the tcicitizenrelief@gov.tc email address.”

In those cases, the Treasury Office informed:  “The supporting documentation would include, but not limited to the following: Copy of travel itinerary departing and returning to and from the TCI; Medical documentation to support claim of overseas treatment; Name of Applicant and Citizen Relief Application number.”

For those, unable to physically make the journey to pick up the waiting cheques; the Treasury Office again demonstrates a willingness to have them benefit from the program.

“Citizen Relief Stimulus recipients who are disabled or confined to their home (in Turks & Caicos Islands), the Treasury will be providing a cheque delivery service to the applicants’ home.  To utilize this facility approved applicants are asked to make a written request, for the delivery of the cheque to tcicitizenrelief@gov.tc. The request must include the following:

a copy of the approved applicant ID; application number; phone number and address for the cheque to be delivered.”