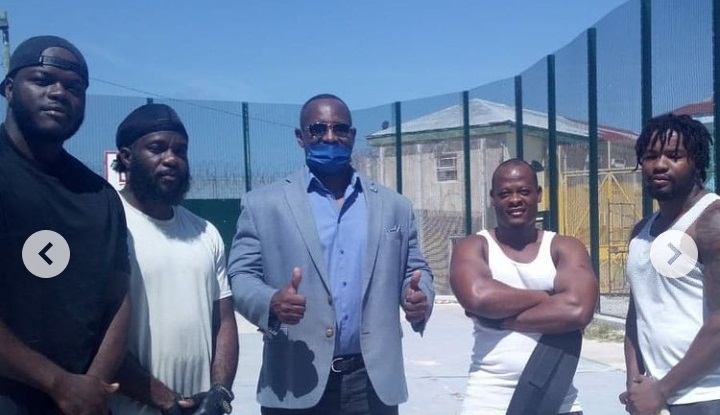 #TurksandCaicos, April 21, 2021 – Mental support and well-being are essential for every individual, including our family and friends incarcerated behind bars. That’s the incredible lesson we learn from Leader of the Opposition, (LOO) Hon. Edwin Astwood’s visit to Her Majesty Prison.

“The event itself went off perfectly, without any hitch and really and truly just about everyone being a winner in the competition.”

According to Astwood, who is also the member of Parliament for Grand Turk South and Salt Cay, his visit to the prison was mainly to support the officers and the inmates at a Weight Lifting Competition staged at the facility.

“I really want to take my hat off to Officer Taylor and his team in collaboration with some of the prison inmates who did a wonderful job of putting on this event.  I believe events like this go a long way in building positive morale  in the prison and assisting with prisoner reform.  You saw the camaraderie between prison officers and prisoners; there was friendly competition and having persons from outside also goes a long way.”

The former health and sports minister explained his support was also to promote good sportsmanship and the physical fitness competition. In his comment, the LOO Astwood emphasized the importance of the mental well-being of those who find themselves incarcerated.

“I believe events like this can also go a long way in building positive morale in the prison,” said Hon. Astwood in an interview with Magnetic Media.

Admittedly and intentionally, the Leader of the Opposition (LOO) said he only concentrated on the sporting activities of the day without deviating attention to other conditions plaguing  the prison.

“I wanted it to be purely about the sport and the inmates and the prison officers themselves.  It was just to support them,” he said in a cell phone Q&A.

LOO Astwood recommended that moving forward, there should be a return to an old tradition of having sporting teams from the community visit the prison for friendly challenges.

“I would like to see more events, where outsiders – in a controlled environment and those prisoners who are trustees on good behavior – get to interact.  It helps with them becoming re-assimilated into society.  I want to see more teams going there and you can see how sports can go a long way.”

The Her Majesty’s Prison Weight Lifting Competition was held on Friday April 16, 2021.