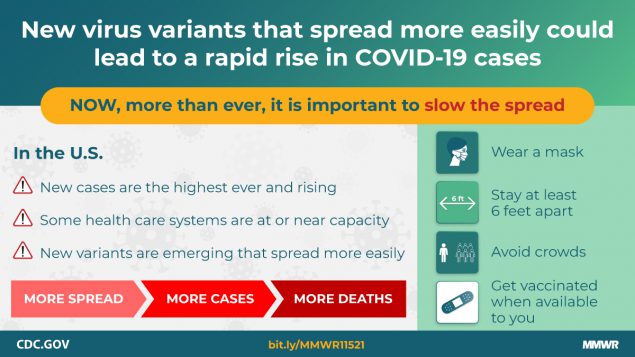 #USA, February 17, 2021 – Not to be outdone, American Covid-19 has since August 2020 been morphing in order to survive and spread and now seven new variants of itself are created; appearing in at least 30 States and taking on the names of birds for easier distinction.

The Q677P mutation impacts a crucial spike protein of the virus, informed a Forbes.com report by Dr. Robert Glatter. The news article published on Monday February 15 also said due to a lack of peer review, the analysis of the variants is conservative though the suspicion is these new variations will be found to be more contagious.

The advent of another crop of more contagious COVID could spell disaster for our friends and family in the US just as the country is experiencing a downward trend in new cases.  It also has the potential to threaten travel once again; the last string of variants elicited border closures and tougher measures for returning air passengers.

In a string of media reports, the world is learning of the mutations and how broadening genomic surveillance will be the truest gauge of the effect of Robin 1, Robin 2, Yellowhammer, Pelican, Bluebird, Quail and Mockingbird.

From the article: “Robin 1 has now been seen in more than 30 states in the U.S., mostly in the Midwest. Robin 2 appeared in early October from a sample in Alabama, confined mainly to the southeastern U.S. Another lineage, named Pelican, was initially identified in a sample from Oregon, but has later been found in 12 additional U.S states as well as in Europe (Denmark and Switzerland), Australia, as well as in India.

Pelican was the first sub-lineage or variant of particular interest to the researchers because it was found in close to 28% of viral samples from Louisiana, and 11% from New Mexico. The remainder of the Q677P sub-lineages each have less than 100 genetic sequences including Yellowhammer, predominately in the southeastern U.S, Bluebird, in the northeast U.S., Quail found in the southwest and northeast, and Mockingbird, located predominately in southcentral and east coast states.”

Almost five percent of the samples collected at GISAID between August 2020 and February 2021 have been the new variants; a total of 2,327.

One expert, Vaugh Cooper, has offered to CNN that the mutation is particularly worrisome because it is  in the region of the novel coronavirus spike protein which is key for how contagious the virus actually becomes.

Some 27.8 million Americans have been diagnosed with Covid19 and as vaccination roll out lags behind spread of the virus, it becomes a concern with the United States as the leading and in many respects the only source market for the Caribbean region including the Turks and Caicos Islands.