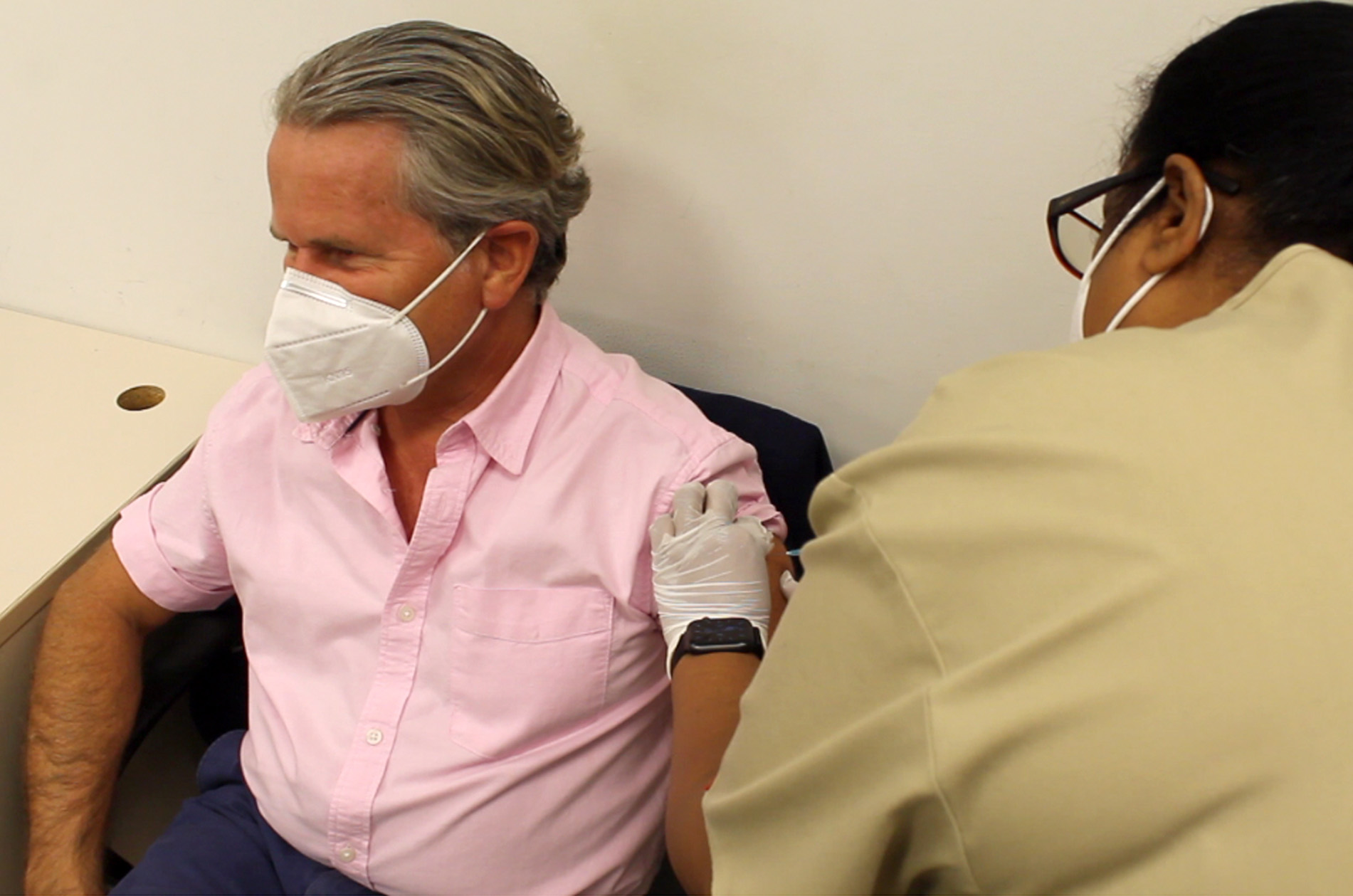 #TurksandCaicos, February 2, 2021 – Turks and Caicos residents have exhausted all of the Pfizer/BioNtech vaccines sent to the territory by the UK Foreign Development & Commonwealth Office said the Deputy Governor and Premier on Monday following their second jab at the Cheshire Hall Medical Centre in Providenciales.

“We would have been the first to get our second dose, fully vaccinated here in Turks and Caicos.  And of course as usually we are being observed for the fifteen minutes, and we would have passed that period and again I am feeling quite fine.  Last shot, I had no reaction whatsoever, not even soreness of arm, so it has been the same experience thus far (for the second jab),” said Sharlene Robinson, Premier and joint-chair of the Vaccine Oversight Committee for the Turks and Caicos Islands.

“Also today and tomorrow we are going to be wrapping up our first doses of administration. We have done quite well over the past three weeks, we’ve done extremely well and today we have vaccinated a total of 4,684 persons in the Turks and Caicos; that includes 392 persons in Grand Turk, 82 persons on the island of North Caicos and 140+ persons on the island of Parrot Cay,” said Anya Williams, Deputy Governor who is the co-chair on the Vaccine Oversight Committee.

It was also shared that clinics for vaccination against Covid-19 continued on Monday in Grand Turk and South Caicos and Salt Cay are due for their appointments to be met sometime this week.

Though Magnetic Media’s earlier report of Public Health being congratulated for success in administering over 2,000 vaccines appeared to paint the complete picture, it did not; that figure left out the private medical centers which supported the surge in demand for the shots.

The Deputy Governor said two thirds of those vaccinated received their shot at one of five private practitioners who were grafted into the vaccination roll-out via a Memorandum of Understanding; signed last month.

As cases numbers spiked, as global reports grew more grim, as the local death toll to Covid-19 soared so did the interest for the vaccine.

“Now we are seeing a mad rush, when we are literally at the end and so there are persons who are coming up now, I say to you: don’t be discouraged, you have to now wait until the second batch.  But we are still keeping for senior citizens and frontline workers because it is very, very important that we vaccinate that group,” said the Premier.

Registration for the Covid-19 Vaccine continues as the TCI feels confident of the next batch; though how it will get here is a work in progress with British Airways flights suspended until March.

“The complication for us is that persons may be aware that BA has cancelled their direct flights at the moment so we are still working on transportation and how we are going to get the vaccine here into the islands; so we are working very closely with the Foreign and Commonwealth Office on that as well.  Even the government we are leading to see how best we can assist, even if there is a cost to us  because we know that the first batch of vaccines were provided completely free of charge by the united Kingdom,” said Her Excellency, Anya Williams.

If your preference is for the AstraZeneca, Moderna or Johnson & Johnson branded vaccines; it is unlikely you will get them in Turks and Caicos, said HE Anya Williams.

The world is clamoring now for the coveted vaccines due production demands and shortage in supply; still co-chair of the TCI Vaccine Oversight Committee, Premier Sharlene Robinson explained Turks and Caicos remains in a good position to meet its target of vaccination for all adults due to its population size.

“I think we are in a very, very, good place in terms of being able to advocate to the UK, we are a very small population so that’s the beauty of it and they are very committed to assisting the overseas territories.  Again, we have to appreciate what privilege this is because there are so many leading independent countries in the region that are trying to get into arrangements,” the Premier added, “We have demonstrated, in this first batch that there is an uptake, that people are interested that’s why it was so important what happened with the first batch so that we could make a case for the additional.”

Among the other country leaders getting that second jab at the Cheshire Hall Medical Centre today were His Excellency, Nigel Dakin, the Governor and his wife Mandy; Hon Karen Malcolm, the Minister of Education and Dr. Denise Braithwaite-Tennant, CEO of the TCI Hospitals.

The remaining available doses of the vaccine are reserved for South Caicos, Salt Cay and priority people on those islands.

The UK, on January 7, 2021 sent enough doses of the vaccine to inoculate four thousand, eight hundred and seventy five people in the Turks and Caicos Islands.