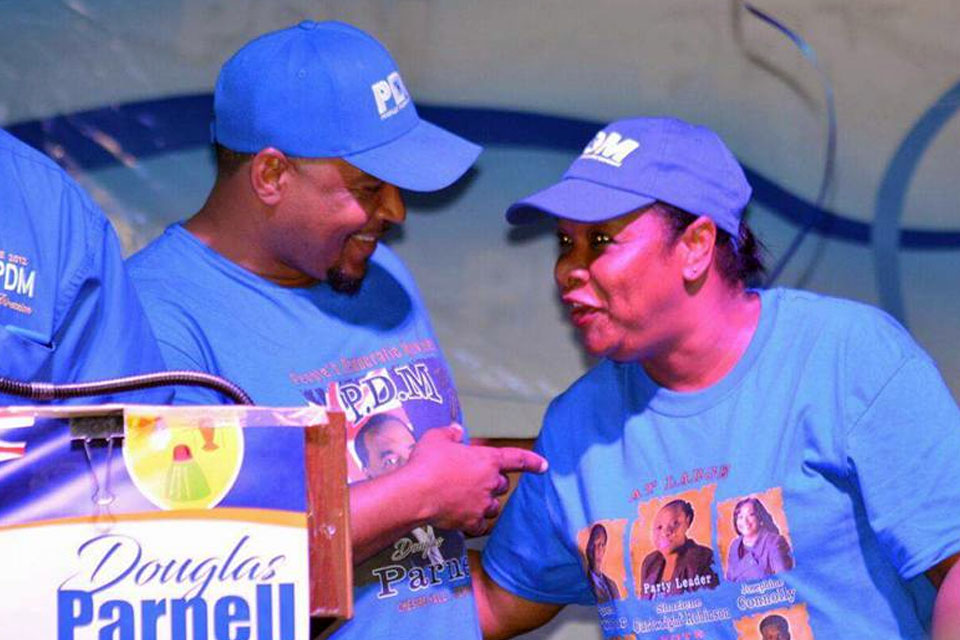 #Providenciales, September 11, 2020 — The People’s Democratic Movement has toned down the glaring truth about this weekend and a party leadership challenge announced as the highlight of the PDM’s 2020 National Convention; that a faction of the party believes it is time for a new captain at the helm of the PDM ship.

In mere hours, the individual who will lead the People’s Democratic Movement into the next Turks and Caicos general election will have been decided by delegates in this weekend’s caucus.

On Monday, the PDM announced a National Convention was slated for September 11-12; however little else was said about what is now shaping up to be a momentous meeting due partly to the coronavirus pandemic and largely to the fact that party leader and sitting premier, Sharlene Robinson is being challenged for that party post by Douglas Parnell.

Robinson is the first female leader of the Opposition, of the PDM party and of the Turks and Caicos Islands.  In both the 2012 and 2016 general elections she enjoyed enormous popularity among voters; ranking at the top of the all-island candidates at the polls.

This fact has not fazed Doug Parnell, the PDM National Chairman who unseated the PNP in the Richmond and Cheshire Hall constituency in 2016.  Parnell has served as leader of the party before, during the constitutional suspension and UK interim administration of the TCI from 2009 to 2012.

In a six-minute video presentation shared on social media , Parnell gently speaks about a 15-year career where he has faced off with a giant-sized government administration; led the PDM through a global recession; speaks to his service in parliament over the past four years and gives thanks to Sharlene Robinson, “for leading us at this time…”.

“It goes without saying, that I believe I have a fresh perspective in which to offer, a fresh perspective on the challenges we face which if accepted will aide our party in challenging successfully the next general election and winning and I do believe that going forward with the challenges we face, that I am better able to lead this party as well as lead the country through very difficult, difficult times ahead,” said Parnell in the statement which debuted September 10.

Parnell concludes the video by saying the pandemic requires a greater sense of urgency and action.  The national chairman told viewers, he can offer that.

Other media comments have strangely uncharacteristic of the feisty, charismatic politician which usually is Doug Parnell.  A conspicuous fact given the gravity of the maneuver which happens within striking distance of a general election being called and while his incumbent challenger holds the country’s top elected office.

Even the Premier seems atypically mellow in speaking to the TCI Sun Newspaper; her usual sizzle is missing in her statements to the newspaper.  Instead the Premier offers that she was respectfully informed of the challenge, welcomed it as a sign that democracy is alive within the PDM and essentially expressed the contest is not a big deal.

There has been no response to a string of questions directed at the national chairman by Magnetic Media about how the convention will unravel.

COVID-19 protocols have capped gatherings to between 10 and 25 people; require physical distancing measures are applied and restrict evening activity in Providenciales to within an 8pm public health curfew.

How will the nominations be made?  How will the votes be cast and tallied? How will the delegates who represent 10 districts from different islands in the chain participate when inter-island travel is restricted? And if there is a virtual session forced by the coronavirus stringencies; will it meet the thresholds of fairness, transparency and constitutionality?

We spoke to some delegates who informed that the convention was a surprise and that many party branches are caught off guard and are therefore disorganized.

The PDM is holding the weekend conclave under the theme:  “Victory Ahead.”