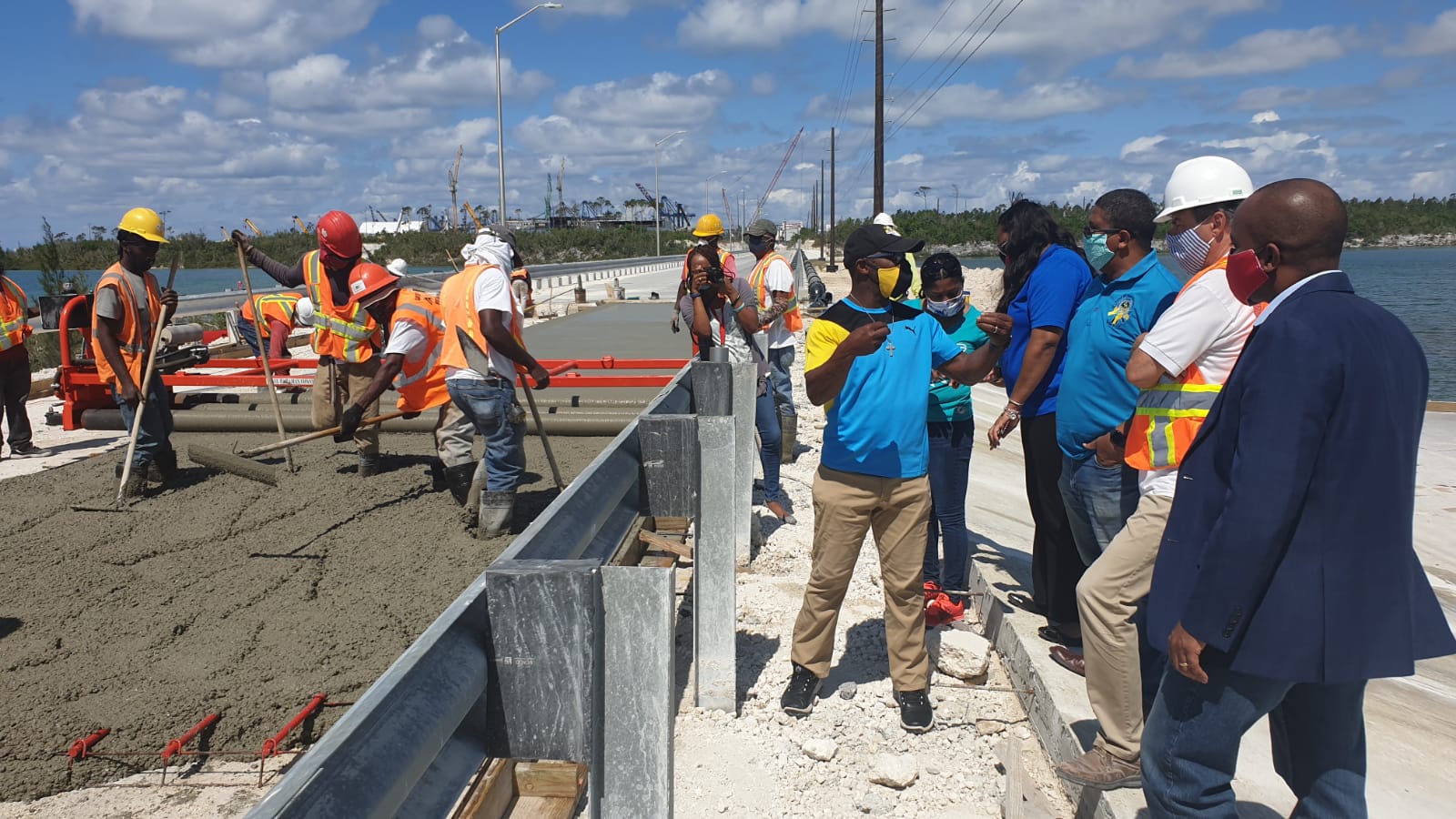 WATCHING WORK – Minister of State for Disaster Preparedness, Management and Reconstruction, Iram Lewis (left) explains to Deputy Prime Minister, K. Peter Turnquest, and Minister of State for Grand Bahama, Senator Kwasi Thompson some of the work being carried out by employees of ABC Construction Company during repair of the Fishing Hole Bridge on Wednesday, May 6, 2020. (BIS Photo/Lisa Davis)

#Freeport, Grand Bahama, The Bahamas – May 7, 2020 — Final repairs to the Fishing Hole Road Bridge are expected to be completed before or at least by the beginning of the hurricane season, which begins in June, according to Minister of State for Disaster Preparedness, Management and Reconstruction, the Hon. Iram Lewis.

Minister Lewis, along with Deputy Prime Minister and Minister of Finance the Hon. K. Peter Turnquest, Minister of State for Grand Bahama Senator the Hon. Kwasi Thompson, and Member of Parliament for West Grand Bahama and Bimini, Mrs. Pakesia Parker-Edgecombe toured the Fishing Hole Road Bridge on Wednesday morning (May 6, 2020) as workers were busy carrying out repairs.

Minister Lewis noted that the repairs will make the bridge much stronger than it was when it was originally constructed: “We promised to build back better and stronger and so we are witnessing progress to repairs of the bridge.  The concrete replaces the asphalt that was there pre-Dorian. What we have now is stronger and more resilient.”

Deputy Prime Minister, Peter Turnquest noted that the bridge will be necessary to protecting lives and providing access for emergency services in and out of West Grand Bahama. He said the causeway helps to spur on local commerce on the island of Grand Bahama: “Particularly now that we are in a situation where we are going to have to depend more on our domestic economy than we do on our visitors — to have this access between West Grand Bahama and Freeport has become critical.”

“While progress has been slower than what we would want, it only goes to show that these things are technical issues and we want to make sure that we do it right and spend the money to get the best value for the Bahamian people,” said Minister Turnquest.  “So, we appreciate the patience and we will continue to improve on our infrastructure and deliver the services that the Grand Bahamian people deserve and need.”

Minister Turnquest thanked the Contractors from ABC Construction for their commitment to first completing the project, and then making the necessary repairs.

The new bridge has been purposed to bring an end to that age-old problem: “The fact that this bridge is being built better and stronger attests to our resiliency in moving forward with regards to being prepared in hurricanes,” said Mrs. Edgecombe.

She added, “To know that the only connecting point out of West Grand Bahama into the eastern part of Grand Bahama is going to be completed is absolutely good news for us, and we can’t wait for it to be finished.”