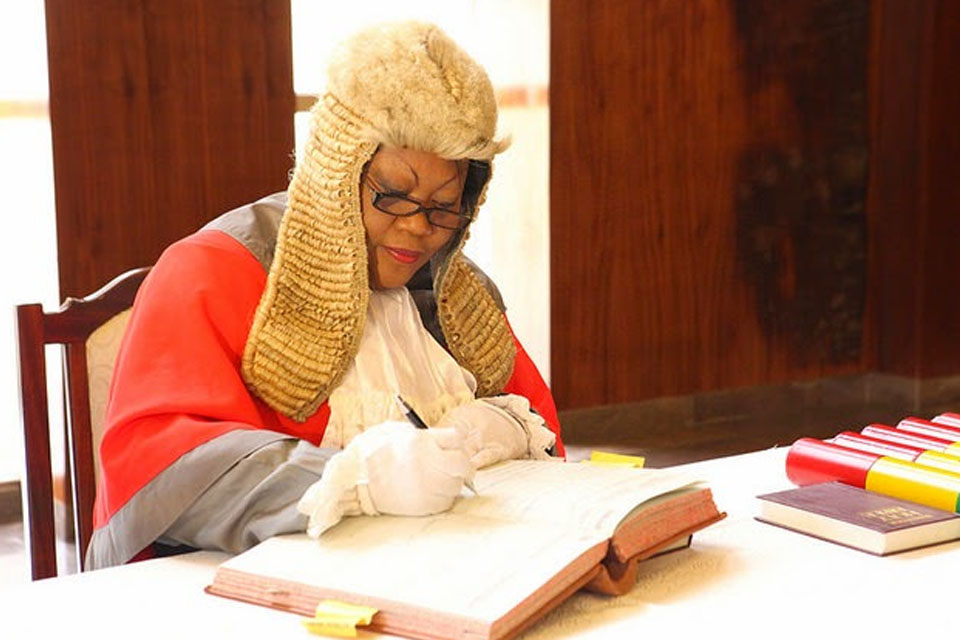 Mabel Agyemang, New Chief Justice of the Turks and Caicos hails from Ghana

#GrandTurk, Turks and Caicos Islands — Thursday, 20th February 2020  Ensuring there is a vibrant Judiciary that not only dispenses justice, but provides balance to the Executive, is an essential element of democratic law-abiding society.

In keeping the public informed, let me start by saying something about the process as well as the result.

In making judicial decisions the Governor is not alone. He has outstanding counsel. He makes his decision based on the advice of the Judicial Service Commission; a group of three very senior and experienced Judges.

It is the JSC who sift the applicants and then choose which applicants they will interview. It is the JSC, and not the Governor, who conducts the interviews. Using the role of Chief Justice as an example the role was advertised internationally, not just regionally, and the JSC received a very strong field of applications.

From this field the JSC chose to interview seven candidates. They don’t ask the Governor’s views on individual candidates either before the sift or before the interview. They did consult with the President of the local Bar and they did canvass individuals to see if there was interest from members of the senior Bar in TCI; no local candidates chose to put themselves forward this time for the role of Chief Justice.

The JSC also canvassed the Governor’s view, not in terms of named candidates but any special requirements the Governor might identify.  I said that beyond being an excellent Jurist, and having an independent spirit, TCI needed a Chief Justice with the energy and experience of taking through change in the Justice Sector.

The blue print for that change has been crafted by our outgoing Chief Justice with significant support from those in the wider criminal justice stakeholder group.  As a result, all those interviewed were provided with a copy of the Strategy and interviews included questions about approach and implementation.

Justice Agyemang has worked as a Superior Court Judge in three Commonwealth Jurisdictions. At present she is a Justice of the Court of Appeal in Ghana.

She is a product of the University of Ghana and the Ghana School of Law, she was in private legal practice from 1987 to 1991 when she joined the Judiciary of Ghana. In 2002, she was appointed a High Court Judge.

It is worth saying something about her departure from her role in the Gambia. This is a badge of significant honour. She stood up to an autocrat – one of Africa’s most notorious strongmen – Yahya Jammeh – whose 22-year rule only ended in 2017.  Through integrity and courage, she attempted to protect the Judiciary from an overarching executive.

It’s probably best I give, as but one example, evidence provided by the Bar Council in the Gambia.

Justice Agyemang was elevated to the position of Chief Justice, a very difficult position to hold in an autocratic regime. The Bar welcomed her appointment as we strongly believed in her independence and capacity to steer the justice system. During her tenure as Chief Justice, she had firm control of the judiciary, as well as the support of the judges, the Bar Association and the judicial staff. She instilled a culture of discipline and professionalism in the Judiciary. The attitude to work by judicial officers dramatically changed, and they became more professional and effective. Punctuality was expected of everyone and she led by example. She introduced reforms to ensure access to justice to litigants and to minimize the unnecessary delays in the dispensation of justice. She initiated the amendment of the Rules of Court to ensure expeditious determination of cases. She was a driver of innovation and reform, introducing ICT solutions to Judges for case law research amongst other things.

It was regrettable that despite her excellent and successful tenure, the President at the time unlawfully terminated her services to the dismay and disappointment of the entire legal fraternity. At that period of the time, the then autocratic President was doing everything possible to control the Judiciary. Indeed, the departure of Justice Mabel Agyemang was sorely felt, as she left an indelible mark in our judicial sector.

The new Chief Justice herself asked the JSC that she be employed on a three-year contract and that was the JSC’s recommendation to me, which I have accepted.

The Islands new Puisne Judge will be Ms Tanya Lobban-Jackson.

Ms Tanya Lobban-Jackson has been the extremely effective Chief Magistrate of the Turks and Caicos Islands. The Magistrates Courts, where the vast majority of cases are heard have had conviction rates of 80% that mirror the UK’s and they have a reputation for efficiency.

Ms Lobban-Jackson was appointed to the post of Chief Magistrate of the Turks and Caicos Islands in August of 2016. In that post she was ex officio Coroner and Mutual Legal Assistance Treaty Authority.

Prior to being appointed to the Magistracy, Ms. Lobban-Jackson was a Senior Prosecutor in Jamaica and Senior Crown Counsel in the Cayman Islands gaining eighteen years’ experience in advocacy in the Magistrate’s Court, Supreme Court and Court of Appeal.

Trained in the areas of Child Safeguarding, Human Trafficking, Money Laundering, and Case Management; she was first appointed to act as Puisne Judge of the Supreme Court of the Turks and Caicos Islands in December of 2018 and has done so periodically since then.

Ms Lobban-Jackson as Chief Magistrate alongside her now colleague Mr Justice Aziz, who remains with us in TCI, have both been instrumental in building a consensus in the TCI Judiciary that has resulted in the strategy that the new Chief Justice will drive forward.

The JSC’s recommendation was that Ms Lobban-Jackson should be appointed with tenure until she reach’s the age of constitutional retirement. A recommendation that I have accepted.

Mr Jolyon Hatmin will be the next Chief Magistrate of TCI.

Mr Hatmin was appointed Resident Magistrate in the Turks and Caicos Islands in 2012.  Prior to this he was the Managing Attorney of the Legal Aid Authority in his native Guyana, representing clients at the civil and criminal bar. He also worked as a Legal Advisor to the Guyana Sugar Corporation and was a public prosecutor for several years. He was first admitted to the Bar in 2000.

Mr Hatmin has built a reputation for sound judgements in his role as a Magistrate and his promotion will also allow him a seat at the senior stake-holders group that will take forward reform of the Justice sector and is to be welcomed.

Working with her we will have two excellent Judges, Justice Aziz and Justice Lobban-Jackson who have been instrumental in building the strategy that our new Chief Justice will take forward. The appointment of Mr. Hatmin as Chief Magistrate – and the elevation of Justice Lobban-Jackson -should reassure TCI that a drive for improvement, through change, will not be at the expense of continuity.