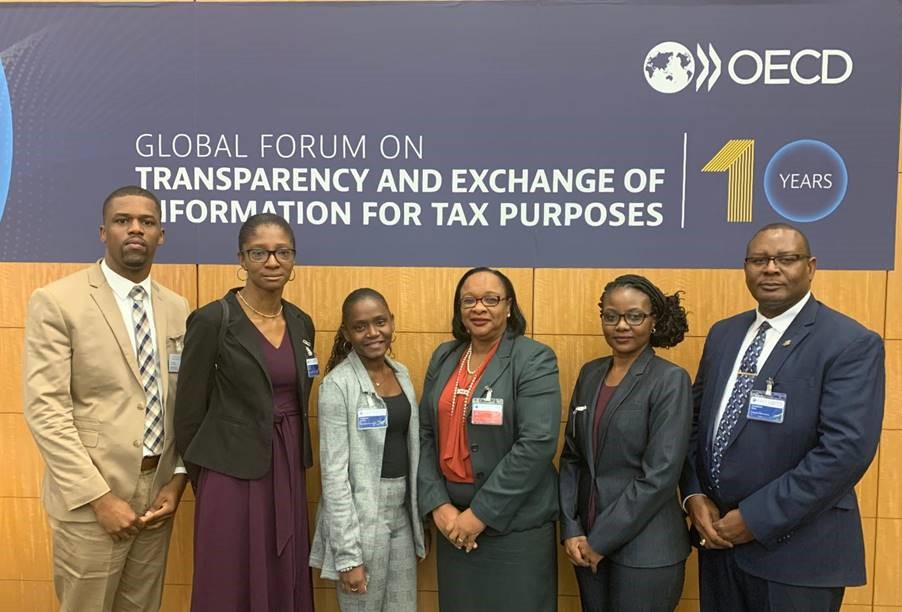 #Providenciales, 4 December, 2019 – Turks and Caicos – On November 26th and 27th 2019 the Organisation for Economic Co-operation and Development (OECD) held their 10th Anniversary Meeting of the Global Forum on Transparency and Exchange of Information for Tax Purposes (the Global Forum) in Paris, France. The Turks and Caicos Islands were in attendance at the event with a delegation of 6 led by the Premier and Minister of Finance, Investment and Trade, Hon. Sharlene Cartwright-Robinson.

The forum was specifically geared toward assessing the robust standards that have prompted a tidal shift in exchange of information for tax purposes throughout its member jurisdictions.
According to reports revealed during this meeting, almost all Global Forum members have eliminated bank secrecy for tax purposes, in an effort to reduce tax evasion and to improve tax transparency. The Turks and Caicos Islands were among those jurisdictions making a shift toward increased tax transparency.

Director of the Exchange of Information Unit within the Ministry of Finance, Henry Saunders commenting on the forum stated, “As a small developing state, TCI’s participation on an equal footing for shaping the global standard for combating tax evasion, avoidance and governance brings on a sense of inclusiveness that our values and ideals are being heard for adaption and implementation. The fight to battle aggressive tax planning is real and requires international cooperation and mutual support from participating jurisdictions with common interest.”

The Exchange of Information Unit facilitates the exchange of information with Treaty Partners internationally and domestically, to improve co-operation with internal stakeholders. The Turks and Caicos Islands Government has to-date signed several Tax Information Exchange Agreements (TIEA’s) with negotiations ongoing with a few more jurisdictions. TCI has also signed onto the Multilateral Convention on Mutual Administrative Assistance in Tax Matters adding to the list of some 60 plus jurisdictions that have already signed on to date.

Premier Robinson commenting on the globalization of tax transparency stated, “It is of paramount importance that the Turks and Caicos Islands is not labelled as a country or jurisdiction that is non-compliant with evolving tax laws. TCI has and will continue to remain compliant with global standards as it relates to exchange of information for tax purposes and improve upon our internal and external stakeholder relationships.

Turks and Caicos Islands must ensure its equal participation in the fight against illicit financial transactions and the prevention of terrorist financing by implementing and complying with the agreed international standards.

I am pleased to attend forums like these with the relevant delegates to report on, with validated data, TCI’s position as it relates to global standard compliance and to use these platforms to gain information on how we can improve and widen our knowledge and partnerships internationally.”

Included in TCI’s delegation was, Premier and Minister of Finance Investment and Trade, Permanent Secretary for the Ministry of Finance, Mrs. Athenee Basden, Senior Legislative Drafter from the Attorney General’s Chambers, Ms. Gogontle Gatang, Mr. Henry Saunders, Director for the Exchange of Information Unit, Ministry of Finance and Mr. Ronlee James, Executive Director and Lareesa Robinson, Executive Administrator within the Office of the Premier, Local Government and Community Affairs.

This Global Forum brought together more than 500 delegates from 131 member jurisdictions for renewed discussions on efforts to advance the tax transparency agenda.