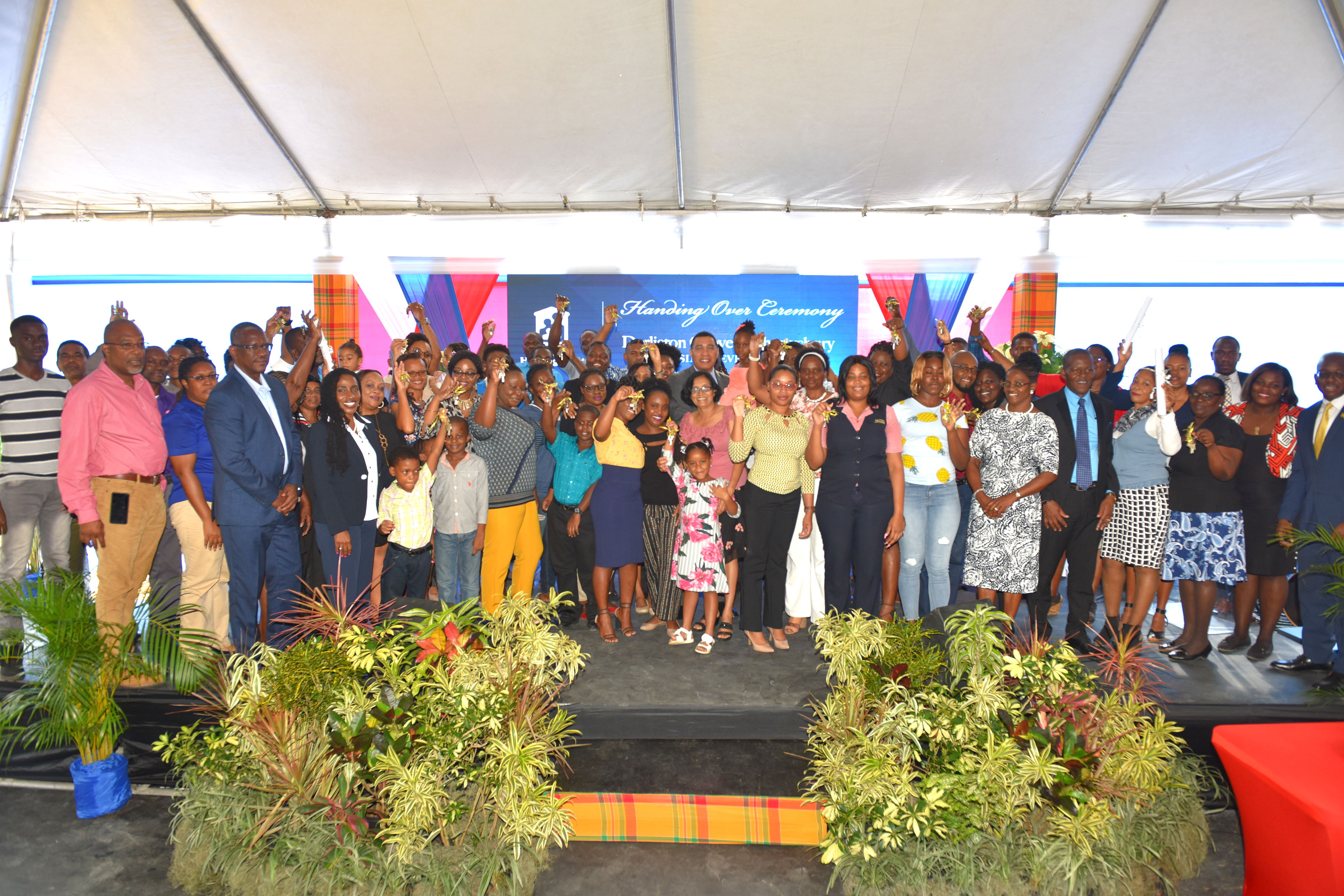 Mr. Holness presented keys to families for 29 detached units in Darliston Grove and 23 detached units in Shrewsbury.  They are the first set of beneficiaries in the island to receive housing units under the National Housing Trust (NHT) Labour and Small Materials Programme (LSMP).

In his address, the Prime Minister said the Government is committed to ensuring that every Jamaican has a fair chance of owning his or her own home and residing in a secure environment.

Mr. Holness congratulated the new homeowners and lauded the NHT on delivering the new houses. He said the agency has been following the Government’s mandate to build housing solutions for the hard-working men and women of Jamaica.

“It was in early 2017 that I broke ground at Darliston and Shrewsbury, and I told you that I would be delivering six housing developments totalling 1,493 housing solutions in the parish of Westmorland under the NHT’s four-year housing programme,” the Prime Minister said.

“So, I have to thank the Board of the NHT for doing such a wonderful job in ensuring that these projects come to fruition in short order,” he added.

Mr. Holness further stated that the NHT has been making steady progress in achieving its target of developing 23,000 housing solutions in Jamaica by 2021. He noted that this objective is being propelled through public-private partnerships that are being encouraged through various programmes.

For her part, NHT Board Director, Nesta-Claire Hunter, said the agency remains committed to empowering and improving the quality of life for all Jamaicans through homeownership.

“For us at the NHT, these houses represent more than just fulfilling targets. For us, they signify the building of a nation one block, one home and one community at a time,” she said.

New homeowner of Darliston Grove, Cosmo Grant, told JIS News that getting the keys to a new home has been an overwhelming experience for him and his family.

“We want to thank the NHT and the Government for what they have created here in Darliston, and it is my intention that we keep this scheme free from violence, and make sure it is clean all the way through,” he said.

Header: Prime Minister, the Most Hon. Andrew Holness (centre), is surrounded by new homeowners of the Darliston Grove and Shrewsbury communities in Westmoreland, at the National Housing Trust (NHT) handover ceremony, on Wednesday, December 4.

1st insert:  Savanna-la-Mar’s Mayor, Councillor Bertel Moore (right), presents keys to one of the housing solutions in Darliston Grove, Westmoreland, to grandmother, Cynthia Turner; her son, Jorrean Hill, and her grandchildren, at a National Housing Trust (NHT) handover ceremony on Wednesday, December 4. Keys to the Shrewsbury housing solutions were also handed over.

2nd insert: Prime Minister, the Most Hon. Andrew Holness, tours one of the housing solutions in Darliston Grove, Westmoreland, following a National Housing Trust (NHT) handover ceremony on Wednesday, December 4. Keys to the Shrewsbury housing solutions were also handed over.