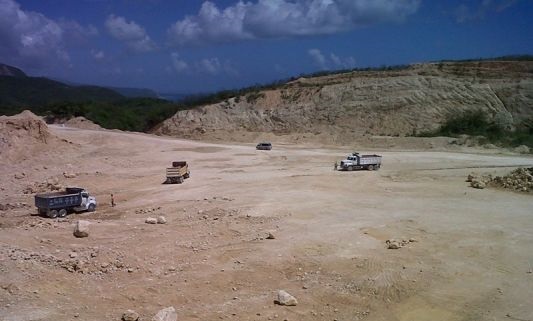 #Kingston, 31 December, 2019 – Jamaica – The Mines and Geology Division in the Ministry of Transport and Mining has embarked on a project for the development of the manufactured-sand industry.

Speaking in an interview with JIS News, Deputy Commissioner of Mines, Stacey Plummer, said that the objective is to provide a useful substitute for river sand, due to the challenges being experienced in sourcing the natural material.

“There is not a lot of material in the rivers because of the drought and other factors, so we have to find another source of construction material,” she noted.  “Exploration has been done and we are now working on getting additional investments for manufactured sand as a replacement for what we are not able to naturally produce,” she added.

Mrs. Plummer noted that some companies have already begun work in this area, with limestone and volcanic sources being utilised to produce fine aggregate.

“So far, there is Jamaica Aggregates, which is doing some crushing [of volcanic rocks]. They also purchase from other suppliers and crush the material to produce sand,” she told JIS News.

In addition, Hodges Minerals out of St. Elizabeth and Lydford Mining Company in St. Ann are crushing limestone to sand-sized particles in their operations.

Mrs. Plummer explained that the process of crushing volcanic rocks requires specialised equipment, as the material is not as soft as limestone.  In the case of limestone, she noted that the mineral comes in different consistencies, which means that the type of equipment used for crushing varies.

“In some instances, they (operators) would have to buy new equipment, so it’s the financing of the new venture that is needed,” she said.

She noted that accessing financing for the sector has been challenging “but you have some players who are maximising what they are doing”.

The Mines and Geology Division represents the geological research and development portfolio of the Ministry, and administers the mining and quarrying laws of Jamaica.  It monitors all prospecting, exploration, mining and quarrying operations and investigates, appraises and communicates information on all aspects of the geology of the island.