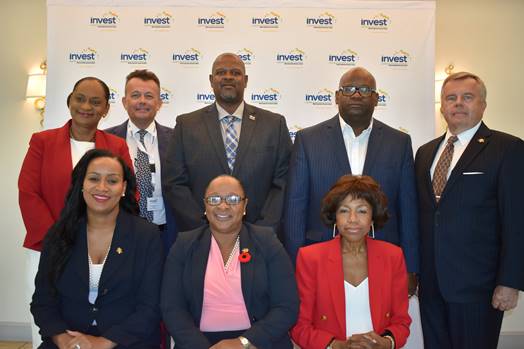 #Providenciales, November 14, 2019 – Turks and Caicos – The Premier and Minister for Finance, Investment and Trade attended Invest Turks and Caicos’ 2nd Annual Economic Conference at the Beaches Resort & Spa under the theme ‘Financial Services – Building Block to a Stronger, Diversified Economy’ on Friday, 8 November 2019.

Premier Hon. Sharlene Cartwright-Robinson brought remarks and made a presentation on ‘The Government’s Role in Supporting a successful Financial Services Industry’ outlining actions taken and commitments already made by her Government to strengthen the Financial Services Sector as a part of a strategy to diversify TCI’s economy.

The Premier and Minister of Finance commenting on the importance of such stated, “The TCI has experienced a real GDP growth rate of 2.5% in 2018 and is expected to see a 3.2% growth rate in 2019. These targets are being achieved in the wake of two major storms in 2017. Economic growth, for the most part, has been carried by the Tourism and Hospitality Sector for the past thirty (30) plus years.  Even so, we are ever mindful that a country’s economic health should never be tied to a single industry or market sector.”

As it pertains to the importance of a joint effort between the Financial Services Sector, public and Private sector entities, Premier Robinson further added, “We see the Financial Services Sector as an integral part of the country’s economic advancement, where businesses and industries continually feed off of one another, growing larger and larger as the economy grows. It is a critical component of a diversified economy; creating a sustainable cycle of overall economic activity.

This conference, is an important platform that gathered leading industry players in the Financial Services Sector, the government and its ministries, departments and agencies, as well as other service providers in the various sectors of the economy.

We are able to share, learn and collaborate toward the enhancement and advancement of the Financial Services ecosystem of the TCI, and to ensure that it is one that engenders growth.”

Premier Robinson also shared that her Government commissioned a full review of the Financial Services Sector and had received the report, completed by KPMG in June 2018. She further outlined what was already agreed but not limited to:

·       The appointment of a high level team and a Project Manager

·       To commission surveys and the capacity to facilitate data collection

·       To create a cybersecurity and data protection strategy

InvestTCI, which is the investment promotions arm of the government fall within the remit of the Minister of Finance.