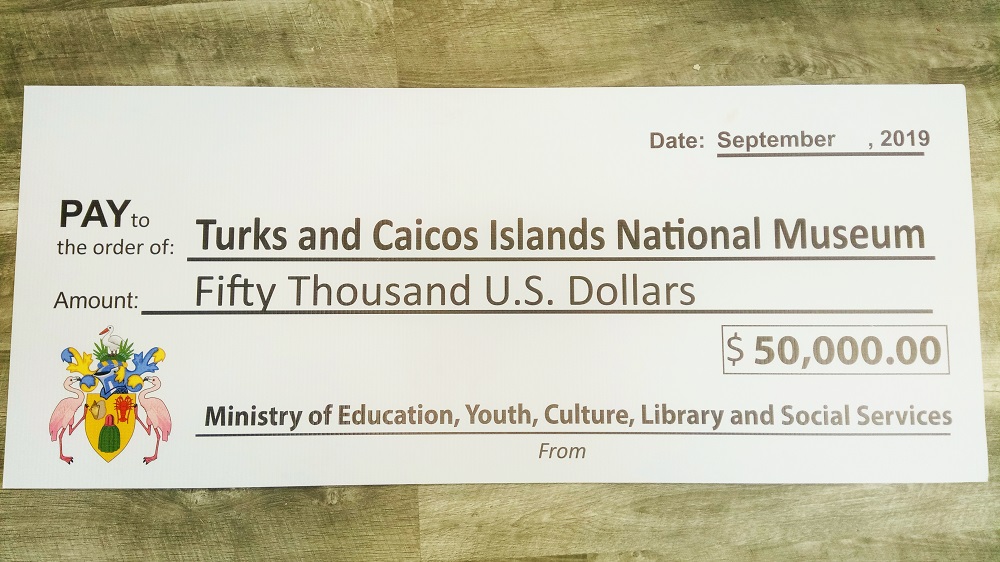 The money will be used by the museum to:

Museum Director, Dr. Michael Pateman explains that “Over the next year we will be premiering many new programs including a documentary on traditional boat building, several history books aimed at the local schools, new exhibits on Salt and Governance in the TCI and so much more.”

President of the TCNMF Seamus Day said, “On behalf of the Members and Directors, we thank the Turks and Caicos Islands government and especially the Hon. Premier for this support. Over the last several years, the Museum has refocused on incorporating the local community more into our events, programs and exhibits and the government’s support will really allow us to expand on that.”

The sponsorship check from the government was not the only donation the Museum received during heritage month.   Mr. Alton Higgs a traditional “bush doctor” from Lorimers, Middle Caicos (now resident on Grand Turk) gave the museum a basket he made from coconut leaves and stems marking the occasion of his 99th Birthday on October 17th 2019.

The TCNMF is a registered not for profit organization aimed at recording, interpreting, preserving and celebrating the history of the Turks and Caicos Islands and its people.  The TCNMF is headquartered at two-hundred-year-old Guinep House on Grand Turk and also has a facility in the Village of Grace Bay on Providenciales.