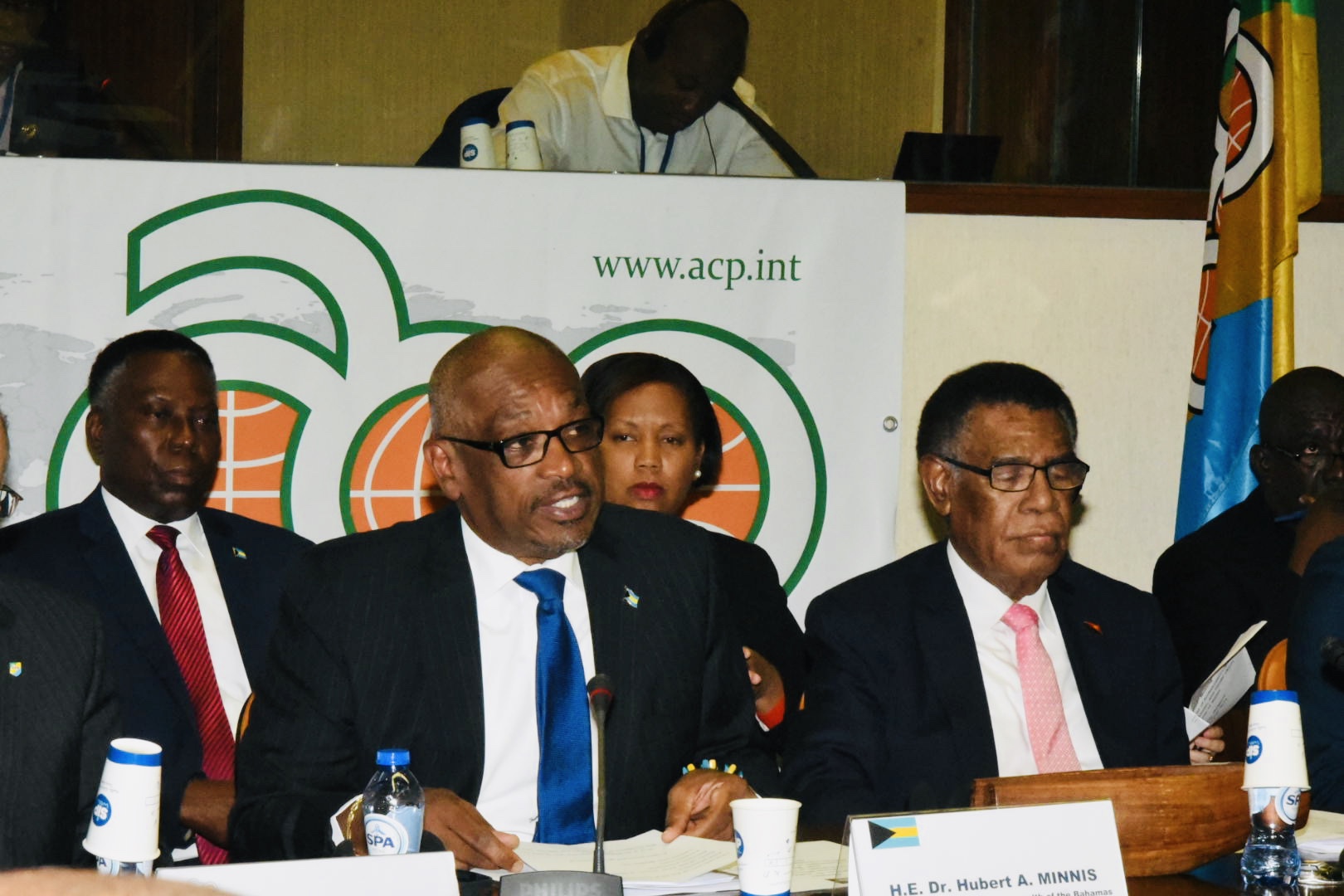 The Prime Minister made the plea while addressing the 925th Meeting of the Committee of Ambassadors of the ACP at ACP House on Thursday 14 November.

Pointing to the Category 5 Hurricane Dorian that destroyed swathes of Abaco and Grand Bahama, and the Category 3 tropical Cyclone Idai – one of the worst storms to hit the African nations of Mozambique, Zimbabwe and Malawi – Prime Minister Minnis said the impact of the global climate emergency is especially felt in the most vulnerable areas of the ACP, including the Caribbean region.

“The most recent Intergovernmental Panel on Climate Change Special Report recognizes that the choices we make now will dictate how we are affected by and respond to more storms like Hurricane Dorian and Idai,” said the Prime Minister.

Researchers have concluded that the largest and most damaging hurricanes are now three times more frequent than they were 100 years ago, and have determined that there is a correlation between the intense storms and increased global warming, said Prime Minister. Minnis.

“We are painfully aware of the warnings of the impact of climate change on all of our states, including rising sea levels and the threats to agriculture and fisheries,” said the Prime Minister.

Initial assessment by the Inter-American Development Bank and ECLAC on the effects and impact of Hurricane Dorian estimated total damages at $2.4 billion, with an additional cost estimated to be $200 million and losses of over $700 million.

The Bahamian economy was expected to grow by 2.2 percent in 2019. Following the catastrophic storm, the projected GDP growth rate is now 1.1 percent, said the Prime Minister.

Prime Minister Minnis noted the ACP’s plans to highlight the concerns of the Small Island Developing States (SIDS) at its upcoming Ninth Summit of ACP Heads of State and Government in December in Nairobi, Kenya.

The ACP is pushing to ensure that its development partners are sensitized to the particular vulnerabilities faced by SIDS, including recent developments in international trade and finance and the frequency of destructive weather events.

Prime Minister Minnis thanked the ACP Secretary-General Dr. Patrick I. Gomes and member-states of the ACP for its expressions of solidarity and support in the aftermath of Hurricane Dorian.

The Prime Minister also reiterated the commitment of The Bahamas to the ideals and objectives of the ACP since its inception in 1975.

“This commitment has recently manifested itself in the establishment of our opening of an embassy here in Belgium, as we seek to further engage and strengthen cooperation among our fellow member-states and our European Union partners,” said the Prime Minister.

In his thank you remarks, the Dean of the Committee of Ambassadors, H.E. Mr. Daniel Evina Abe’e of Cameroon, commended Prime Minister Minnis on the Bahamian government’s response to Hurricane Dorian.

Prime Minister Minnis said that through the implementation of a number of measures to bring relief and to stimulate rebuilding and restoration, including the creation of a new Ministry for Disaster Preparedness, Management and Reconstruction, The Bahamas is making significant strides in providing stability and some sense of normalcy to the lives of those affected.

“I appeal to our international partners and friends to continue to accompany us as we continue the formidable task of recovery and reconstruction and to rebuild with resilience,” said the Prime Minister.