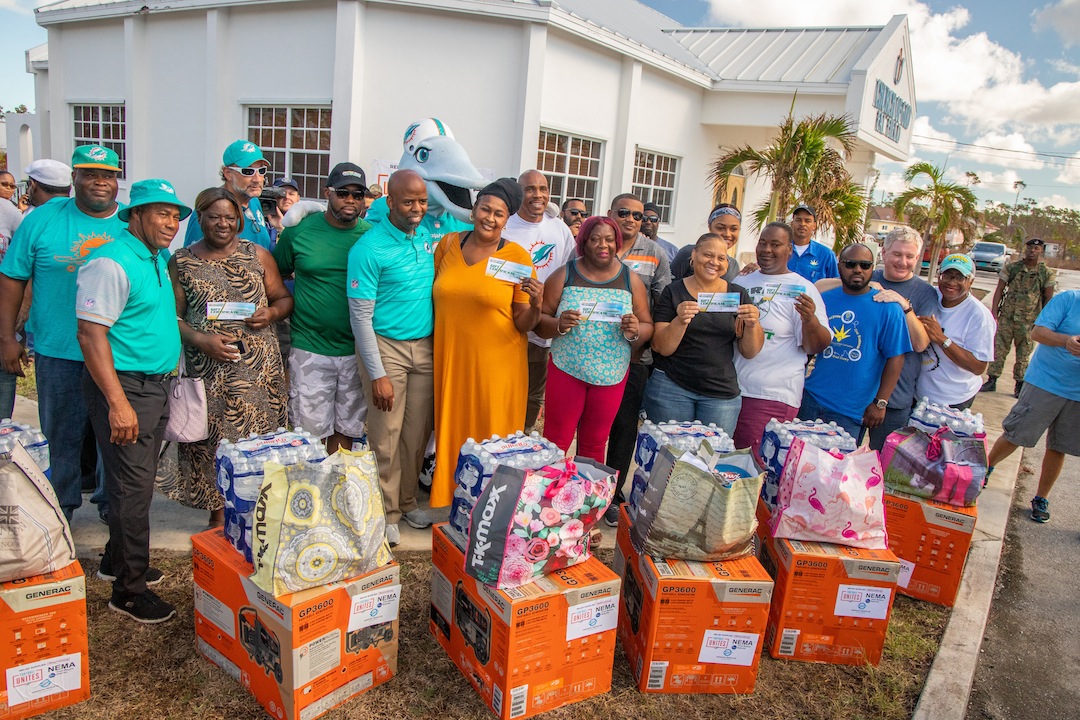 #Freeport, GB, October 8, 2019 – Bahamas – The joint effort of NEMA Grand Bahama, Mission Resolve Foundation, and Miami Dolphin’s Football Unites brought smiles and joy to many residents with the donation of generators and an afternoon of food and entertainment.

Dolphins legends Nat Moore, Mark Duper, Jim Jensen, Louis Oliver and Shawn Wooden, along with the team mascot TD, were among those visiting Grand Bahama and were welcomed to the island by Minister of State for Disaster Preparedness, Management and Reconstruction, the Hon. Iram Lewis and NEMA Grand Bahama’s coordinator, Senator the Hon. Katherine Forbes-Smith.

During a brief interview, Senator Smith said this is the third major event on a Saturday, a day when they go into the communities delivering hurricane relief items hence dubbed ‘Operation Relief Saturday’. It is a day, she continued, dedicated to inspiring young people despite all that went wrong with Category 5 Hurricane Dorian.

“Today, it’s about encouraging young people, it’s about the volunteers who work with us everyday as part of the NEMA Organization.” Senator Smith also thanked the volunteers from the Grand Bahama Power Company, one of the major sponsors of the event, as well as Rotaract.

The day started shortly before 9 am when the convoy left Grand Bahama International Airport and traveled to the YMCA where they witnessed the water purification process, as well as assisted the Rotary Club package some relief items.

From there, it was on to Heritage where some generators were donated to families without electricity. Immediately following the donation, the group split up and went door-to-door handing out hurricane relief items. While the families knew they were receiving generators, they were not only surprised but very excited about the fact that on hand to assist with the donation were members of the Miami Dolphins Alumni.

The generators were donated by companies in South Florida, and the selection was made of those residents in areas that had not yet been energized by Grand Bahama Power Company.

Just before noon, the group arrived at the basketball court where the Falcons Boys Club meets, and encountered hundreds already in place, anxious to meet those from the Miami Dolphins. Yes, they were donned in Miami Dolphin paraphernalia and were happy for whatever photo opportunities they could get. They mixed, mingled, played basketball and ate hotdogs, hamburgers, BBQ ribs and chicken. At the end of the event, event partner Grand Bahama Power Company distributed lanterns, tarps, water and ice and also sponsored the food and drinks.

Nat Moore, who led the delegation from the Miami Dolphins, addressed the young people and said what has happened presents an opportunity to get up, stand up and do better. “That’s what it’s all about.  It’s easy falling down, it’s about getting up, working hard and getting better.”

From the Boys Club, it was off to Regency Park where five more generators were donated to families without electricity, and the visitors walked the streets distributing care packages.

Even though it was a day of giving in those areas, all NEMA distribution centers were open to the public.

Photo Caption: Members of the Miami Dolphins alumni are pictured upon arrival in Grand Bahama, taking group photo with residents of the Heritage community, and handing out relief supplies Saturday, October 5, 2019 in Freeport, Grand Bahama. The Miami Dolphins teamed up with Mission Resolve Foundation and NEMA (National Emergency Management Agency) in distributing food, water, and generators to needy residents in the Freeport area in the aftermath of Category 5 Hurricane Dorian.