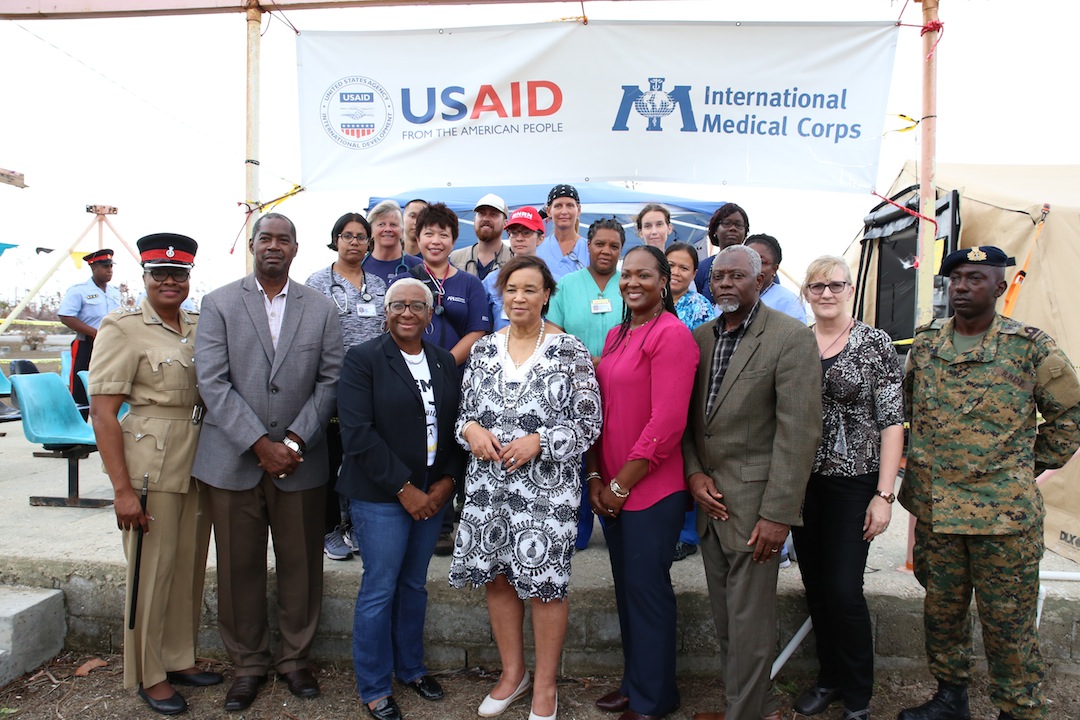 #Freeport, GB, October 11, 2019 – Bahamas – Secretary General of the Commonwealth of Nations, the Rt. Hon. Patricia Scotland, QC says having the opportunity to see first-hand the devastation caused by Hurricane Dorian in both Abaco and Grand Bahama will assist her in accurately describing to the international community the enormity of the devastation in The Bahamas.

After visiting the island of Abaco, October 6, 2019, which was decimated by Hurricane Dorian, the Secretary General and her delegation flew to Grand Bahama on Tuesday, October 8, 2019, where they were able to see the devastation of Hurricane Dorian on the nation’s Second City.

During a drive into East End, where major damage was visible, the Secretary General noted significant destruction to the homes and to the overall landscape of the island.

“What is so heart-wrenching is that when you look through the devastated homes, you get a sense that they were once people’s beautiful homes,” the Secretary General said during a stop in High Rock. “It’s sad to see people’s possessions piled up high outside in the front of their homes.

“We have to work out how to respond better to these types of hurricanes and climatic incidences. We have to know how to prepare globally and not just as individual countries. None of us knows who will be next. We just know that there will be a next time; and it’s no longer if, it’s simply a matter of when.

“It has been tragically Bahamas’ turn this time. In 2015 it was Dominica, in 2017, it was Antigua, Barbuda, Dominica and The Bahamas – we were all affected.”

Secretary General Scotland noted that all over the world, climate change is beginning to take its toll. She pointed to heightened sea levels, drought in places like Namibia and other parts of Africa, flooding in India, cyclones in the Pacific and hurricanes in the Caribbean.

Ms. Scotland said these natural disasters were once identified by seasons, but they are no longer subjected to any specific times.

“We do not know when they start, and we are terrified about when they will end,” she added.

“This catastrophe is not something that’s a one-time event, this is the future of the world we live in. These kinds of storms are happening more and more frequently in our world and the damages are getting greater because these hurricanes are getting bigger and bigger.  Some people say that Dorian should not have been called a Category 5 storm, but a Category 10 because of the size, the damage and the enormity of the damage it has caused.”

Ms. Scotland noted that the devastation on Abaco and Grand Bahama caused by Hurricane Dorian has to be seen to be believed.

She said that together the Commonwealth nations can come up with certain methods that will make the situations better. She said there have been discussions on how to rebuild Grand Bahama and Abaco, but not in the same old way.

“We have to look at how to rebuild for resilience, how do we use all of the knowledge that we have now about regenerative development so that we can make it less likely that if a Category 5 storm hits again, we will see this level of devastation?

“It’s going to take all of us, because none of us on our own can do this.  But I believe together we can. In the Commonwealth we have 53 countries, that’s 2.4 billion people and sixty percent of those people are under the age of 30.

“People look at devastation like this and say this is terrible, it’s game over, but we’re saying no way, this is game on and we’ve got a good team.”

Header: During a tour of East Grand Bahama, the Secretary General for the Commonwealth of Nations, the Rt. Hon., Patricia Scotland (centre) and her delegation stopped at the temporary hospital set up by International Medical Corps in High Rock.  Accompanying the Secretary General were President of the Senate, Katherine Forbes-Smith (third from left), Captain Stephen Russell of the National Emergency Management Agency — NEMA (second from left); East End Administrator Bowe (4th from right); Captain Godfrey G. Rolle, Consultant at the Ministry of Foreign Affairs (third from right) and Deborah Jamieson, Director of Head Office and Aide to the Secretary General (second from right)

Insert: Secretary General for the Commonwealth of Nations, the Rt. Hon. Patricia Scotland, QC (right); President of the Senate, Senator Katherine Forbes-Smith and East End Administrator Bowleg listen as doctors from the International Medical Corps talk about some of the work they have been doing in High Rock following devastation caused by Hurricane Dorian that ripped through Grand Bahama, during a tour in East End on Tuesday, October 8, 2019. International Medical Corps was one of the Non-Government Organizations that came into Grand Bahama to assist residents following the storm.