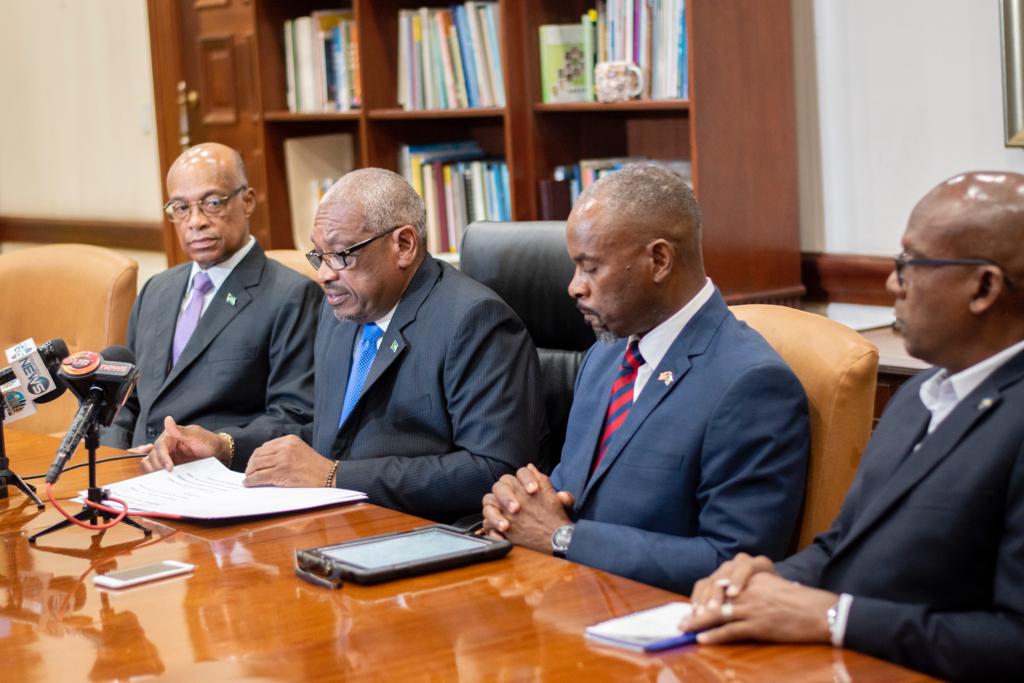 #Nassau, October 21, 2019 – Bahamas – The central Government is deploying hundreds of government personnel from every ministry and major agency on the ground to coordinate and to help with Hurricane recovery and reconstruction, Prime Minister the Most Hon. Dr. Hubert Minnis told reporters today at a press conference.

To help accommodate the largest deployment of government workers in the history of the country in the aftermath of a natural disaster, RV trailers have been brought in to house critical personnel on the island of Abaco.

“We are ensuring security on the ground. Those who break the law will be prosecuted. Law and order are essential for rebuilding,” said Prime Minister Minnis. “We have had to reestablish the workings and the instruments of government on the ground.”

The Royal Bahamas Defence Force has established a container city, which is serving as its operations base, and as a part of the command and control structure needed to ensure law and order.

The base is located in Dundas Town and prepares 700 meals per day for Defence and Police Officers, and other government workers. They have set up a RO plant capable of producing 1,000 gallons of water. There is also a clinic and living quarters.

The Prime Minister, along with Minister of Foreign Affairs and North Abaco MP, the Hon. Darren Henfield, and Minister of State for the Ministry of Disaster Preparedness, Management and Reconstruction, the Hon. Iram Lewis, carried out assessments on mainland Abaco and Elbow and Man-O-War Cay.

The team also visited the site for the Family Relief Centre, which is located on Government land. The land has been cleared and infrastructure materials are arriving. Trailers for the workers who will construct the domes are at the site.

The infrastructure from the Family Relief Centre will remain in place to accommodate permanent housing on the same site, which is near Spring City. The temporary domes will be removed as individuals and families move to permanent housing.

The Prime Minister said that because Marsh Harbour and the adjacent areas are larger and contained more public infrastructure than the Abaco Cays, Marsh Harbour is obviously going to require considerably more reconstruction.

“Even as we rebuild Marsh Harbour and the adjacent communities, we are working to rebuild the Cays as quickly as possible,” said Prime Minister Minnis.

The Prime Minister said that a constructive meeting with members of the Abaco Chamber of Commerce revealed that the local business community is very eager to work with the Government to rebuild devastated areas.

Beginning this week, the residents of Abaco and Grand Bahama will be able to utilize in their rebuilding efforts the Government’s One-Stop Shop facility, which includes the Ministry of Works, the Department of Environmental Health, Customs, Local Government, the National Insurance Board, Department of Inland Revenue and the Small Business Development Centre.

The Prime Minister noted that resorts in Southern Abaco are open and able to receive guests.

“There is progress on the ground across Abaco,” said Prime Minister Minnis. “But there is still a long road to recovery and to reconstruction. The rebuilding of Abaco is going to take a long time. But the rebuilding has begun.”

Photo Caption: Prime Minister Minnis provided an update on recovery and reconstruction in Abaco at a press conference this morning at the Office of the Prime Minister.