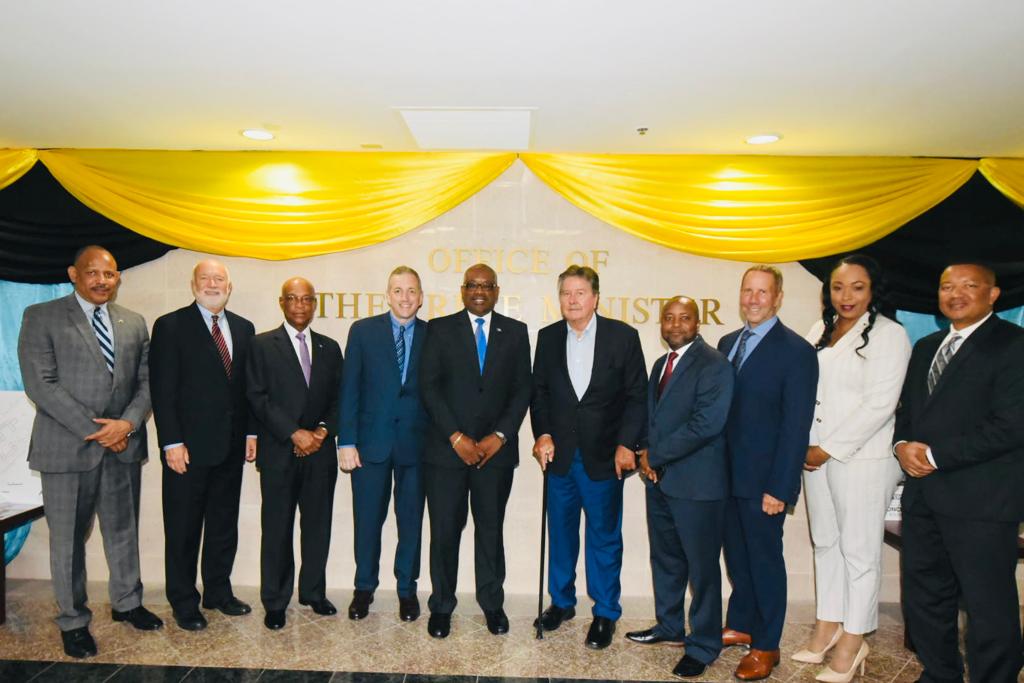 #Freeport, GB, October 23, 2019 – Bahamas – A $64 million Heads of Agreement was signed on Monday, October 21, between the Government of The Bahamas and Western Atlantic University School of Medicine.

Prime Minister, the Most Hon. Dr. Hubert Minnis, was accompanied to Freeport by Minister of Education, the Hon. Jeffrey Lloyd and Minister of Health, the Hon. Dr. Duane Sands.  Also present was Minister of State in the Office of the Prime Minister, Senator the Hon. J. Kwasi Thompson; Ian Rolle, president of the Grand Bahama Port Authority; senior government officials as well as Peter Goetz, CEO and Managing Member of Western Atlantic University and staff members from Western Atlantic.

Prime Minister Minnis said that over the past two months, since the devastation of Hurricane Dorian in Abaco and Grand Bahama, the government and international partners have focused on rebuilding the communities and lives of those affected. “Today’s signing is an important part of the recovery effort.  In order to rebuild Grand Bahama and Abaco, we must spur economic development and job-creation.

“This development represents a significant investment in Grand Bahama, the country’s second largest economy. It is estimated that in the University’s first 10 years of operation, student and faculty spending on housing, food, entertainment, goods and on-island transportation, will provide a combined $200 million in revenue for Grand Bahama. At the peak of construction, 150 jobs will be created. During the full operation of the campus, approximately 200 permanent jobs will be created for Bahamians.”

The development is expected to inject hundreds of millions of dollars into the Grand Bahama community while also providing direct and indirect opportunities for residents.

“It will help Grand Bahama to rebuild.”

It is expected that the facility will include university-owned housing for faculty, staff and students on campus. Also expected onsite will be on-campus businesses, including a bookstore, cafeteria and a student center providing music, food, beverages, a copy center and related services. Western Atlantic intends to build its own campus on land to be leased from the Public Hospitals Authority.

The 50 acres are located south of Jack Hayward High School and will be developed in multiple phases over the next 10 years. A $64 million investment is expected during the first phase, which will involve the construction of 98,000 square feet of classrooms, offices, lab facilities, maintenance, security and related spaces.

Construction will begin on the first phase by the end of this year.

Western Atlantic, said the Prime Minister, has agreed to have an 80 percent Bahamian workforce during the construction phase. “The University is committed to recruiting qualified Bahamians for all posts, including faculty positions. Whenever possible, and when candidates present nearly identical skills, experience and qualifications, the University will adopt a “Bahamians First” mantra. The primary purpose of this mantra is if everything is equal between multiple candidates for a position, the University, at its discretion, will seek to hire Bahamians before any ex-pats applying for the same position.

The University will offer employment positions to Bahamians for all non-faculty staff that encompass a breadth of disciplines. This includes management positions and opportunities for advancement at a ratio of 80 percent Bahamian to 20 percent non-Bahamian.  Western Atlantic will also work closely with the Government and local communities to develop training and professional development programs for Bahamians who want to work during the operation of the campus.”

In order for the campus to become operational, they must obtain accreditation from the Caribbean Accreditation Authority for Education in Medicine and other Health Professions (CAAM-HP), or an equivalent body.

Five scholarships will be available to Bahamians through the Ministry of Education.

In closing, the Prime Minister added, “Grand Bahama has started to rebuild. Essential services are being restored. Clean-up efforts continue. A number of businesses and restaurants are back up and running. Cruise ships have started to call again. Port Lucaya has re-opened. Earlier this month, the Grand Lucayan started to welcome guests back to the property.  In September, the Government signed an agreement for the development of a $100 million cruise port in Freeport.

“All of Grand Bahama is now designated as a Special Economic Recovery Zone. And small businesses have started the process of receiving assistance from the Small Business Development Centre. Grand Bahama has re-opened for business. But there is still a tremendous amount of work to be done to restore and to rebuild Grand Bahama. Many Grand Bahamians lost their homes and livelihoods. Many are still mourning the loss of loved ones. We have a long road ahead of us for recovery and reconstruction. But we are making progress. Today’s signing is yet another indication of the progress we are making together.”

Minister of State in the Office of the Prime Minister, Senator the Hon. J. Kwasi Thompson noted, “The Prime Minister has made it clear that a significant part of our rebuilding process is to accelerate the progress of investments which will bring economic activity, critical mass of residents, and jobs for Bahamians.”

Through partnerships such as this, he said, Grand Bahama will not only recover, “but grow stronger than ever before.”

Photo Caption: A Heads of Agreement was signed on Monday, October 21, 2019 between the Government of The Bahamas and Western Atlantic University School of Medicine. Construction on the first phase of the $64 million project is expected to begin at the end of the year. Shown following the ceremony in the foyer of the Office of the Prime Minister in Freeport from left are: the Hon. Dr. Duane Sands, Minister of Health; Dr. Tom Shepherd, Senior Executive Policy Advisor, WAUSM; the Hon. Jeffrey Lloyd, Minister of Education; Peter Goetz, CEO and Managing Member, WAUSM; the Most Hon. Dr. Hubert Minnis, Prime Minister; Terrance Gape, attorney, Dupuch and Turnquest; Senator the Hon. J. Kwasi Thompson, Minister of State for Grand Bahama in the Office of the Prime Minister; Dr. John Flaherty, President, WAUSM; Senator Jasmin Dareus; and Ian Rolle, President, Grand Bahama Port Authority.