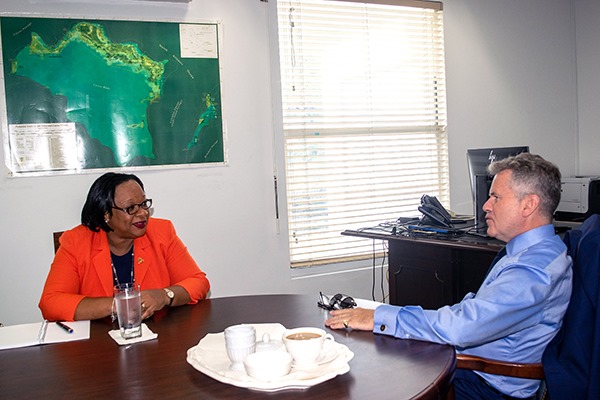 #Providenciales, September 27, 2019 – Turks and Caicos – Country leaders appear to be moving a record pace on the promise to deliver a National Security Strategy sooner, rather than later.  It is a document which new Governor Nigel Dakin has touted as top of mind and the vigor about getting the work done was recently commended by the Premier.

“Residents would have heard me speak of a NSS (National Security Strategy) for more than a year and I am pleased that we have made considerable progress today. Thanks to or new Governor who has been hands on. For the first time in the history of these islands, a comprehensive National Security Strategy is being developed to effectively confront the complex issue of crime throughout our archipelago,” said Sharlene Robinson, TCI Premier at the Crime Press Conference on September 10.

Governor Nigel Dakin has been on the job for a mere 10 weeks but has been vocal on illegal migration, people smuggling, the spike in gun crimes, the toll these serious crimes are taking on families and the TCI’s touristic reputation and what is now the highest murder rate ever for the country.

In the report of the NSC meeting, media and the general public is told: “A more in-depth discussion was had on the key components of the NSS, its underlying structures and governance, a Secretariat to deliver the strategy, the establishment of a central mechanism for managing information and multi-agency collaboration.”

The summary of the NSC meeting was dispatched from both the Governor’s Office and the Office of the Premier, and it revealed that the TCI Government is right now aiming to find any avenue the UK can offer more help to this overseas territory. The British Charge d’Affaires in Haiti, the TCI Minister of Immigration and the US Coast Guard all participated in the NSC meeting with updates.

In the case of the US Coast Guard, which is in a tripartite relationship (OpBAT) with The Bahamas and the Turks and Caicos Islands, it was noted that the update centered largely “on current and potential international agreements which underpin multi-country collaboration to tackle illicit activity, including illegal migration. UK capabilities within the region, activity carried out and initiatives going forward.”

The National Security Strategy still has some rounds to make before it is outlined to the general public, including consultation with the Joint Law Enforcement Team (JLET), Leader of the Opposition, stakeholders, Cabinet and the National Security Advisory Group.