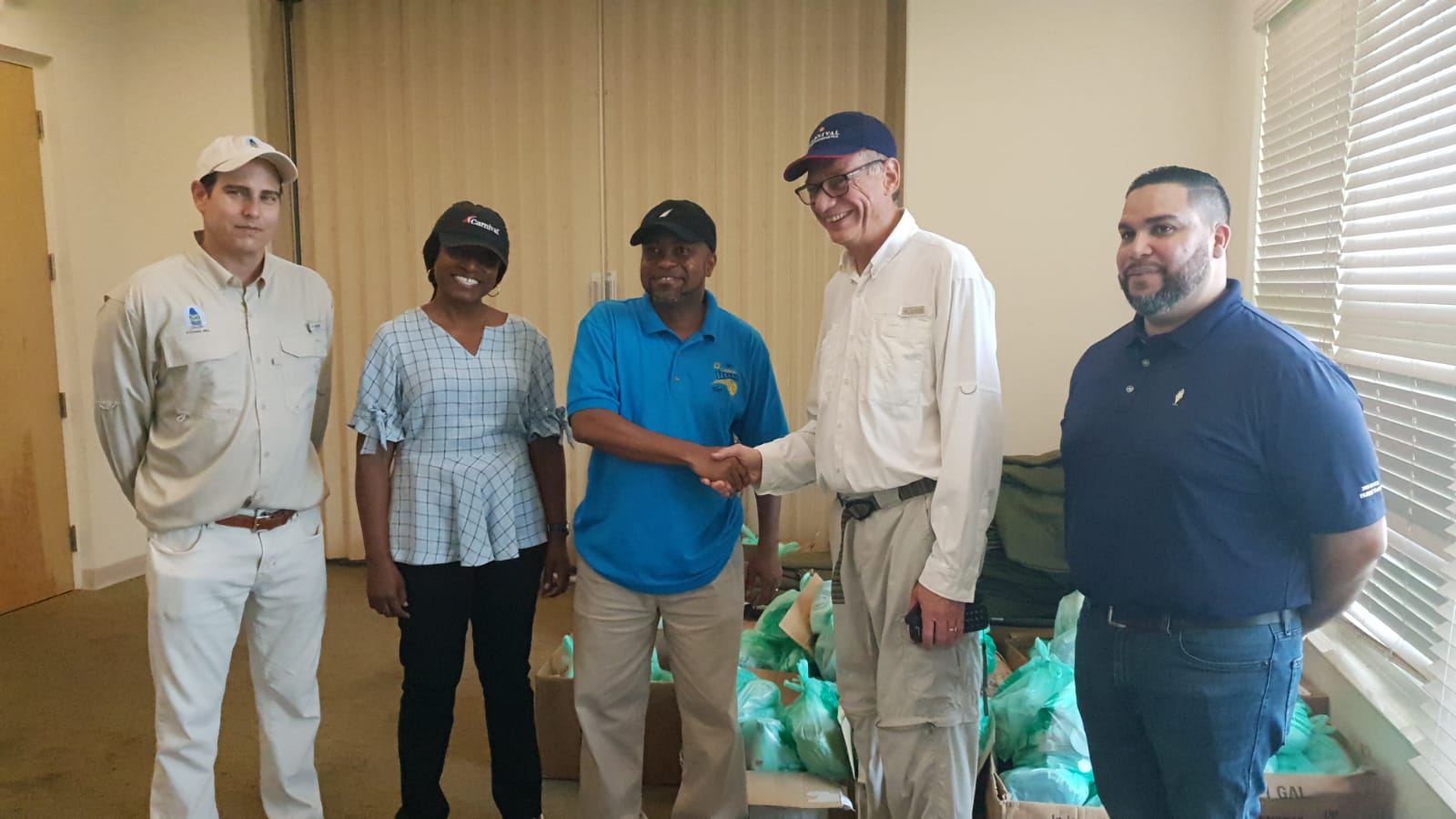 #Freeport, GB, September 9, 2019 – Bahamas – In spite of the devastation unleashed on the Northern Bahamas by Hurricane Dorian, Carnival Cruise Line is still committed to its major project on the island of Grand Bahama.

That commitment was confirmed by Giora Israel, senior vice-president of Global Port and Destination Development, during an interview with the media on Friday, September 6, 2019.

“I’m here to advise that Carnival was committed, is committed and re-committed to the Port project,” said Mr. Israel, during an interview at the Emergency Operation Center at the C.A. Smith Building.

“As soon as is practically possible, we will finalize the paper work with the government and we want to do it here in Grand Bahama, with the Prime Minister, so that we can go to work. We remain committed to this project.

“Just ten days ago, or more, the Prime Minister and Minister Thompson, in Nassau announced that an agreement has been reached and finalized for the construction of a major cruise port in Grand Bahama, which we had announced in February of this year.  I just want to reaffirm that we are still committed to that project.”

Mr. Israel, along with Marie McKenzie, vice-president, Global Ports and Caribbean Government Relations; David Candib, vice-president, Development & Operations, Global Port and Destination Development Group; and Carlos Estrada, director of Commercial Home Port Operations — made a special trip to Grand Bahama on Friday to not only get a firsthand look at the devastation that Hurricane Dorian left behind, but they also came with supplies for the residents of Grand Bahama.

Before meeting with the media, the Carnival executives held a private meeting with Deputy Prime Minister, K. Peter Turnquest and Minister of State for Grand Bahama, Senator Kwasi Thompson, to discuss the purpose of their trip to Grand Bahama.

Minister of State for Grand Bahama, Senator Kwasi Thompson said that the announcement by Mr. Israel was an important one for the island, which is still reeling from the blow that was delivered by Hurricane Dorian. He noted that while, on the surface, such an announcement may not seem directly tied to the recovery efforts presently going on in Grand Bahama, it provided a hope for the future growth of the Grand Bahamian economy.

“We are very pleased that Carnival has confirmed their commitment to the cruise port,” said Minister Thompson. “That message is essential for the relief, the recovery and the comeback. I think that message is one which all Grand Bahamians will take note of and would be pleased about.

“I want to thank Carnival Corporation and the entire team for their decision to come to Grand Bahama at this time, which confirms their partnership and commitment to Grand Bahama. They didn’t come empty-handed, but they brought with them loads of relief items, essential medical supplies and personnel. So to them we say ‘Thank you’.

“In fact, we want to say how much we appreciate the entire cruise industry. They have really come together, have been committed and they were some of the first groups of people to come in and bring relief for the whole island of Grand Bahama.”

Mr. Israel said that Carnival is also looking at the medium and long term of re-establishing Grand Bahama’s economy, which includes the re-opening the Grand Bahama Shipyard as soon as possible.   As one of the original Founders of the Shipyard over 20 years ago, Israel says he understands the importance of the industry, as it is one of the largest in the hemisphere.

“It would be good if the Shipyard could be opened quickly,” said Israel. “We (Carnival, the Government and executives of the Shipyard) are in discussions about what it would take to make that possible in a matter of days.

“Not only does the shipyard create jobs for those who work there, but it creates a lot of auxiliary contributions to the economy, from airlines, port agents, hotels and restaurants. We want to make sure that businesses are coming back, that the economy rebounds; that beyond the most urgent and immediate help, we are looking to the future.”

Minister Thompson concurred, adding that getting the shipyard up and running is critical to re-starting the economy of Grand Bahama, particularly following the negative effects of Hurricane Dorian.  “That’s obviously important for employment, it’s hugely important for visitors coming in and for the industry,” said Minister Thompson. “That move also helps to solidify Carnival’s commitment to the island of Grand Bahama.”

He noted that Carlos Estrada, who was also traveling with the team, was already making connection with officials at the Port, to work with the agent to assess whether or not they can bring in the people. They will have further talks with the taxi association, tour operators over the next several days to decide when would be the right day to bring in cruise ship passengers.

“Let’s show the people of Grand Bahama the love and they will appreciate it,” said Mr. Israel.

Minister Thompson, along with Deputy Prime Minister, the Hon. Peter Turnquest and other Parliamentary colleagues spent most of Friday in the EOC, meeting with international volunteer groups coming in and seeking ways to assist in the restoration efforts.

Minister Thompson said that the invitations to assist and the volunteers coming in from out of town has been tremendous.

“The Prime Minister himself noted that one of the best ways that a person can show his/her way of bringing relief is to continue to do business with the Bahamas,” said Minister Thompson. “So, Carnival’s commitment to continue to bring cruise ships to Grand Bahama is what will help us a lot.

“One of the things that we have to rebuild quickly is the business sector of Grand Bahama, which was hugely affected by severe flooding. So to have partners that come and say that they are fully committed and on the ground early, is very important.”

Photo Caption: Minister of State for Grand Bahama, Senator Kwasi Thompson (third from left) thanks Giora Israel, senior vice-president of Global Port and Destination Development, for Carnival’s commitment to the long-standing relationship with Grand Bahama; and more specifically, he thanked him for reaffirming Carnival’s commitment to the construction of a cruise port in Grand Bahama.  Mr. Israel and his team of executives made a special trip to Grand Bahama on Friday, September 6, 2019 to get a firsthand look at the damage to the island from Hurricane Dorian. They also brought along a large number of supplies for NEMA.  Joining Mr. Israel were (from left) David Candib, Marie McKenzie and Carlos Estrada (right).