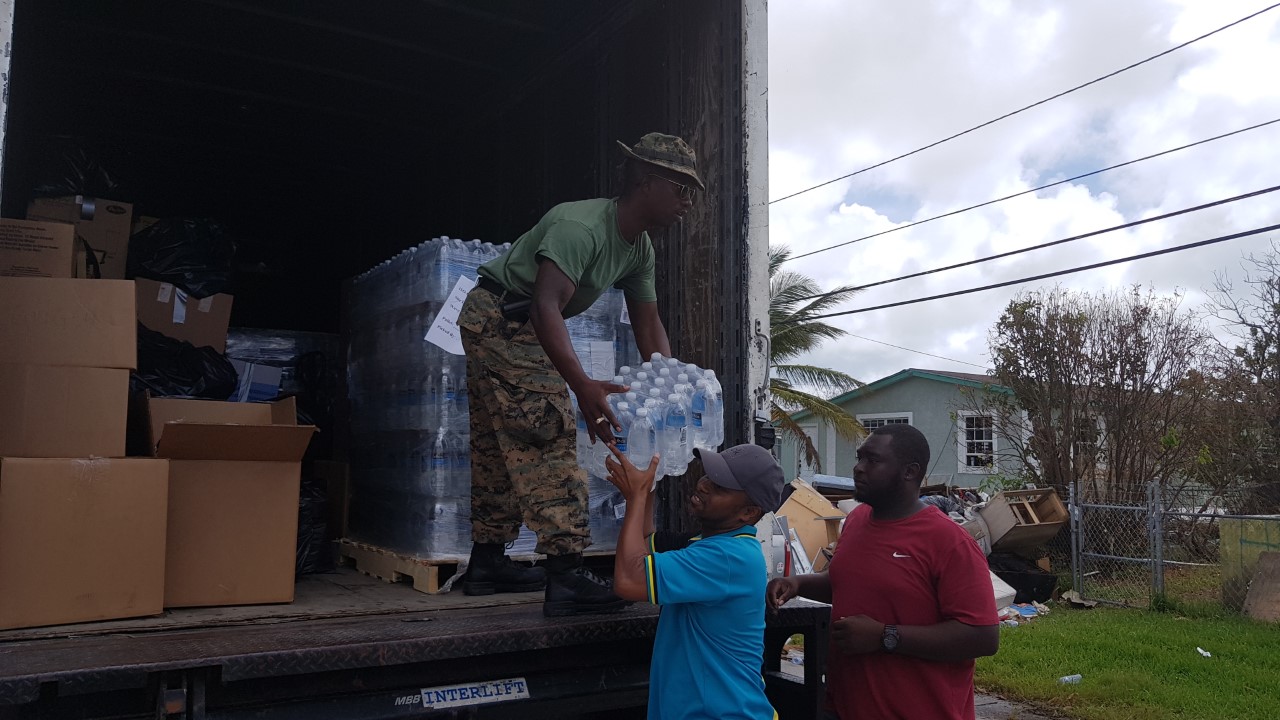 Once the packages were put together and sorted, they were loaded into large moving trucks, flatbeds and other open trucks, where they were taken into various neighborhoods throughout the island. Escorted by Defense Force officers NEMA representatives went door to door, handing out supplies to each resident in each neighborhood.

“Instead of having the supplies remain in the warehouse, we want to make sure that once they get in, they are delivered to the communities,” said Minister of State for Grand Bahama, Senator Kwasi Thompson.

“These supplies that we see in this warehouse came in last night, so it is critical for us to ensure that if they come in today that by tomorrow they go out.”

Minister Thompson noted that while NEMA has set up a number of distribution centers throughout the island, he said they are aware of the fact that a number of people lost their vehicles during the storm as a result of flooding.

NEMA Coordinator, Kay Forbes-Smith said that it was important for NEMA to go street by street and door to door and give supplies to individuals. Referring to the criticism that was floating around that the supplies were not getting to the people who needed it, Senator Smith said such assertions were untrue.

“If we have to walk it and truck it to the people, that’s what we’re going to do,” said Senator Smith. “We are going to keep doing this so that we ensure that these supplies get into the hands of the people who really need these supplies.

“We ascertain the areas and communities in Grand Bahama that were hardest hit by the hurricane and so we want to get to those people first. This is a disaster, and it takes a lot of organization and planning and that’s what we’re doing today.

“But the most important thing that we can do is get these supplies into the hands of the people who need them.”

The effort was a massive operation, with over 100 volunteers who were busy unpacking, sorting, packing and loading up trucks.  In addition to local and NEMA volunteers there was also a group of volunteers at the warehouse from K1 Direct, an NGO and a regional response team based in St. Martin whose specialty is assisting with distribution during a crisis. They are presently in Grand Bahama to assist NEMA with distributing supplies to victims hit by Hurricane Dorian.

“The packages include items for a household of four, for four days,” explained Priya Thirumur, the vice-president of K1. “It includes everything from food, to cooking supplies, to hygiene products.   From my experience, in a disaster such as this, distribution is the most challenging and logistically complicated process. One of the things that has really impressed me in coming here to The Bahamas is that NEMA and ESF7 are very proactive. Everything that comes in every day is going out to the community.  With more manpower now, we are able to get more stuff out more quickly.”

Minister Thompson thanked all of the volunteers, including K1 and other international volunteers, who are giving of their time to help do their part in trying to bring some assistance to people who have really been devastated by the Category 5 hurricane.

Asked about how he feels the relief efforts are going, Minister Thompson noted: “obviously we went through a disaster with the storm and so not everything is going to go smooth, but what is important though is that items are coming in and those items are getting to the people.”

Tammy Mitchell from NEMA said that the supplies are going to residents from East End to West End, in every community.  She said supplies are even being distributed as far as Abaco and Sweeting’s Cay and that while the intention is to get items out as quickly as possible, there is still a process that must be followed.

“We still have to check items, we still have to ensure that they are safe to go out to the community,” said Mitchell. “As we’re packaging, nothing is being left and no home is being left out. Every item that we’re taking in, we are trying to get to the homes.  We know that this island has been hit very hard, but we’re doing our best to get all of these items out.  But we have to make sure that the process is being followed.  We’re working from sun up to sun down.”

As the first truck load of care packages pulled out of the parking lot and headed into Hawksbill, Minister Thompson was there and he assisted the Defence Force officers in handing out the supplies.  As one of the hardest hit communities, the residents of Hawksbill expressed gratitude for having the supplies come to them.

Residents in Hawksbill who were busy on Saturday still removing soaked and mildewed furniture and sheet rock from their homes, and dumping them in the front of their yards, stopped their work and made their way to the truck in the streets to collect their relief supplies, thankful that the aid came to them.

Header: Minister Thompson decided to not only accompany the first load of supplies to residents in Hawksbill on Saturday, September 14, 2019, but he made his way to the back of the truck and lifted care boxes and cases of water for residents who made their way to the truck.

1st Insert: Minister of State for Grand Bahama, Senator Kwasi Thompson (left) and President of the Senate and NEMA coordinator, Kay Forbes-Smith (right), listens as Tammy Mitchell from the National Emergency Management Agency (NEMA) explains what supplies recently arrived in Grand Bahama at the Freeport Ship Services Warehouse, on Saturday, September 14, 2019.  Saturday was the launch of “Operation Relief Saturday,” where hurricane relief supplies were taken directly to the door of residents in need.

2nd Insert: Close to 100 local and international volunteers showed up at Freeport Ship Services Warehouse on Saturday, September 14, 2019 to unload, repack and load up hurricane relief supplies that were donated to the Bahamas from Carnival Cruise Lines, Royal Caribbean and other international donors.

3rd Insert: Minister of State for Grand Bahama, Senator Kwasi Thompson (on the truck, right) asks a resident of Hawksbill what he needed, during “Operation Relief Saturday.”  Minister Thompson, accompanied by Defence Force Officers and volunteers, utilized a truck and handed out supplies to residents in one of the hardest hit areas of Freeport, following the passing of Hurricane Dorian.