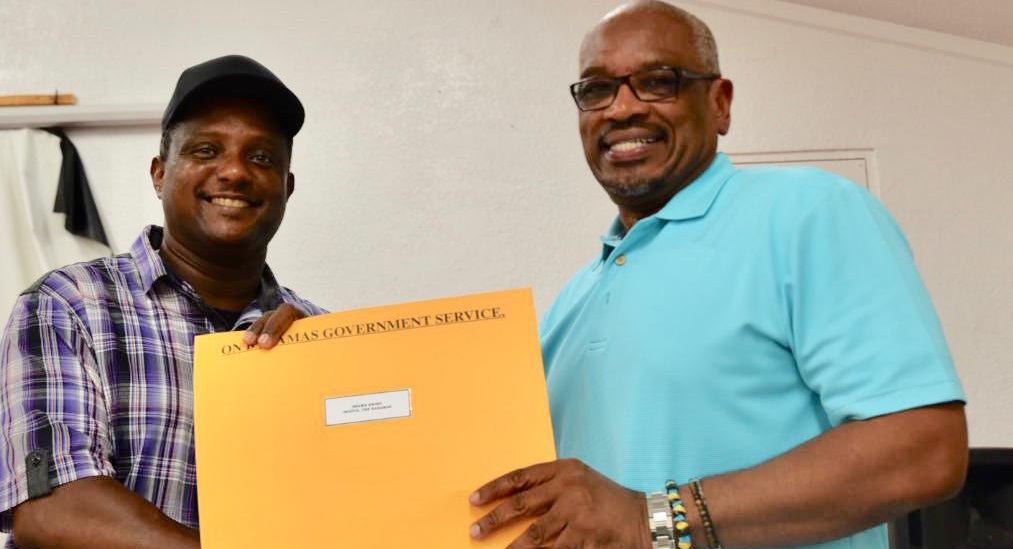 The hand over to the eight residents is a demonstration of the progress being made in the Minnis Administration’s Land Reform initiative, which is focused on ensuring that thousands more Bahamians have greater access to Crown Land.

“We promised to regularize the many Bahamians who long ago applied for and received Crown Land, but who were never given their deeds.

“I am happy that we are making progress but Land Reform is not an easy or quick fix,” Prime Minister Minnis reminded residents. “But we are systematically doing what is long overdue. We are handing over the deeds as they are finalized.”

A team from the Department of Lands and Surveys and the Office of the Prime Minister is on the island this week as part of the verification process to finalize pending applications for Crown Land.

Additional deeds for Crown Land located in Inagua are expected to be issued as part of the first phase of the Land Reform initiative, which involves processing finalized grants that have already received approval.

Inagua is among the first cluster of islands to benefit from the Land Reform initiative, which will also include Mayaguana, Crooked Island and Acklins. Eventually all major Family Islands and New Providence will be addressed.

The Prime Minister emphasized that essential to the development of the Family Islands is the grant of Crown Land to Bahamians for lodges and boutique properties; for agriculture; for second home development and for other purposes.

The Government is also promoting access to Crown Land for the development of preschools, which is especially important for the Family Islands, said Prime Minister Minnis.

The Prime Minister emphasized that the Government’s ambitious Land Reform initiative will take time and has a number of components.

As a part of its pledge to ensure access to land, the Government has eliminated the taxes on transferring or selling land to an immediate family member.

“Quite often the taxes are too much and a barrier to passing on land to an immediate family member. In removing these taxes we are making it easier and much less costly to pass on wealth from one generation to the next,” said Prime Minister Minnis.

“Access to land and the opportunity to own land is one of the greatest ways to generate and to build wealth.”

The Prime Minister encouraged Inagua residents to take advantage of the spike in visitor arrivals currently being experienced on the island and take a larger stake in the tourism industry.

According to the latest figures, tourist arrivals in Inagua have increased more than 600 per cent already for the year when compared to numbers for 2018.