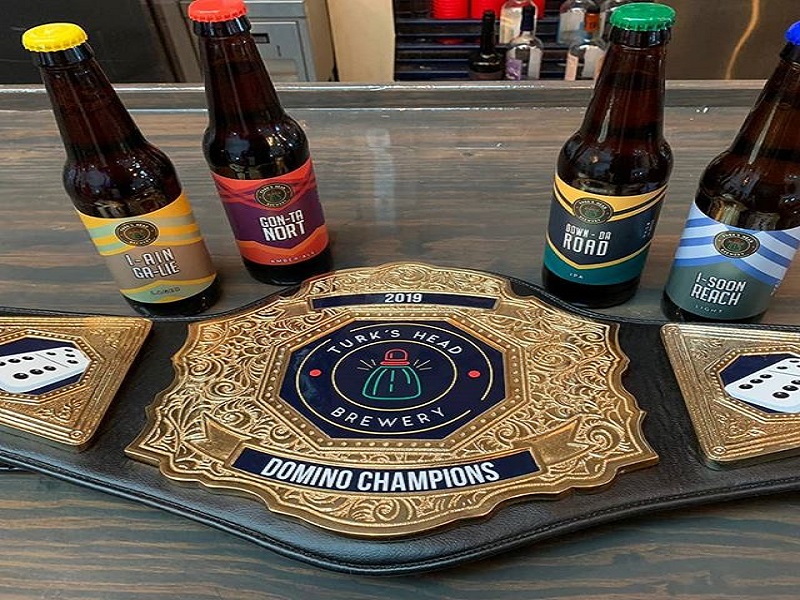 #Providenciales, June 18, 2019 – Turks and Caicos – Good vibes and energy was in the air at the first Turk’s Head Brewery Domino Tournament on Saturday June 15th. The event featured music by Prime DJ’s, food from local restaurants and of course- domino playing.

The tournament was held at the Bight Park in Providenciales. Teams of two vied to win the grand prize of $1,200 and championship belts while the runners up receiving $600. With a total of 23 teams, players took part in the best of 3 games. First team to win 2 games moved on to the next round. Game host, Georgie Penn, was in prime form as he gave match updates and hilarious commentary to the crowd and players.

At the onset of the tournament the rules and regulations were announced delivering the expectations for fair play. Once the rules were established the crackling sound of dominoes shuffling signaled the start of each round. The intense and competitive action ensued with onlookers excitingly cheering on their favorite teams and trying to predict match outcomes.

The game was umpired by domino pro and enthusiast Dorn Fulford and his team of umpires who made sure the event went smoothly settling disputes as they came along.

The crowd gathered to watch the final match up around the center championship ring. The noise level and excitement reached its peak as both teams entered to their selected song along with ring girls and the tournament championship belt.

A competitive game ensued between ‘Elite Sports Bar’ and ‘The Rummies’ as both teams tested the skills of the other. The final game was the best of 3 with the final score being 6-2 and 6-1 crowing the tournament winners Elite Sports Bar’s Jason Francis and Wesley Antenor. They walked away with $1200 cash prize and tournament belts.

The ecstatic winners proudly displayed their Championship belts and cash prize to the crowd as they celebrated their big win. Second place went to “The Rummies” Jamal Misick and Rulden Hall who walked away with $600 cash.

Tournament Organizer, Ashley Simmons said, “We are very pleased with the turn out of the crowd. The energy in the place was just amazing. We can’t wait for next year’s event and are already planning 2020’s tournament. Stay tuned for other things to come from Turk’s Head Brewery.”

Release: Outside The Box Advertisng TCI