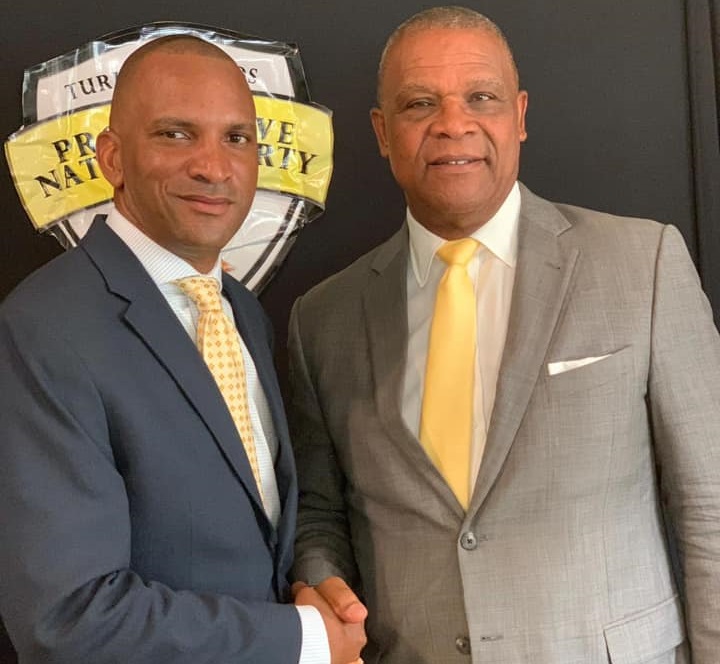 #Providenciales, June 13, 2019 – Turks and Caicos – The appointment of EJ Saunders as deputy leader of the Progressive National Party, PNP has energized some of the base of the Opposition, and the party leader says Saunders brings boldness to the team.

“The person that I have target for deputy leader of the party is someone who brings a lot of specialized skills to the party and can relate to the big bold ideas that I have for the Party to move boldly into the second half of the 21st century as a leader in technology,” said Misick during a press conference at the PNP Party headquarters on Airport Road.

Misick before making the announcement explained that the selection was a difficult one, which he expected to be disappointing for some who had expressed interest in the job.

“I am hoping that at the end of the day we can all hold our hands up and be leaders in whatever seats we sit in and that we would rally around the leadership of the party.  No one has all of the answers and no one has all of the skills, but I think together, if we build a strong team around those persons who put themselves up to run and particularly those persons who take on the daunting task of leadership to support them.”

During a press conference yesterday, Washington Misick, PNP Leader made the announcement that his second in command will be EJ, a very popular businessman and son of celebrated former chief minister, Norman Saunders.

“…someone who you already know, someone who’s connected to this Progressive National Party from the umbilical cord, who is from a political family who hopefully understands the rigors of being involved in a political party and who promised me that he – he – is committed to do a sterling job and he promised that would start in another 20 minutes…”

An eruption of applause, cheering and music welcomed EJ to his new role in frontline politics of the Turks and Caicos Islands, and specifically in the executive of the Opposition PNP.

“At 46, I make my entrance into frontline politics, later than most politicians, at least in the Turks and Caicos.  But the reason why I have started out late is because I have always said that I would not get into politics unless my country or my party needed me, particularly the country.”

Congratulatory greetings on the deputy party leader appointment were posted to the PNPs Facebook page, including from former premier, Michael Misick, who labelled the duo of Hon Washington Misick and EJ Saunders, the “Dream Team.”

In the PNP camp, the party leader has the prerogative to appoint the deputy leader and Hon Washington Misick said it was not easy making the choice for EJ.

“We have so many talented people in this party who qualify to deputize or for that matter, to lead and remember each person who put their name on the dotted line is a leader in his own right.”

TCI: ﻿Washy says 2020 is his last stand in front-line politics