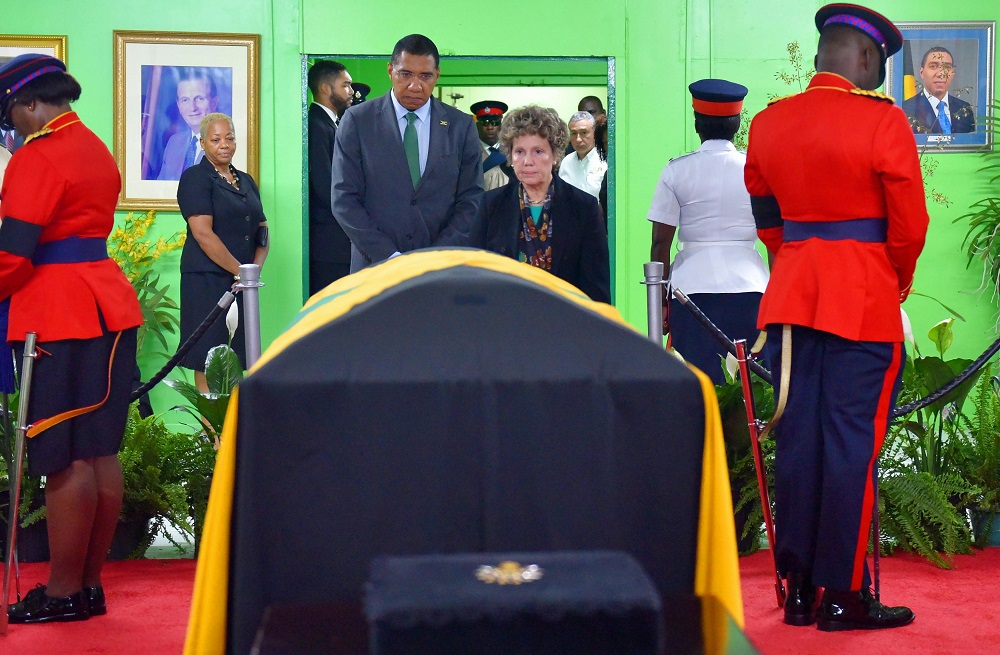 The Prime Minister arrived at the Belmont Road location at about 10:00 a.m, where he was greeted by Mr. Seaga’s widow, Carla Seaga.  He signed the condolence book before viewing the closed casket wrapped in the national flag, while soldiers stood guard.  Mr. Holness stood in silent reflection for several minutes.

Members of the public will also be able to pay their respects at the Tivoli Gardens Community Centre, where the body of the late former Prime Minister will lie-in-state from 10:00 a.m. to 1:00 p.m. on June 10, and on June 19 at the National Arena in Kingston beginning at 10:00 a.m.  The public will be allowed to file past the casket at each location.

On June 19, both Houses of Parliament will sit in a joint session, starting at 2:00 p.m. as a tribute to the former legislator.

The funeral service will be held on Sunday, June 23 at the Cathedral of the Most Holy Trinity, which has, in the past, been the venue of state funerals and memorial services for prominent public figures, including former Prime Minister Michael Manley in March 1997.

During this period of mourning, Jamaican flags are being flown at half-mast in Jamaica and overseas, leading up to his burial at the National Heroes’ Park.

Condolence books have already been opened at the Office of the Prime Minister, the Ministry of Foreign Affairs and Foreign Trade and Jamaica’s missions overseas.

Mr. Seaga died on his 89th birthday on May 28, in a hospital in Florida.