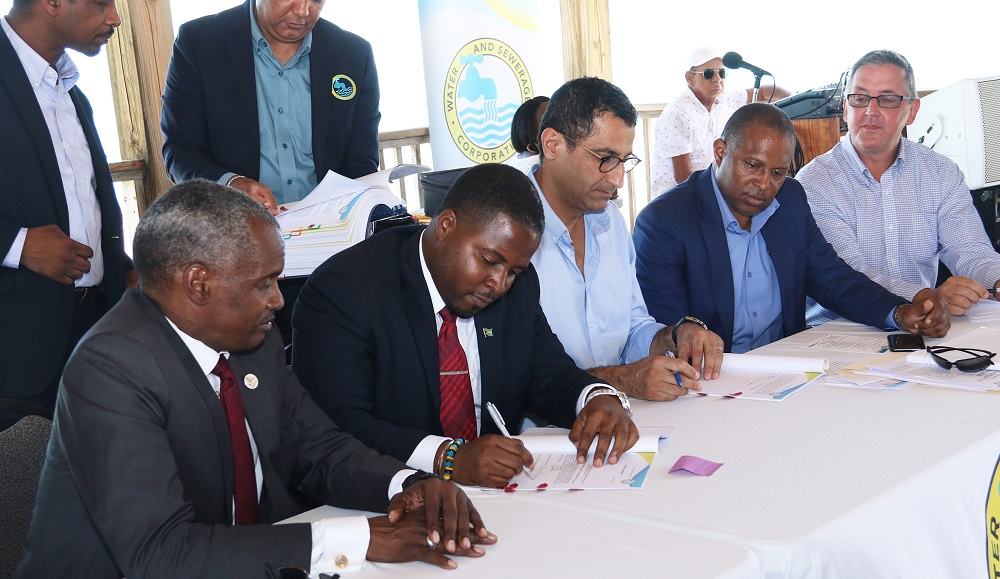 Nassau, June 28, 2019 – Bahamas – No longer will residents of Salt Pond and other settlements in Long Island have to wait for the tanker trucks to visit their homes and fill their tanks with water to take baths, clean and do laundry.

The Bahamas Government signed a $4,092,720.03 contract for phase 2 of the Long Island Water Supply Improvement Project with Bahamas Hot Mix (BHM) that will bring relief to residents and provide potable water for various settlements in Long Island, during a ceremony Wednesday, June 26, 2019.

Executive Chairman, Water and Sewerage Corporation (WSC) and MP for Long Island, Adrian Gibson said residents have waited for decades for this day and described the signing as a “historic milestone” in the development of Long Island.

A cross-section of the Long Island community witnessed the signing held at Regatta Site in Salt Pond. Among them were members of the Local Government District Council, senior Government officials, community, business and religious leaders.  Also in attendance was the Hon. Desmond Bannister, Minister of Public Works; representatives of WSC including Elwood Donaldson, General Manager; Cyprian Gibson, Assistant General Manager; and WSC board members.

In May 2018, the Bahamas Government signed a $5.3 million contract with BHM for the first phase of the Project, which included installation of 100,000 feet of pipe in north and south Long Island

Mr. Gibson said when combined, phases 1 and 2 represent perhaps the largest single capital works development project in Long Island in a very long time. He said it also represents the delivery of commitment the government has made to substantially expand access to piped potable water to the residents of Long Island.

The work is expected to be completed in 16 months and will be supplied by an expanded desalination plant in Simms.

The projects are as a result of a $28.33 million loan from the Caribbean Development Bank, which includes $13.3 million in counterpart funding from the Bahamas Government and WSC.

Phase 2 includes the following settlements, which will receive potable water for the first time: Millerton, Bunches, Deals, Scrub Hill, Simms and Doctors Creek settlements.  The work will be carried out in lots as follows:

Lot 4 includes the following settlements, which will receive potable water for the first time: Doctors Creek, Bains, Morris and Wemyss

They include the following:

“He fully understands and supports the proposition that our beloved island cannot and will not grow and prosper without modern 21st century infrastructure and he has been a proponent in this regard,” said Mr. Gibson.