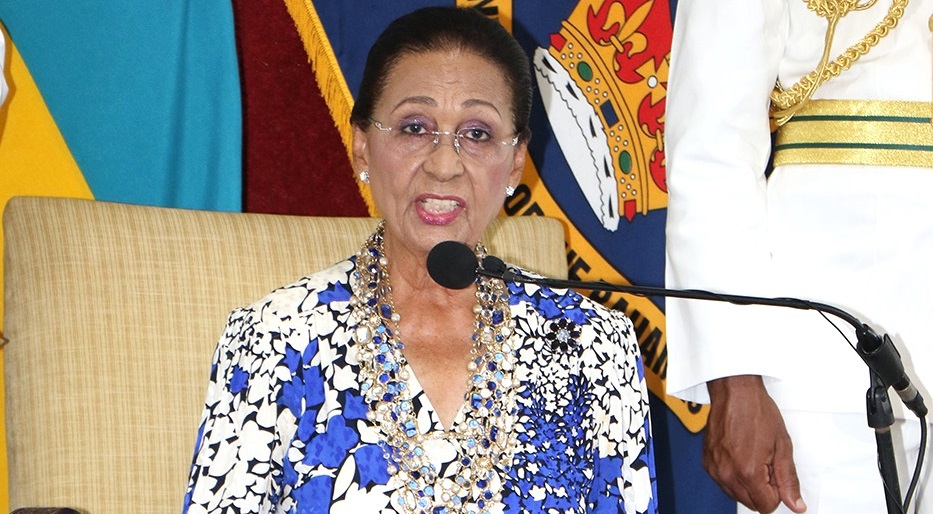 #Nassau, June 28, 2019 – Bahamas – The nation’s tenth Governor General, Her Excellency the Most Honourable Dame Marguerite Pindling, has commenced the official process of demitting office. A ceremony commemorating the event was held at Mount Fitzwilliam on the afternoon of Thursday, 27th June.

A full lineup of dignitaries was present for the occasion, including Prime Minister, the Most Hon. Dr. Hubert Minnis and Mrs. Minnis, Leader of the Opposition, the Hon. Philip Davis and Mrs. Davis, Chief Justice Brian Moree and Mrs. Moree, Cabinet Ministers, senior government officials, members of the Diplomatic Corps and Bahamian citizens from across the country.

Her Excellency thanked God for good health and for sustaining her over the years and said that she was humbled beyond measure.

“And so let me begin, as I should and as I must, by giving thanks to my Lord and Savior for making it possible for me to have this great experience of a lifetime as Governor General that draws to a close,” she said. “I am so thankful to him for sustaining me in good health throughout my time in office, and for ordering my footsteps especially in moments of doubt as to what was required of me as I sought to faithfully execute the duties of my office in a completely fair, honourable and non-partisan manner.”

She also expressed her gratitude to Queen Elizabeth II for entrusting her as her representative in The Bahamas. She said that the Queen has never forgotten The Bahamas.

She noted that she also owed a debt of gratitude to Prime Minister, the Most Hon. Hubert A. Minnis, who invited her to continue to serve as Governor General when the government changed two years ago.

She thanked her staff, especially Mr. Edris Reid and Mrs. Anita Beneby, her security team and the staff at Government House. She also took a moment to memorialize two former members of her team.

“A very special mention of the late Inspector Carlis Blatch and to Corporal Santino Maycock: You became like sons to me, holding my hand every step of the way, checking up on me throughout the day and always making sure that I was safe and secure.”

A special moment was reserved to thank her husband, the late former Prime Minister, Sir Lynden O. Pindling and her family.   “I reserve special thanks today for my own family,” she said. “To my dear husband, it was my singular good fortune to be by your side from 1956 until your passing. Everything I am I owe to you.”

She thanked the Bahamian people for the opportunity to serve and for their support.  “I turn my sentiments of gratitude now to the people of our nation. Far more than words can adequately express, I am thankful for their support and encouragement throughout my tenure as Governor General. Throughout my time here, my singular objective and desire has been to serve the Bahamian people to the very best of my ability, and to do so without distinction of social rank, race or political allegiance. Despite our differences, we are all Bahamians,

She said that she has now finished the race and did her best.   “Thank you and Goodbye.  Long Live the Commonwealth of The Bahamas.”