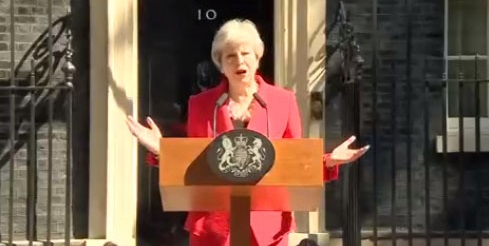 A new Tory Leader will take over as the next Prime Minister of Britain, today Theresa May resigned; Brexit befell her.

“I have done everything I can to convince MPs to back that deal, sadly I have not been able to do so.  I tried three times. I believe it was right to persevere even when the odds against success seemed high, but it is now clear to me that it is in the best interest of the country for a new prime minister to lead that effort,” said Theresa May mere hours ago.

The resignation as leader of the Conservative and Unionist Party takes effect on Friday June 7, 2019.

The week after May officially leaves office, the party will elect a new leader and that person will become the next Prime Minister of Great Britain. However, Labour Party Leader, Jeremy Corbyn believes a general election should decide that.

It is widely reported that Boris Johnson, a strong Brexit proponent is the front-runner but it will be up to about 130 Torries to decide.

“It is and will always remain a matter of deep regret to me that I have not been able to deliver Brexit,” Mrs. May added, “It will be for my successor to seek a way forward that honours the result of the referendum. To succeed, he or she, will have to find consensus in parliament where I have not.  Such a consensus could only be reached if all sides of the debate are willing to compromise.”

The referendum to which Prime Minister May refers is the one which thrust the UK into a three-year row over a British exit of the European Union.  May said she had done her best to find a way out of the EU with a deal.  Proposed ‘deals’ have been rejected in parliament and a new deadline for Brexit is extended to October 31, 2019.

On the steps of #10 Downing Street, May faced her public with tears saying she will go.

“I will shortly leave the job that has been the honour of my life to hold, the second female Prime Minister but certainly not the last.  I do so with no ill will but with enormous and enduring gratitude to have had the opportunity, to serve the country that I love.”

Theresa May came into office in July 2016.  The next UK General Election is scheduled for 2022. The new Prime Minister is expected to take office by end of July.