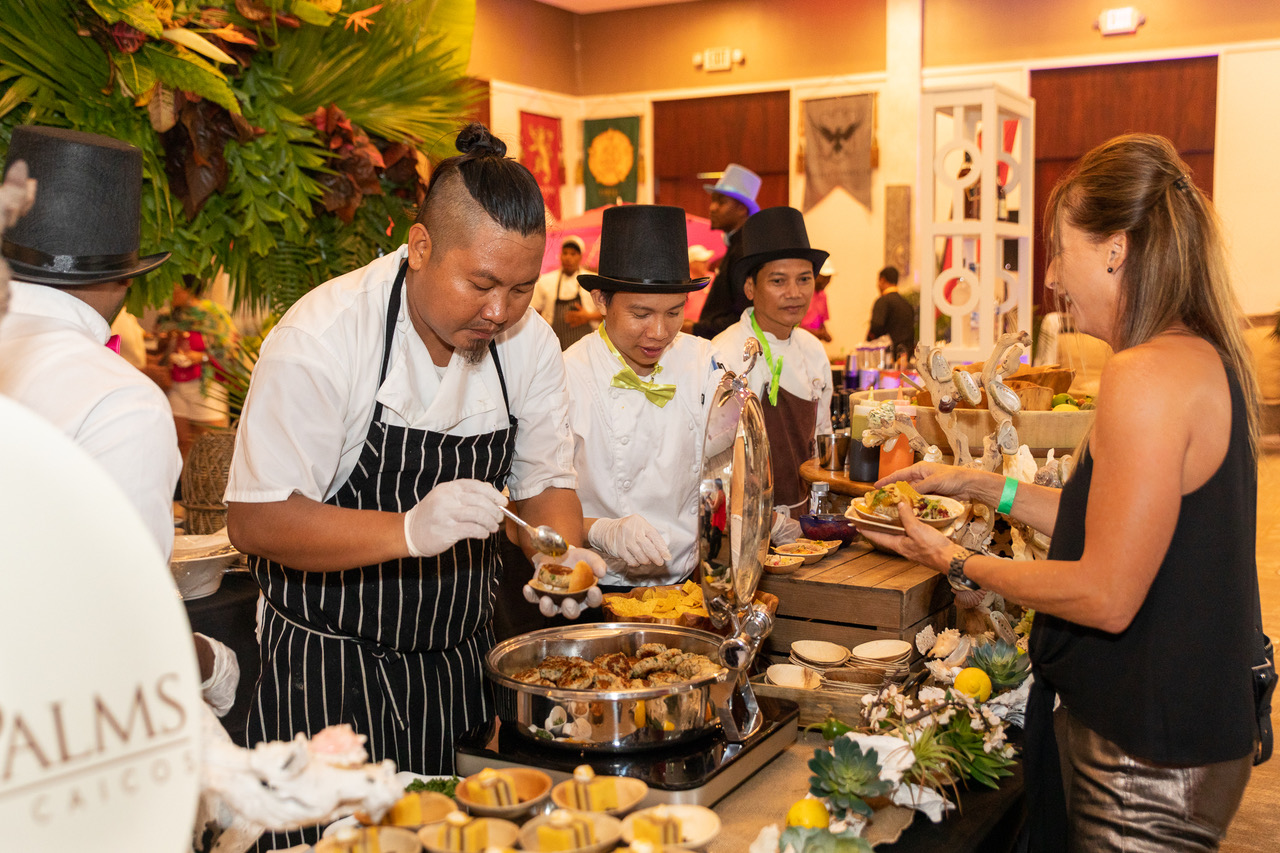 #Providenciales, May 23, 2019 – Turks and Caicos – The Turks & Caicos Hotel and Tourism Association’s (TCHTA) annual Taste of Tapas culinary showcase was another sold out, fundraising success. Despite the rainy weather, supporters came to the May 18th event in droves to dine on an array of delectable bites from the island’s leading restaurants and chefs.

Hosted at the award-winning Shore Club on Long Bay Beach, the Saturday night extravaganza, which featured an indoor and outdoor dining experience, attracted scores of event-goers as the food enthusiasts came together to help raise $40,000 for the TCI Hospitality Adventure Summer Camps, to aid in Team TCI’s to travel to the annual Taste of the Caribbean culinary competition, and the continued training of the young people who benefit from these programs.

“We are always grateful for the support we get year after year for our Hospitality Adventure Camps and the TCI Culinary Team,” said CEO of the TCHTA, Stacy Cox. “The fact that the event sold out once again goes to show the amount of committed support we can count on from our TCHTA members and most especially the community.”

The annual Taste of Tapas event has grown each year tremendously, drawing hundreds of supporters.  Notable highlights from the 2019 Taste of Tapas culinary extravaganza included an edible spoon from the Solana Restaurant, a 67lb cut of beef from Beaches Resort, and an enormous smoker and live TCI costumed mannequin from the Turks & Caicos Collection. Coca Cola (TC Refreshments) also debuted one of their premier products, the sparkling Dasani water which was served to guests with a fruit infusion. The water features an environmentally conscious plant-based bottle.

Organizers added a new spin this year, replacing the usual silent auciton with a live one, conducted by popular auctioneer, Mr. O’brien Forbes.  Prizes were provided by a number of resorts and businesses including; Sailrock, The Somerset, COMO Parrot Cay, Wymara, Seven Stars, Beaches, Amanyara, Bianca Sands, and the coveted prize, setting the record as the largest prize donation in the history of this event, came from Turks & Caicos Collection’s Ambergris Cay with a 5-day stay valued at $30k.

“I would like to extend a heartfelt thank you to our hosts, The Shore Club on Long Bay Beach, the participating restaurants, our silent auction donors, and Prime DJs for entertaining us throughout the event. Thank you to Graceway IGA for donating items to the culinary teams and all of the supporters that came out and helped to make the night amazing.” the CEO said.

“Every year we depend on these member resorts and restaurants who graciously support their teams with whatever they need to put this fantastic showing of TCI’s culinary skills on display in support of our programs. We cannot thank them enough.” said Cox.

Cox is encouraging the community to send their children to participate in the upcoming Hospitality Adventure Camps which will happen during the month of July, and to look out for news on Team TCI as they prepare to represent Turks and Caicos once again in Miami this June.

This year the team will be led by Executive Chef Jason Heath of  the Turks & Caicos Collection and will include Chef Joseph Charles of Grace Bay Club, Chef Martin Wilkiens of Seven Stars Resort, Chef Eversley Rowe of Kalooki’s, Chef Nikita Skippings (representing the Cook Off Chop Off Championship), Chef Walky Gedeon of Solana, Chef Rajaskear Ravindran of The Hartling Group, Junior Chef Kevin Missick from the Turks & Caicos Community College, and Junior Chef Inga Stubbs, both products of the TCI Hospitality Adventure Lit’l Chefs Camp.  Bartenders Aris Florida of Amanyara and Delorno Mosley of Kalooki’s are the team’s bartenders.

For more information about the TCI Hospitality Adventure Camps, interested persons and organizations are encouraged to call the TCHTA office on 339-5787 or visit their social media pages.