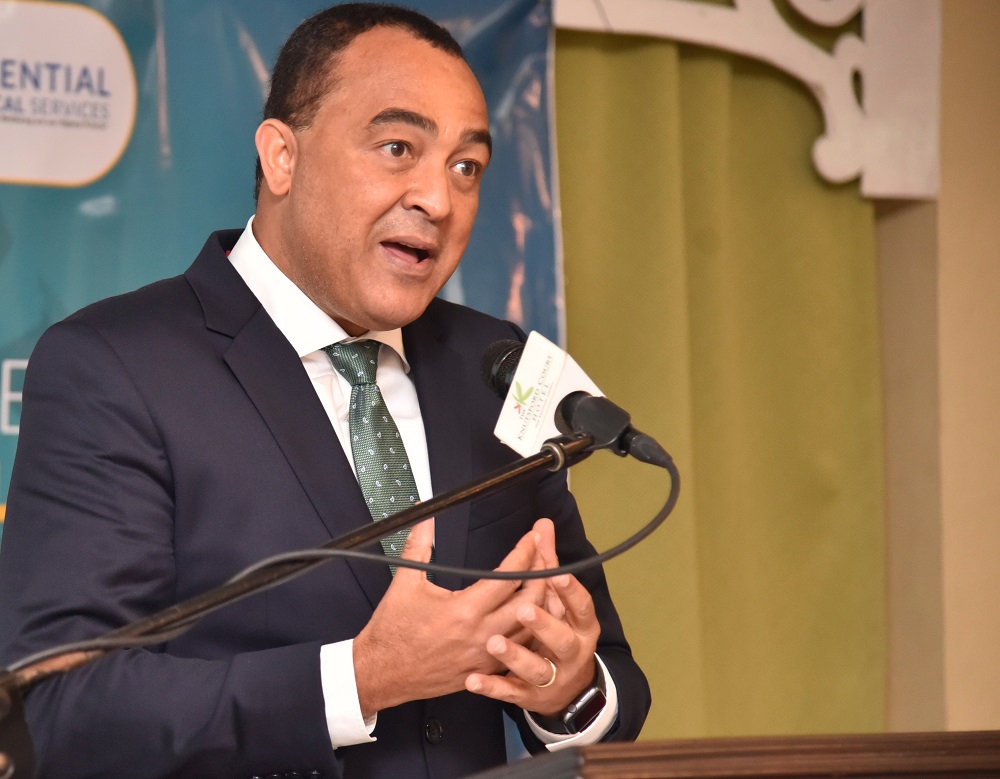 #Kingston, May 14, 2019 – Jamaica –  Minister of Health and Wellness, Dr. the Hon. Christopher Tufton, is calling for elimination of the stigma and discrimination associated with HIV/AIDS in order to stem the spread of the virus.

His appeal comes in light of the findings of the 2017 HIV/AIDS Knowledge, Attitude, Behaviour and Practice (KABP) survey,  which not only indicated that accepting attitudes towards persons living with HIV/AIDS  remained low, but declined from 14.3 per cent in 2012, when the last survey was done,  to 11.6 per cent in 2017.

The survey, conducted by Hope Research Group, sampled 2,000 persons aged 15-49. The findings were revealed at a function at the Eden Gardens Wellness Resort and Spa in St. Andrew on May 9.  Among the questions posed was a willingness to purchase fresh vegetables from a vendor known to be HIV-positive, which is a common measure of discriminatory attitude used in population-based surveys.

The research indicated that only 23.7 per cent of persons, 15-49 years old, either agreed or strongly agreed that they were willing to buy fresh fruits and vegetables from a HIV-positive vendor.

Dr. Tufton argued that it is this fear of stigma and rejection that contributes to a delay in persons accessing HIV care.

“Persons, who may have signs and symptoms or who know their status, are unwilling to turn up at the hospitals or the clinics to be treated… hence increasing their risks,” he pointed out.

In emphasising his point, the Minister cited the case of an actress in a local HIV education commercial, who was branded as being an HIV patient.

“It really highlights the challenges we face in our society…We have to change that mindset…Let’s stop the discrimination,” he stressed.

The Health and Wellness Minister pointed to the 2017 United Nations Programme on HIV/AIDS report on confronting discrimination, which noted that people living with HIV who perceive high levels of HIV-related stigma were 2.4 times more likely to present late for care.

“Part of what is coming out of the analysis is that a big part of the treatment and viral suppression and the failure to achieve higher targets is linked directly to the stigma issue. It is not unique to HIV; we are struggling as a society with mental illness and stigma also, where persons who are perceived to be mentally challenged are abandoned because they are “mad” and not curable,” he said.

Turning to other findings in the survey, Minister Tufton said there was an increase in multiple partner relationships among persons 15 to 24 years old.

“Some 65 per cent of persons reported having multiple partner relationships in 2017 compared to 58.1 per cent in 2012… .  Having multiple sex partners increases the risk of sexually transmitted infection (STI), including HIV,” he noted.

He said the survey also indicated that knowledge of HIV transmission has declined when compared to 2012.

“The 2017 survey tells us that among the cohort of persons, ages 15 to 24, only 32.9 per cent were able to correctly identify ways of preventing transmission –which is 100 per cent condom use and one faithful partner – while rejecting major misconceptions in terms of transmission and prevention. There is a challenge there because a lot of persons still buy into some of these misconceptions,” he noted.

He added that this represents a decline in correct knowledge over 2012 among males and females, and more so females.

Dr. Tufton said the research is critical as it will inform the Ministry’s HIV-prevention and treatment programmes and interventions.