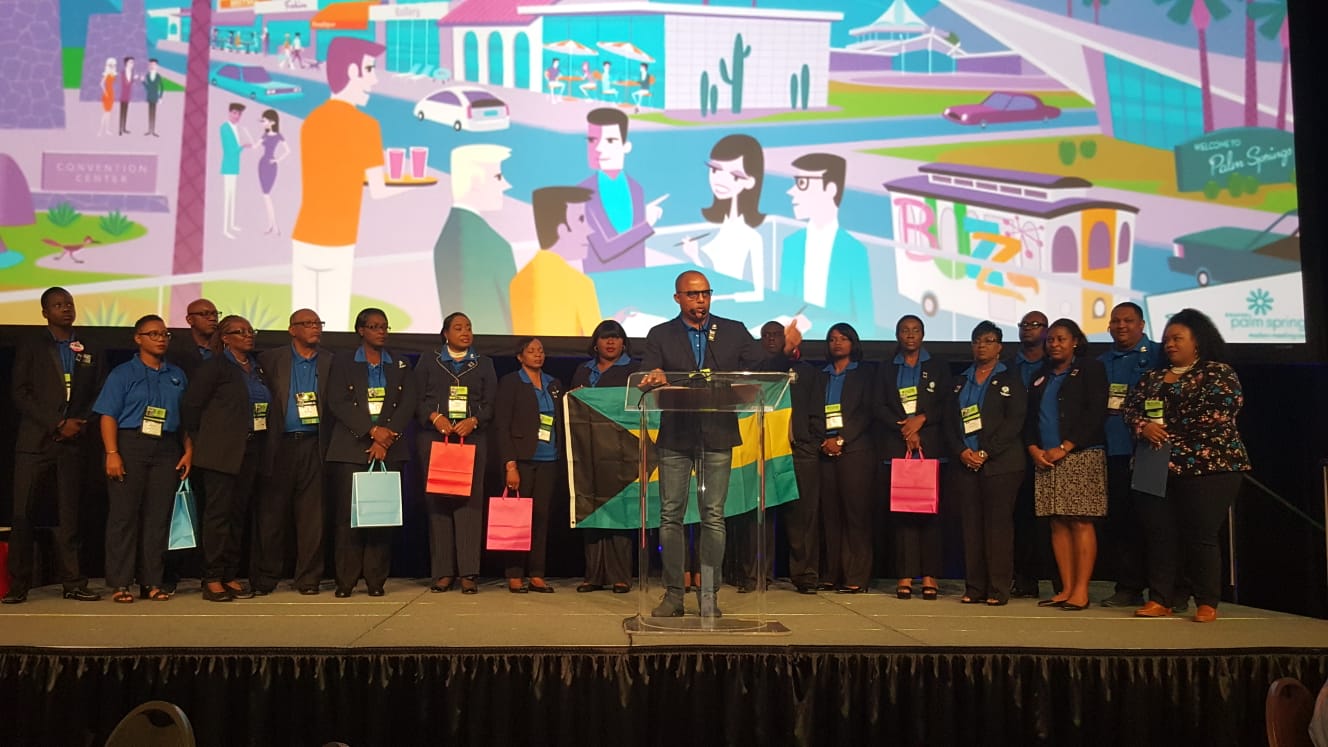 #Nassau, May 20, 2019 – Bahamas – Minister Dames along with members of the National Neighbourhood Watch Council (NNWC), neighbourhood watch group leaders and members, and police liaisons attended the Neighborhoods USA (NUSA) Conference, May 15th – 18th, 2019 in Palm Springs California. The purpose of the conference was to bring together neighbourhood groups from throughout the United States and other parts of the world to share best practices as they related to community residents, law enforcement and other community partners with the intent to foster safer communities.

For The Bahamas, specifically, the Blair Citizens’ Association is the first known neighbourhood watch group, formed in 1975.  Since then many more neighbourhood groups have followed; however, the groups lacked standardization and existed in silos. Since coming to office in 2017, Minister Dames envisioned and has facilitated the development of more comprehensive and purposeful neighoubrhood watch groups. In accordance, in July 2018 the National Neighbourhood Watch Council was launched. The Council serves as the overarching body to coordinate activities among the respective groups throughout The Bahamas. The new and progressive initiative seeks to encourage and assist communities wishing to form neighbourhood watch groups.

Despite its short existence there are now 112 neighbourhood watch groups, of which 90 are in New Providence, 16 in Grand Bahama, and 6 in Abaco. For the first time police liaisons were introduced and they serve to provide a direct link and partnership in the fight against crime. The liaisons also serve to provide training, guidance and support for their respective groups. Minister Dames and representatives from The Bahamas aimed to garner and share best practices with NUSA’s presenters, strategists, practitioners and citizens. There were over 700 delegates from throughout the United States and The Bahamas, which had the largest international delegation in attendance. The objective for the Bahamian delegation was to gain extensive knowledge on how the Ministry of National Security, NNWC, law enforcement and concerned citizens could build stronger communities in The Bahamas.

Another purpose of the neighbourhood watch groups was to inspire young people, especially young men. Neighbourhood watch groups are not only concerned with fighting crime but on building stronger communities through partnerships. Of the 21 persons who travelled to the conference, Mr. Watson Castin was the youngest member of the group and one of the youngest to join his neighbourhood community group.  He resides in the Bain and Grant’s Town Constituency and instead of allowing the challenges of being in a community with a high propensity for crime decide his life choices, he has chosen to live a crime and drug free life. The conference in Palm Springs represented many first for Mr. Castin as this was his first time travelling internationally. While most Bahamians’ first international trip is usually to Florida, Mr. Castin’s was sunny California.  For him, through the trip, he hoped to increase his knowledge base to develop into a responsible contributing member of society. He hopes one day to become a member of the Royal Bahamas Police Force.

During the opening ceremony, Mr. Dames acknowledged that the respective neighbourhood watch groups are pivotal to the success and development of communities, and that the present challenges did not mushroom overnight but festered due to neglect.  He posited that community residents should work together to devise grassroot strategies to foster neighbourhoods that reflect their distinct values and beliefs: It is only through the individual efforts of each neighbourhood watch group that collectively countries will be able to enjoy safe places to live, work and prosper.

The NNWC of The Bahamas will travel to Exuma and Eleuthera to introduce the concept of neighbourhood watch groups. This will be followed by committee members of the NNWC, law enforcement, neghbourhood watch groups, corporate Bahamas and community activists preparing for The Bahamas’ first neighborhood watch conference which is scheduled for October. The conference hopes to expand the work of the Council and respective groups.