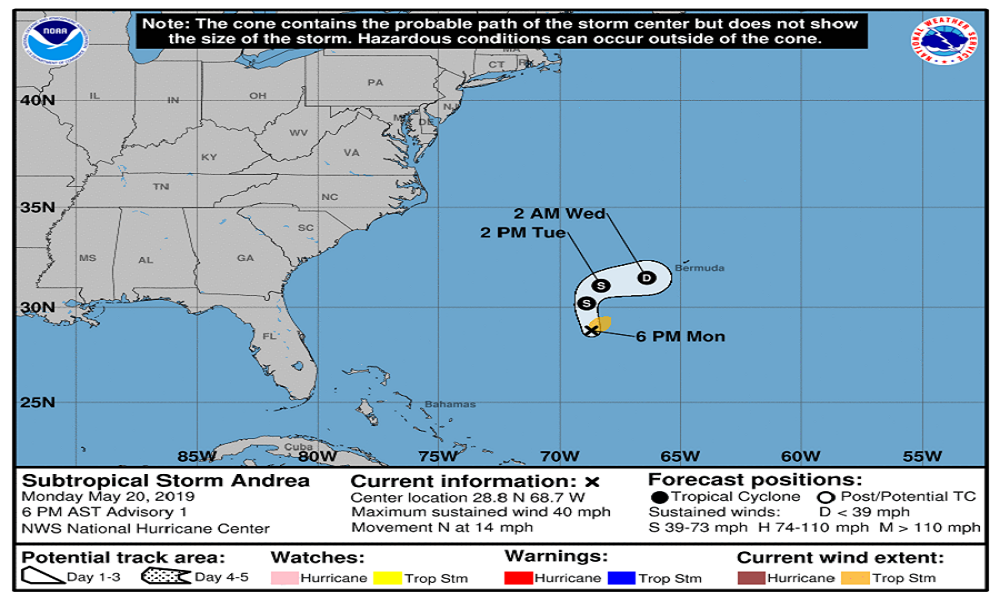 #Providenciales, May 21, 2019 – Turks and Caicos – No land mass is expected to be impacted by the first named system of the 2019 Atlantic Hurricane Season; Tropical Storm Andrea was formed today in the northern Atlantic Ocean near Bermuda but is expected to weaken by tomorrow and dissipate by Wednesday, according to the National Hurricane Center.

The tropical storm comes 12 days before the official start of the hurricane season, which begins on June 1.

From the National Hurricane Center tonight, there is this from Public Advisory #1:

At 6:30 p.m. the center of Subtropical Storm Andrea was located near latitude 28.8 North, longitude 68.7 West.  The storm is moving toward the north near 14 mph (22 km/h).  A decrease in forward speed and a turn to the northeast is expected on Tuesday, followed by an eastward motion by Tuesday night.  On the forecast track, the center of Andrea is expected to remain southwest or south of Bermuda during the next day or two.

Data from an Air Force Reserve Hurricane Hunter plane indicate that the maximum sustained winds are near 40 mph (65 km/h) with higher gusts. Slight strengthening is possible overnight. Weakening should begin late Tuesday, and Andrea is expected to dissipate on Wednesday.

There are currently no coastal watches or warnings in effect. The Center is advising interests in or near Bermuda to keep watch.

An updated advisory will be issued by the National Hurricane Center at 11 p.m.