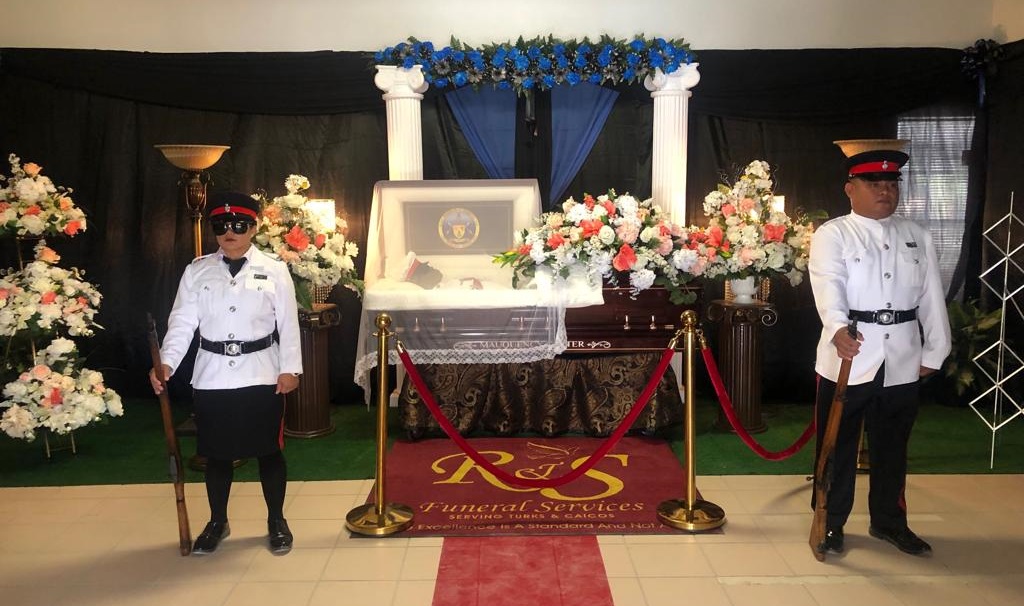 #Providenciales, April 14, 2019 – Turks and Caicos – One month and two days after his shocking death by traffic accident in the early hours of Commonwealth Day public holiday on Monday March 11, 2019, the official home-going services for Police Constable 223 Mauquency Mauriceson Samuel Carter have started… yesterday, a public viewing of the popular young man was staged at the Police Barracks in Providenciales.

The viewing, which ran from 12 p.m. to 4 p.m., attracted many, many people; a cross-section of residents including dignitaries like Acting Governor, Her Excellency Anya Williams and Minister of Tourism, Hon Ralph Higgs.

At 5 p.m. there was a motorcade from Grace Bay Police Station to the Down Town Ball Park where the Providenciales ‘End of Watch’ Memorial for the late Officer Carter took place, from 7 p.m.

Carter was driving his Wrangler Jeep along Leeward Highway around 2 a.m. when somehow it flipped; the severity of the car crash killed him; he was pronounced dead at hospital at 2:47 a.m.  Details of the accident were described as “developing”. A woman driver involved in the crash in a separate vehicle was also taken to hospital for treatment.

The father of two was hailed as an outstanding young man, with a sunny personality, vivacious nature, friendly, respectful, firm and always ‘fresh’ in his appearance.  A member of the Tactical Unit and kin to a popular Turks and Caicos family, the effect of and sadness at the news of his death were tremendous.

Officer Carter, who was 29 years-old, will be honored with a Full Military Service on Wednesday in his hometown, the capital of the country, Grant Turk.

Viewing in Grand Turk will take place from 10 a.m. to 6 p.m. at the Grand Turk Police Station on Tuesday April 16, 2019.  The ‘Final Salute’ funeral service begins with a police procession from the station to the Salem Baptist Church; service to start at 10 a.m.

Interment for the late Constable Mauquency Carter, who joined the Royal Turks and Caicos Islands Police Force in 2007, will be held at the Methodist Church Yard.

TCI: Bringing the ‘holiness’ back to Holy Week