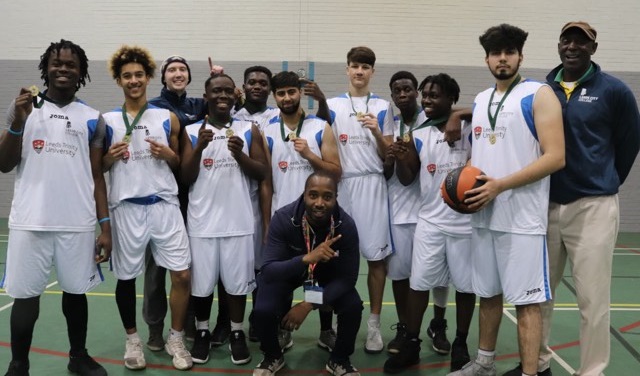 #Leeds, United Kingdom – On Wednesday 3rd April, the Leeds City College basketball team defeated Notre Dame Sixth Form 70-28 to win the Association of Colleges Yorkshire League. It is the first year that the college has competed in the league and they have been crowned champions thanks to the help of four players from the Turks and Caicos Islands; Randy Jean-Guy, Renaldo Gabriel, Ronal Sainvilus and Shane Delicate.

Captain of the team, Randy Jean-Guy, led the team and the league in scoring this season with an average of 24 points per game.

Speaking about the four players, Coach Will Hopper said: “These boys played a major part in our championship winning season and they deserve to be recognised for their hard work and achievements both here in Leeds and back in their homeland.”

He added: “Over the last three years, we’ve had a total of eighteen players originating from Turks and Caicos and I am told that there will be more players coming over to join us in September. It has been a very successful link between the college team and Turks and Caicos and we hope that it continues.”

The basketball programme at Leeds City College has been running for three years now and there has been an influx of students on the team from the Turks and Caicos Islands; eighteen in total over the three years. We are very proud of our cultural diversity at the college and on the basketball team with players hailing from the Caribbean, Eastern Europe and Asia.

With this season’s success, the college team is becoming a basketball academy in September where students will be able to mix between the court and the classroom with schedules that combine focused basketball training and game time with academic support.