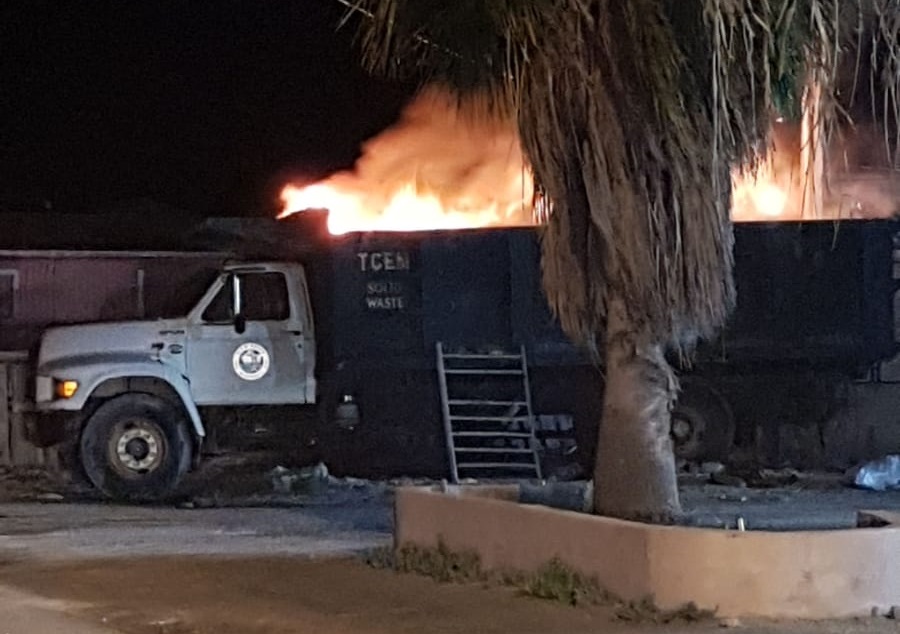 Grand Turk, April 25, 2019 – Turks and Caicos – Before the fire crew arrived at the scene at Sunny Foods in Grand Turk; residents took matters into their own hands and worked on the intentionally lit blaze.

Photographs of the site in Backsalina show the dump ignited; they also show residents around the inferno and then a picture of the empty buckets of water and smoldering from the vanquished blaze.

Police today commented that, “Police on Grand Turk are investigating two fires that were reported on Wednesday, April 24th, 2019.  In the first incident, at 12:05 a.m. 911 received a report of a small garbage fire on Front Street, in the Vicinity of the Cockburn Town Beverages and the Grand Turk Library. At 12:24 a.m., 911 received a second report of a fire located at a Grocery Store on West Road.

According to reports, the trailer that housed garbage was set on fire.  Both fires were extinguished by the Fire Officials, with the assistance of private citizens.  One male was arrested on suspicion of setting fire to a building. He remains in Police Custody.”

It is said the man in custody for the torching of the make-shift dump and another small fire, also attempted a break-in at a local liquor store.

The man behind the mayhem is in custody after reportedly being caught on camera in the act of committing the crimes.