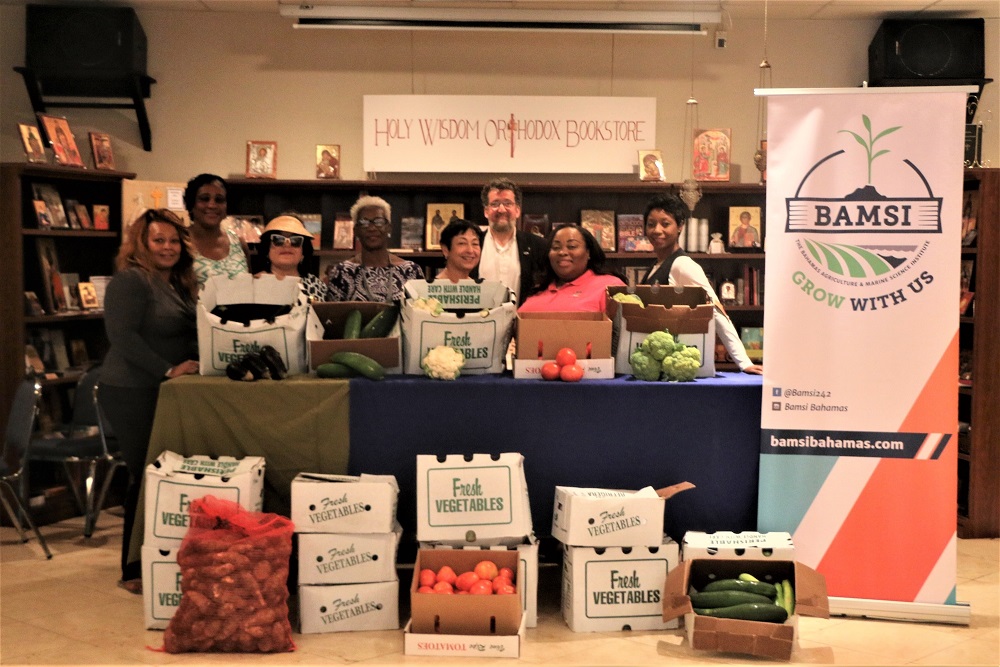 #Nassau, April 4, 2019 – Bahamas – The Bahamas Agriculture & Marine Science Institute (BAMSI) donated twenty cases of local produce, fresh from its farm in Andros to The Lord’s Kitchen. This bountiful donation has touched the heart of co-founder Artemis Zervos, who along with her team of volunteers, feeds up to 800 homeless and unfortunate persons throughout New Providence every week (every 1st – 3rd Saturday). The Kitchen’s layered mission of feeding the less fortunate connects with BAMSI’s new mandate to consistently donate quality surplus to local agencies and charitable organizations that are at the forefront of the fight against hunger.

Founded in early 2000 as a ministry by Nicholas and Artemis Zervos, the Lord’s Kitchen had a humble home beginning and later expanded as an extension of the Greek Orthodox Church located on West Hill St. in 2015. This extension was made possible by Father Irenaeus and Presvytera Alexandra Cox who generously allowed the ministry to be a part of the church, and in full use of its facilities and storage space, and subsequently, to feed a larger number of persons. The Kitchen donates meals to several nursing homes, as well as youth and charitable organizations including the All Saint’s Camp, the AIDS Foundation, Boy’s Brigade and Unity House.  Through BAMSI’s donation, the Kitchen showcased baked eggplant and zucchini served with pita bread, chicken and white rice; a meal the receivers most appreciated.

As the brainchild of Chairperson Tennyson Wells, the BAMSI Give Back Foundation is a way for the Institute’s employees to connect the work they perform daily (farming, stocking and promoting) to the creation of a stronger, more food secure community.  One of the goals of this experience is to help to build a more productive and engaged workforce. Through the Foundation, BAMSI zeroes in on wastage, redirecting wholesome, healthy and locally grown fruits and vegetables to Bahamians who need it the most.

Each donation’s characteristics is different as it’s based on seasonal, fresh produce, and what is available from Andros.  The donation included fresh tomatoes, eggplant, broccoli, lettuce, zucchini, cauliflower and eddies. Key individuals involved in the Give Back include BAMSI Marketing Manager Trevor Mackenzie, who leads the Distribution Centre (where the items are kept once transported from Andros) and his team, as well as the Communications and Public Relations Officers, Yolanda Deleveaux and Antonique Sands, respectively, and Lakeira Brown (photographer).