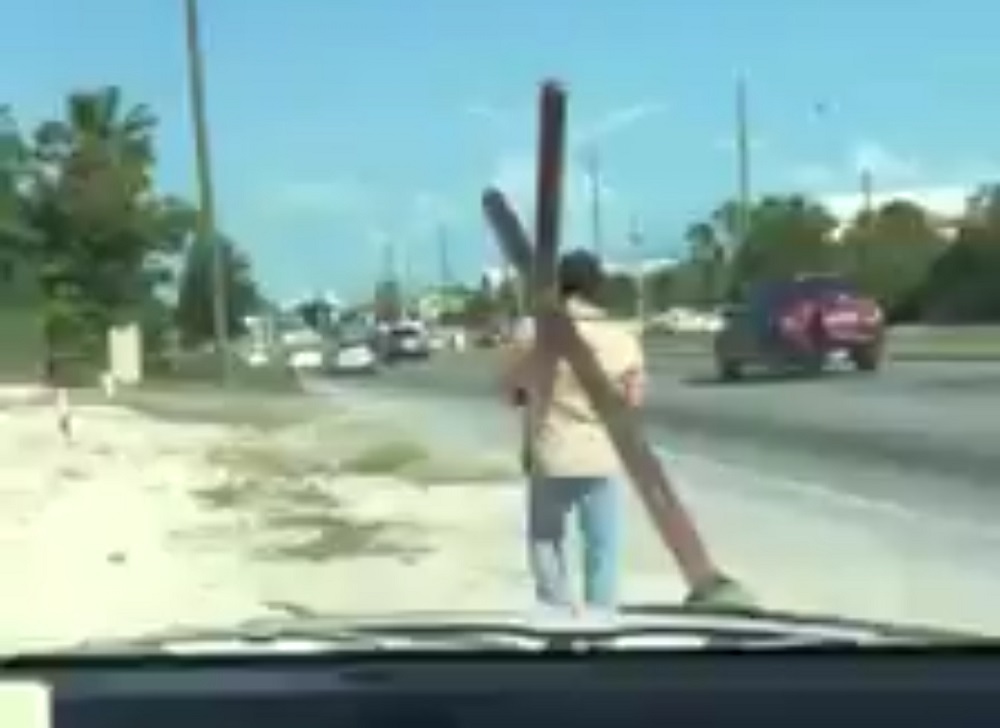 #Providenciales, March 21, 2019 – Turks and Caicos – A man who has been carrying ‘the cross’ for more than 35-years has found his way to the Turks and Caicos Islands and today, residents of the island pulled onto the side of the street to engage with the man who was dripping with sweat, boasting an effervescent smile and paused to greet each person in the car with a robust handshake before he told his story…

“God Bless you! I have been carrying the cross for 35-years, all around the world, more than 175 different nations.  In 1985, I felt like God spoke to my heart and the only way I can describe is like, you know when they brand the animal, with the fire…yeah.  I felt like God was speaking this message to me, saying, ‘Identify my message of love on the highways and roadsides of this world.  You see there are many churches that people will never come into and but Jesus said go into the highways and byways and compel them into My Father’s house and so he gave me this privilege.”

The man, with a beaming smile said he has been jailed over 40 times, the cross he carries has been banned more than 50 times and he has even been struck by cars; four times.

“I have been attacked by animals.  I have been chased by elephants two times, hippos two times, almost eaten by a lion; two times almost eaten by crocodiles when I was in Africa.  Chased by rhinos one time, attacked by a bear one time.  I have been bitten by dogs, cats, rats, bats, wombats.  A monkey bit me on my neck, a baboon bit me on my behind.  This mark here (gesturing his hand) is from a snake that bit me, it nearly killed me and this mark here (pointing to his forehead) is from a spider that bit me in the Amazon.  But by the Grace of God I am alive.”

Guns have been pulled on this champion of the message of the Cross of Jesus Christ; pointed at his head, into his ear and down his throat.

He identified himself as Keith Wheeler; he is an American pastor.  Pastor Wheeler then prayed for the individuals in the car – worshipping God and calling the group ‘precious’ and ‘kind’ and the Turks and Caicos, ‘an incredible island nation’.

Keith Wheeler has a Facebook page, where is it explained that he has walked 23,000 miles on seven continents with his 12-foot wooden cross; which is apparently able to disassemble in order to journey the world in fulfillment of his Gospel mission for the advancement of the Kingdom of God.

The video, which was just over 20-minutes in length, was shared on Facebook by Jermaine Fulford Jr and sent to Magnetic Media on WhatsApp.