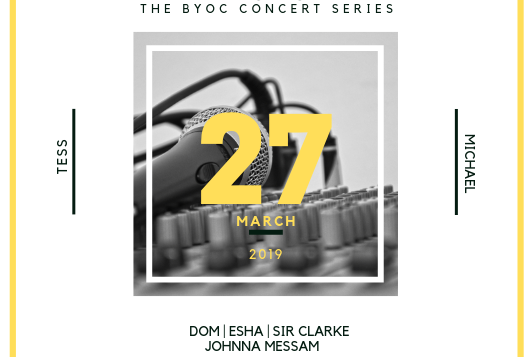 #Providenciales, March 16, 2019 – Turks and Caicos – In anticipation of BYOC’s second anniversary, TESS PRESENTS, will be filming a Concert Series, which will culminate at the Clement Howell High School on Thursday April 11. We will feature acoustic melodies and soothing vocals from the BYOC family and special guests including Lady Livz, Dom Rolle, Janardo Laporte, Levenia Hamilton, Johnna Messam , POP Winners, and more.

BYOC – (Bring Your Own Creativity) was the brainchild of TESS that came to life in March 2017. It was set to be an informal gathering of people who needed an outlet in the arts field.

It has grown into a community of creatives, that foster a safe space for each other to grow, excel and collaborate on a higher level of performance, goal setting, production and expression.

BYOC regulars (Allstars), have seen personal and combined successes since the it’s inception. Included in these have been the release of local rapper’s Lady Livz’ mixtape “Daddy Issues”, Sir Clarke and Aysha forming (Vibrant Vibrations) – a Jazzy paint duo duo, Ballerina Buoy, now a dance teacher at the Edward Gartland Youth Center and the collaboration of so many artists producing original music.

The link below is the latest accolade of the BYOC crew, captured so wonderfully by Dominique Rolle – A BYOC ALLSTAR Poet/Performer/VisualArtist

The celebration begins at the Lounge at West Bay Club, Grace Bay Beach on Wednesday 27th March and continues at the Breakfast Garden at the Palms Turks and Caicos on April 5th, both shows starting at 7pm with entry fee of $10 and cash bar available.

On April 11th from 12pm – 3pm, the first BYOCYouth will be held at the Clement Howell High School (no entry fee) which will be a great first, to celebrate their second!