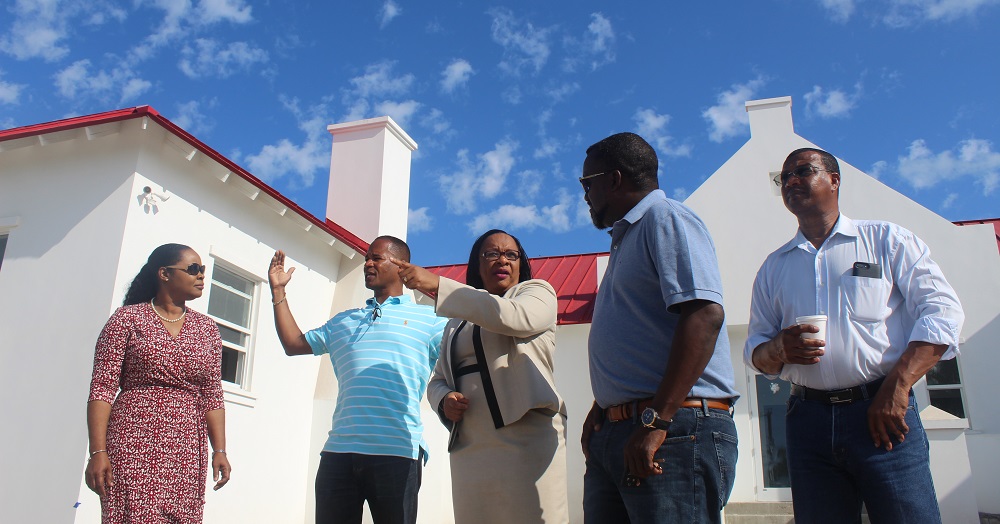 #Providenciales, March 23, 2019 – Turks and Caicos – A site tour today labels the construction work of the new post office building in Providenciales as a magnificent, first-class structure.

The grounds are being manicured, the interior of the structure is being fine tuned and outfitted, there is 90-degree parking space, it is video surveillance ready and 3,000 post office boxes are earmarked for the new build.

“It’s huge and certainly when I walked inside, I was then surprised and most of the space will go to the personal touch of more persons having post office boxes and so I am very pleased, I am very pleased with the work of Jamalco,” said Hon Sharlene Robinson, also Minister of Finance, “I think this is certainly a plus and those post officers users would appreciate it.”

Restrooms, office spaces, ceilings and more were discussed and explained by Mr. Malcolm, who was awarded the $1.5 million government contract and who started construction in March 2018.

“Well today we just did a tour of the post office to see how far the contractors have come along in their work and I must say that I am proud of the job that they are doing and I am hopefully we will open this building up by the end of April,” said Hon Delroy Williams who has responsibility for the Post Office service.

It was revealed in Cabinet that a proposal to name the building in honour of the country’s first post master, George Brown was approved.  Minister Williams says he is not at all surprised by the outpouring of approval for the honour of Brown’s legacy.

“As a little boy growing up in Wheeland, Mr. Brown was known to many of us as the Postmaster, the policeman and he was also the priest of the church. Everyone knows this man and I believe it is great for the community of Blue Hills to name this magnificent building after such a great man.”

The Post Office was condemned after employees, in 2014, staged a sit-out; citing health concerns, infestation of rodents and cramped quarters.  It was one of the issues championed by the PDM party while in opposition.

By the end of April 2019, staff will return to the Post Office in Providenciales and the Premier believes the postal service still has an important place in modern society.

“A lot of people think it is a fading use in service but the post office is growing in many different ways in the types of services that they are delivering.  So, first class building for first class service,” she said.