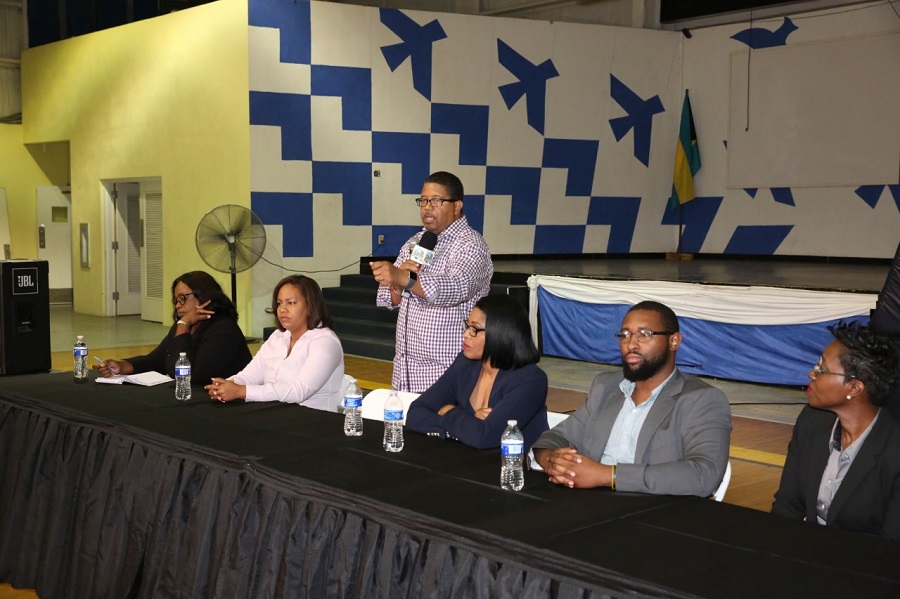 After successfully launching the program in East Grand Bahama last month, Deputy Prime Minister and the Minister of Finance the Hon. K. Peter Turnquest said he wanted to give residents in Eight Mile Rock and West Grand Bahama the same opportunities to become successful entrepreneurs. He noted that the residents of Eight Mile Rock are no strangers to start-up businesses.

“You here in West Grand Bahama, you have a history of entrepreneurship and for anyone driving up and down the main street here it is evident. But is it not interesting that people still drive down to Freeport to shop?

“So, you have to ask the question, why have all the big businesses that were set up here closed down? I think what it says is that we have to first learn to support one another and then it tells me that before you launch into a business, you must first determine, by research, what it is the people in this community want. What sorts of businesses in this community will they support?

“The Small Business Development Centre (SBDC) will help you make that determination and give you an idea of just how viable your business idea will be for this community.”

Minister Turnquest told those who had gathered for the launch of the SBDC that when the Free National Movement came to office, they held a series of consultations and brain-storming sessions to see how they could create some sort of programs that would help to empower the ordinary Bahamian.

The creation of the SBDC was birth out of those consultations.

“Like you, we heard the cries that Bahamians feel by and large that there are advantages that are given to foreign investors that are not given to Bahamians. That a foreigner can come to this country, and because he has access to easy money or to networks, which Bahamians are not able to access, can get an advantage over us in our own country.

“Obviously that is inherently unfair.”

However, Minister Turnquest noted that for the most part, Bahamians have never been taught how to be entrepreneurs, or how to think with an entrepreneurial mind-set and to take risk. He said that Bahamians, as a people are very risk averse.

He said many Bahamians believe that they would like to be business owners, however, not that many are willing to take the risk, leave a secure job and go out to pursue their dreams.

“Thinking through this problem, we asked what could we do to address that lack of entrepreneurial thinking in our people, to address the fear that leads to this reluctance for people to strike out on their own, and how do we get financiers to get over their uncertainty of taking a risk on our people.

“We came up with this idea of the small business development centre, whose objective is to help the ordinary Bahamian to think through an idea. And those ideas can be diverse as we are a people.

“The idea is to have you be as creative and as opened as you possibly can.”

Minister Turnquest encouraged those present at the SBDC launch to “look within themselves” to discover their respective talents and to consider that desire of doing the things that would make them happy to get up each morning and pursue that dream in their hearts.

“Then we encourage you to come to the Small Business development Centre and talk through it with one of the Advisors, so that you can determine, with their help, whether your idea is commercially viable. It is great to have a hobby, but if you cannot turn it into money, then it is just a hobby.

“They will walk you through the idea, from the inception, to developing that business plan, so that we can test it to ensure that it is a reasonable idea. You are taken through the training so that you can understand business.”

The SBDC will then help the prospective entrepreneur to find the funding necessary to bring the business idea to fruition. DPM Turnquest said that one of the beauties of the SBDC program is once an individual goes through the SBDC, it gives their business plan credibility.

Photo Caption: Deputy Prime Minister and Minister of Finance, the Hon. K. Peter Turnquest (standing) addresses the crowd who showed up for the launch of the Small Business Development Program in West Grand Bahama at the Eight Mile Rock School Auditorium, Friday, March 8, 2019. Also on hand for the launch was Parliamentary Secretary in the Office of the Prime Minister and Member of Parliament for West Grand Bahama, Pakesia Parker-Edgecombe (seated, third from right).