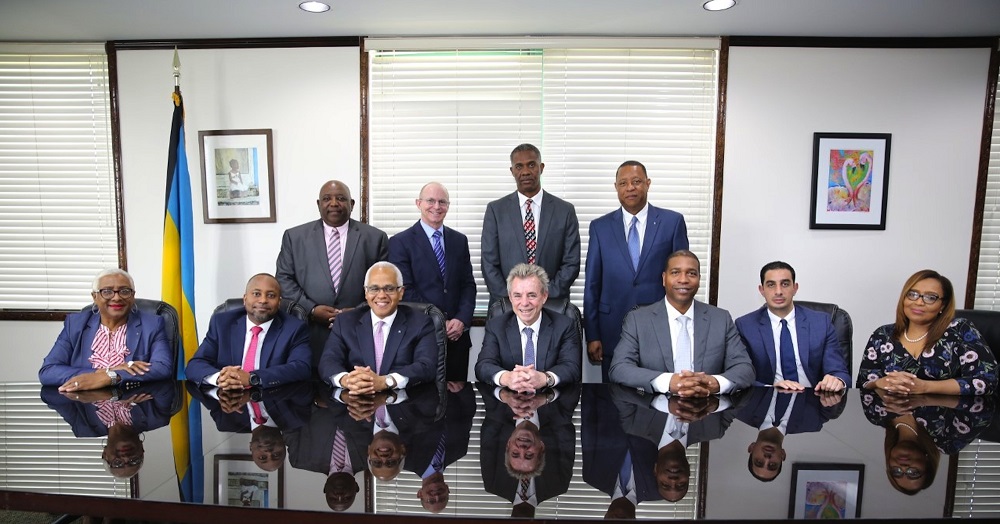 Those were the sentiments of Minister of Tourism, the Hon. Dionisio D’Aguilar, during an official press conference on Wednesday, March 27, 2019 in the Office of the Prime Minister, as a part of the signing of a Letter of Intent (LOI) for the purchase of the Grand Lucayan resort.

The LOI was signed between Lucayan Renewal Holdings and ITM/Royal Caribbean joint venture. The deal is expected to transform the Grand Lucayan resort and its surrounding areas, as well as develop the harbor in Freeport into a destination product using water-based adventure theme parks. Both ITM and Royal Caribbean have worked on successful projects in the past.

“I am pleased to announce to the people of Grand Bahama and to the entire Bahamas that the much-anticipated sale of the 217-acre Grand Lucayan resort has finally been agreed upon,” added Minister D’Aguilar.

“The development that will roll out in Grand Bahama over the next 24-36 months will go far in restoring the island’s economy to its former glory days.”

Minister of State for Grand Bahama, Senator Kwasi Thompson noted that the signing of the LOI confirms the government’s agreement to enter into exclusive negotiations with Royal Caribbean International and the ITM Group for the purchase of the Grand Lucayan resort and the redevelopment of Freeport Harbor into a cruise port of choice.

“The $195 million investment earmarked for the first phase of the project over a twenty-four month period will include the purchase price of $65 million and the creation of approximately 2,000 jobs,” said Minister Thompson.

“Discussions leading to a Heads of Agreement, subject to the approval of the National Economic Council, will begin immediately on matters related to Bahamian employment requirements and Bahamian participation in specific areas.

“However, it is anticipated that Bahamians will have significant ownership participation in restaurants, retail stores, transportation and water sports.”

Minister Thompson noted that the joint venture project between RCI/ITM will not only combine the redevelopment of Freeport Harbor as a cruise port of choice, but will also transform the Grand Lucayan resort into a theme park, featuring water-based family entertainment, with dining, gaming and entertainment options and five-star hotel accommodations.

He noted that significant demand for both airlift and sealift to the destination is being created, including the unleashing of much-needed economic opportunities.

Since placing the Grand Lucayan on the market, there were over 62 expressions of interest from local and global firms. By February 14 of this year, eleven letters of offer were received and evaluated by the Board of the Lucayan Renewal Holdings Ltd.

According to Minister Thompson, on Friday, March 22, the Board, in carrying out its predetermined exit strategy, unanimously approved a resolution to recommend to the Prime Minister and the Cabinet, the sale of the Grand Lucayan to RCL/ITM.

The Minister noted that when considering all of the bids for the resort, one of the major components that went into their final decision was finding the company or entity that would create a unique destination for Grand Bahama.  “For us, it was more than just about trying to sell the hotel,” added Minister Thompson. “We knew we needed to do more, and creating a unique destination was at the forefront. The joint venture with Royal Caribbean and ITM fit that bill.”

Russell Benford, vice-president of Government Relations/Americas for Royal Caribbean said that coming to The Bahamas seemed like a perfect fit, considering the fact that the company was created with the Caribbean as its major destination.  “This is an incredible project and I want to thank the Bahamian Government for giving us this opportunity in Grand Bahama,” said Benford.  “We are honored to have been chosen from some really great people and companies around the world for this project.

“We build spectacular world class products and we will bring that same excellence and dedication here to this project in Grand Bahama.”

1st Insert: Minister of State for Grand Bahama, Senator the Hon. Kwasi Thompson, speaking during a press conference and official signing of Letter of Intent for the Purchase of the Grand Lucayan on Wednesday, March 27, 2019.   Looking on is President of the Senate, the Hon. Katherine Forbes-Smith.

2nd Insert: Mr. Russell Benford (centre), vice-president of Government Relations/Americas for Royal Caribbean, says the company is excited about the project in Grand Bahama and promised to bring excellence and dedication to the restoration and redevelopment of the Grand Lucayan resort, as well as redevelopment of the Cruise Port in Freeport.  At right is Mr. Mauricio Hamui, chief executive officer, ITM, and at left is Mr. Michael Scott, chairman of Lucayan Renewal Holdings Limited.