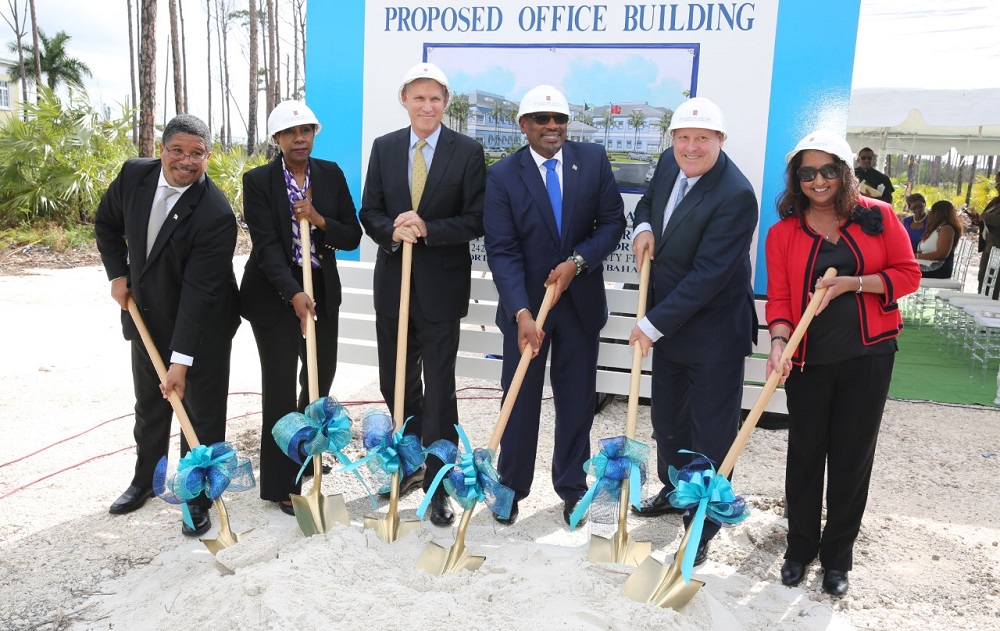 #Freeport, GB, February 21, 2019 – Bahamas – “After so many long decades of downturn and economic stagnation, the revival of Grand Bahama has begun,” said Prime Minister, the Most Hon. Dr. Hubert Minnis.

The Prime Minister’s remarks came during groundbreaking ceremonies, February 20, 2019 for a new Colonial Group International office complex in Grand Bahama. The new headquarters will be home to the CGI group of companies that provide group employee benefits to individuals and dependents in Bermuda and the Caribbean.

The new 12,000-square-foot structure for Freeport has a modern design and will be located on 1.5 acres on The Mall Drive, a prime location in the city.

Prime Minister Minnis noted that this investment represents $4 million into the Bahamian economy.

“The new CGI headquarters is a sign of the growing confidence in the renewal of Grand Bahama,” said Prime Minister Minnis, during the groundbreaking.

Prime Minister Minnis added that there is much room for growth in tourism, including cruise ship tourism, as both Freeport and Nassau will greatly benefit from new ports.

“The cruise lines and international investors recognize the great potential for both New Providence and Grand Bahama, which is why many companies are willing to invest in The Bahamas in tourism, technology and other sectors,” said Prime Minister Minnis.

“New port facilities will mean more jobs and businesses opportunities for New Providence and Grand Bahama during the construction phases and afterwards.

The Bahamas, and the ports of Nassau and Freeport in particular, are prime locations to visit for many millions of cruise passengers, who can sail to The Bahamas quickly because of our [close] location to Florida and the United States.”

“This is the very same confidence that we are seeing in the bids to purchase the Grand Lucayan, the temporary purchase of which by the Government of The Bahamas, was absolutely necessary,” added Dr. Minnis.

“The new CGI headquarters is a sign of the growing confidence in the renewal of Grand Bahama.  Again, congratulations to CGI on this groundbreaking and for your confidence in the revival of Freeport and Grand Bahama. It is a sign of good and more things to come.  But we still have plenty of work ahead to produce more jobs and more opportunity. We still have much work to do to grow and to expand our national economy, and the economy of Grand Bahama.  But, the revival has begun.”

Header: Prime Minister, the Most Hon. Dr. Hubert Minnis (third from right) and Deputy Prime Minister and Minister of Finance, the Hon. K. Peter Turnquest (left) were joined by executives from Colonial Group International to “turn the soil” as a part of groundbreaking ceremonies for a new Administration complex for CGI, on Wednesday, February 20, 2019.  Next to Minister Turnquest is Linda Gibson, CEO of Atlantic Medical Insurance (Bahamas); and, from left, Dr. E. Grant Gibbons, OBE, Chairman of CGI Group; Prime Minister Minnis; David Gibbons, Vice-Chairman of CGI; and Naz Farrow, CEO of CGI Group.

Insert: Prime Minister, the Most Hon. Dr. Hubert Minnis was the keynote speaker during groundbreaking ceremonies for the proposed office complex for Colonial Group International, February 20, 2019 on the Mall Drive in Freeport, Grand Bahama.   Also on hand for the ceremony were Deputy Prime Minister and Minister of Finance, the Hon. K. Peter Turnquest and Minister of Health, the Hon. Dr. Duane Sands.