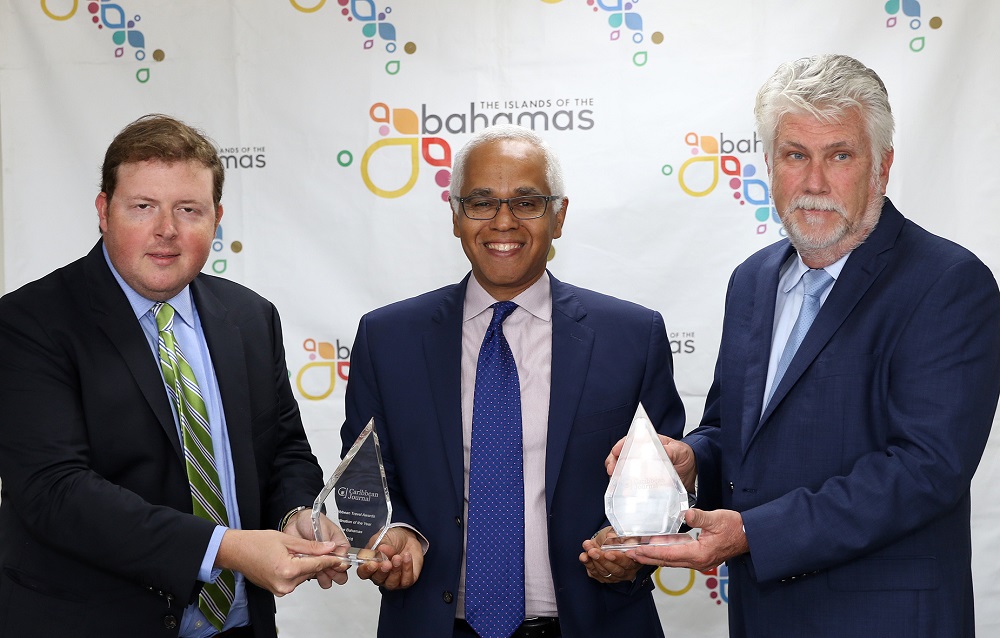 #Nassau, February 27, 2019 – Bahamas – The Bahamas’ “very impressive double-digit growth” in stopover arrivals across the destination, including the Family Islands, was a decisive factor in the country earning the Caribbean Journal’s ‘Tourism Destination of the Year’ designation.

Minister of Tourism and Aviation, the Hon. Dionisio D’Aguilar also earned the Journal’s ‘Tourism Minister of the Year’ designation “for shepherding this very complete and diverse growth this year.”

Alexander Britell, Founder and Editor-in-Chief of Caribbean Journal said The Bahamas’ “complete and diverse growth” over the past year “was very impressive.” Mr. Britell presented Minister D’Aguilar with the double awards during a brief ceremony held at the offices of The Bahamas’ Ministry of Tourism, downtown, Nassau, February 22, 2019.  Also present was Mr. Guy Britton, Executive Vice-President and Managing Director of Caribbean Journal.

Mr. Britell said the Journal’s Selection Process “is a very competitive process as the Journal’s Editorial Team looks at everything from hotel development to tourism arrival numbers, flights and brand awareness.”

“The Bahamas, for its very complete and diverse growth this year took home the crown and the Minister earned Minister of the Year Award for his efforts to shepherd that,” he said.

“In many ways, and this has happened several times, the two awards are intertwined. Sometimes when you win Tourism Destination of the Year, in large part, it is because you have a Minister who is stewarding that growth and making that growth happen. The Bahamas’ growth was very impressive this year because there was double-digit arrival growth across the destination, including the (Family Islands) which was a new thing.”

Mr. Britell said the results indicate that there is a growing awareness among travelers that The Bahamas is more than just Nassau and Grand Bahama.

“People are talking about Cat Island, Long Island, Eleuthera and Harbour Island and I think it was that complete overall impact and growth that was really eye-opening this year. It’s sort of a new Bahamas and people are really starting to see that (The Bahamas) its not just Nassau and Grand Bahama, but that it is all of the 700 islands and cays.”

Minister D’Aguilar said the recognition fortifies what officials at the Ministry of Tourism have been trying to accomplish in marketing The Bahamas as sixteen different destinations.

“I have said this over and over again, that there is no need to visit anywhere else in the Caribbean because in The Bahamas we have everything you could possibly want in a Caribbean vacation. In Nassau, which is our epicentre and where we have our large resorts, our guests can visit nice restaurants, shop in nice stores, visit the casinos, have that big resort feel, and go on wonderful excursions. Then we have our 15 other Family Islands that we market where you have that more intimate experience.

“It is delightful to see that our marketing strategy is working as The Bahamas, overall, had in excess of 16 per cent growth in stopover visitors and we are seeing that continue into this year with the growth spread over many of the islands.  Abaco is doing extremely well, up 17 per cent; Eleuthera is up a whopping 28 per cent; San Salvador is up 8 per cent; Andros is up 8 per cent and so we are seeing all of our major Family island destinations experience wonderful growth.

“It really brings about the culmination of what we have been trying to do at the Ministry of Tourism and that is to market our 16 different destinations. We have developed a credible strategy, launched a new marketing campaign. All of that is contributing to the phenomenal growth that we are seeing,” Minister D’Aguilar added.

Minister D’Aguilar said he was “delighted and humbled” to receive both awards.

“Delighted, that The Bahamas was selected by a reputable and well-known company such as Caribbean Journal as the Destination of the Year and then I am humbled to receive the Tourism Minister of the Year Award. I really am receiving this on behalf of the 376 hard-working members of the Ministry of Tourism. It is because of them that I am here today receiving this award. I am delighted and humbled to receive both of these Awards from the Caribbean Journal and I shall have them prominently displayed for everyone to see what wonderful things we are doing here in The Bahamas.”

s Caribbean Journal’s Destination of the Year Award from Alexander Britell, Founder and Editor-in-Chief and Guy Britton, Executive Vice-President and Managing Director during a brief ceremony at the Ministry’s offices, Downtown Nassau, February 22, 2019.