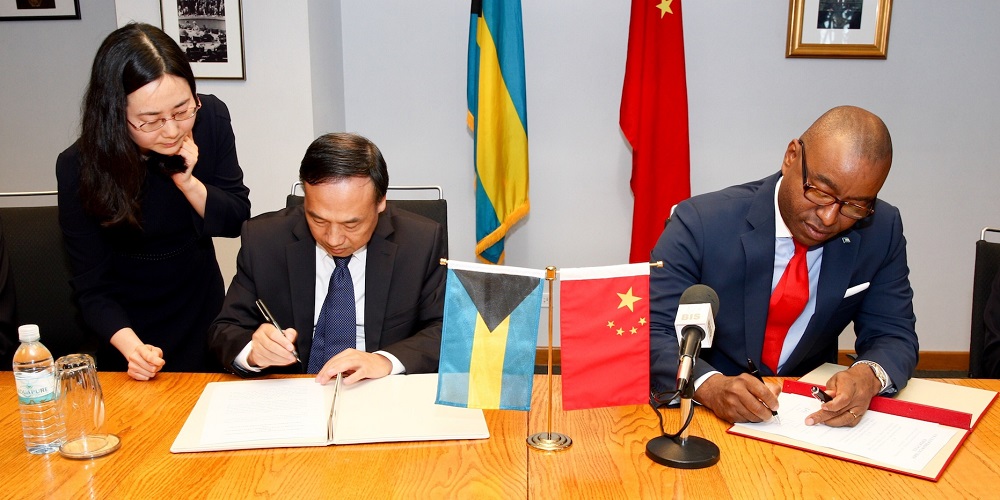 #Nassau, February 22, 2019 – Bahamas – The Government of The Bahamas, via the Ministry of Foreign Affairs has signed a $12 million bilateral agreement with the Government of the People’s Republic of China.  The Signing Ceremony took place on Thursday, February 21, 2019 at the Ministry, and is a commitment from China to provide funds for development projects in the country.

Minister of Foreign Affairs, the Hon. Darren Henfield thanked the Chinese Government for their commitment and said that the funds would be used for upgrades to the National Stadium and other Bahamian development projects.

“It is important to note that this agreement is the second such offer to The Bahamas in recent years, and, in total, the Chinese Government has donated approximately US$24 million in grants for Bahamian development projects,” said Minister Henfield.

Chinese Ambassador to The Bahamas, His Excellency Huang Qinguo said that today was a ‘good’ day for the two countries.  He said he was pleased to sign the agreement on behalf of the Chinese Government, and that partnerships such as these meet one of the Chinese people’s objective of assisting other developing nations.

“We hope that this new assistance provided by China can be used for projects to improve the livelihood and infrastructure for the people of The Bahamas,” he said.  “China has proactively promoted international development and cooperation with other countries for construction projects.”

During the signing ceremony, Ambassador Huang Qinguo advised that, as the largest developing country, China was interested in “providing assistance to the best of its ability to other developing countries within the framework of South-South cooperation,” and anticipated that the projects emanating from the grant would promote economic and social development in The Bahamas and improve the livelihood of Bahamians.

“The Bahamas Government looks forward to working closely with the Government of China as we continue to forge partnerships that are of mutual benefit to our two countries, and continue to build upon already robust relations,” said Minister Henfield.

Photo Caption: The Government of the Commonwealth of The Bahamas signed a $12 million bilateral agreement with the Government of the People’s Republic of China on Thursday, February 21, 2019 at the Ministry of Foreign Affairs. Pictured: Minister of Foreign Affairs, the Hon. Darren Henfield (right) and the Chinese Ambassador to The Bahamas, His Excellency Huang Qinguo.