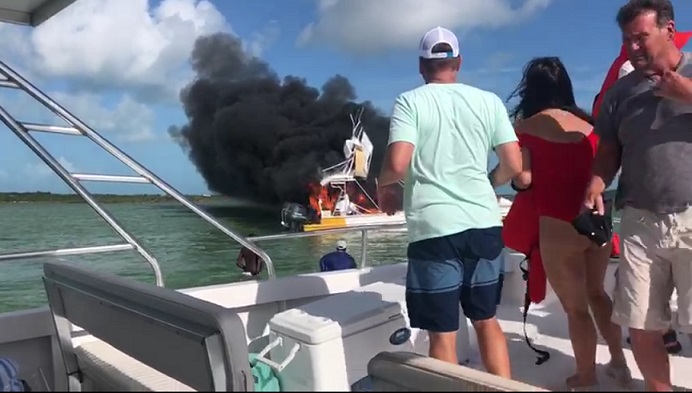 Photo from video sent to Magnetic Media from Exuma

#Exuma, The Bahamas – July 3, 2018 – The report of an American woman’s death in waters of the Exuma Cays is another heart-breaking visitor experience in The Bahamas as ironically guests were on their way to one of the most heart-thrilling adventures in the country; they were headed to see the famous Swimming Pigs.

The party of 10 guests and two Bahamians were horribly thrown off course by an explosion on board the 4Cs Excursion’s tour boat.

The Bahamas Ministry of Tourism and Aviation (BMOTA) issued a statement on Monday saying, “….deeply saddened by yesterday’s tour boat incident in Exuma. We pray for the family of the passenger who succumbed to her injuries, and offer our heartfelt condolences to her family and friends as they mourn her loss. Our prayers are also with all the other passengers who were aboard as they recover.”

The American woman reportedly jumped from the boat, a report to Magnetic Media is that her legs were severely cut in the propellers of the vessel.

Member of Parliament for Exuma, Chester Cooper issued a statement on Sunday; mere hours after the mishap.

Mr. Cooper added that the remaining six Americans were preparing for medical evacuation to Florida with the help of the U.S. Coast Guard.  It was explained that the others who were on board the boat do not have serious injuries; Mr. Cooper was also thankful in his media statement.

“My thanks to the Minister of Health, Dr. Duane Sands for his tireless efforts today.  Thanks to the dedicated medical staff in Exuma, Nassau and  Florida.  This is a sad day for Exuma and a sad day for our American friends.  We are saddened and our hearts are hurting, but we will get through this together.” 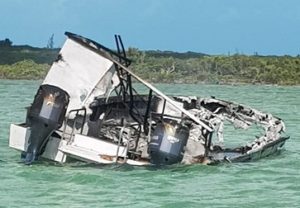 Bahamas Tourism explained, “The Ministry of Tourism immediately sought to lend assistance to those affected and continues to work on the ground to provide emotional support and to help facilitate any needed arrangements. The Exuma tourism team and the Ministry’s Visitor Relations Unit (VRU) have been working to comfort and care for those on the boat, their families and friends. This team works directly with visitors as a liaison with local authorities, health organizations, pastoral care and more. In this, the Ministry and VRU are coordinating with the Ministry of Health to provide as much relief as possible to these visitors during this difficult time.”

There were also kudos for the Royal Bahamas Police and the U.S. Coast Guard.

As for who is investigating the tragedy which happened around 10 a.m. on Sunday July 1, 2018; “The RBPF, Bahamas Maritime Authority and Bahamas Port Department are investigating the incident and the BMOTA awaits their updates and findings,” said the Ministry of Tourism.

News of this tragedy has been picked up by major media organisations in the United States including the Washington Post, CNN and the NY Post which posted this, “American Stefanie Schaffer sustained life-threatening injuries and was in critical condition after a double amputation, her family said. 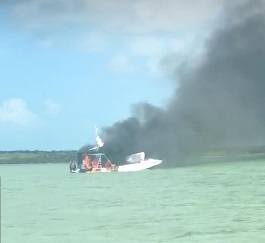