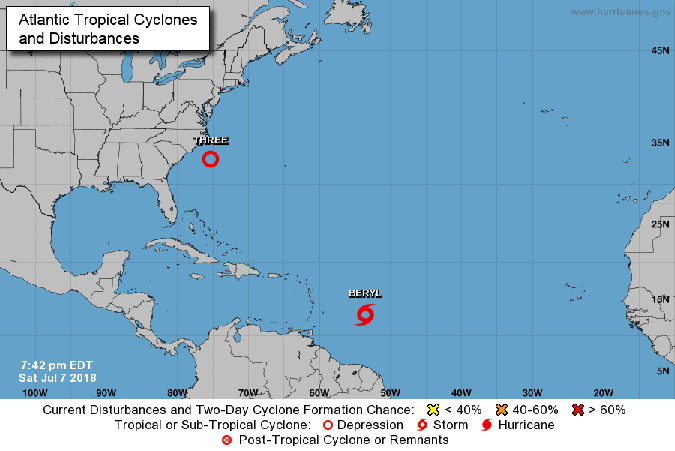 At 500 PM AST (2100 UTC), the center of Tropical Storm Beryl was
located near latitude 12.7 North, longitude 52.7 West. Beryl is
moving faster toward the west-northwest near 17 mph (28 km/h). A
west-northwestward motion with an additional increase in forward
speed is expected during the next few days. On the forecast track,
the center of Beryl will approach the Lesser Antilles through
Sunday, cross the island chain Sunday night, and move south of the
Virgin Islands and Puerto Rico on Monday.

Maximum sustained winds are estimated to be near 50 mph (85 km/h)
with higher gusts. Additional weakening is forecast during the
next 48 hours, and Beryl is likely to weaken to a tropical
depression after moving across the Lesser Antilles. The system
could degenerate into an open trough by the time it reaches the
central Caribbean Sea and Hispaniola Monday night.

Tropical-storm-force winds extend outward up to 45 miles (75 km)
from the center.